Hundreds of Jetstar Australia pilots and ground staff, including baggage handlers and ramp workers, carried out rolling strikes on Friday, Saturday and Sunday, forcing Qantas’s low-cost carrier to cancel scores of flights in the lead-up to the busy holiday period. The action, taken in a dispute over two separate, but related, enterprise agreements, involved 250 ground staff and dozens of pilots at airports in Melbourne, Brisbane, Cairns, Adelaide and Sydney.

At a number of airports, workers staged protests in or outside the terminal, appealing to passengers to support their struggle. 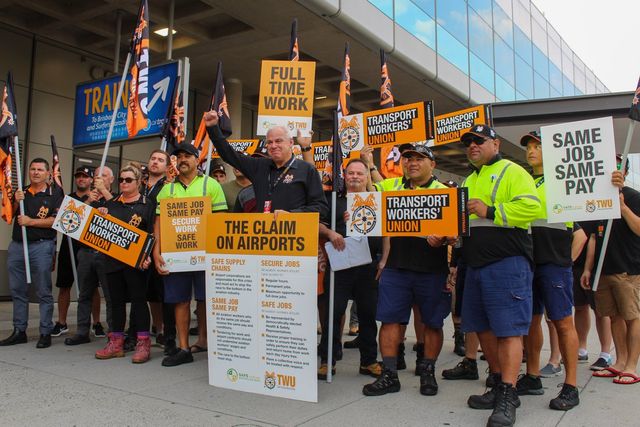 In a sign that the corporate elite is fearful that the resistance of airline workers will disrupt its cost-cutting agenda, and provide a focal point for a broader movement against the assault on wages and conditions, the Australian Financial Review revealed on Tuesday that Qantas CEO Alan Joyce was personally overseeing the response to the stoppages.

The article noted that Joyce is willing to reprise his role in a 2011 dispute, when Qantas locked-out 4,000 airline workers. That action, making use of the then federal Labor government's draconian Fair Work industrial laws, was followed by a sell-out agreement brokered by the unions, which slashed hundreds of jobs and enforced stagnant wages throughout the industry.

In a note to company executives on the weekend, Joyce declared that the company would not accept even the nominal pay increases being suggested by the unions. He stated: “Agreeing to higher wage claims puts the business in an unsustainable, uncompetitive position. We won’t do it.” Signalling that Jetstar is going on the offensive, Joyce has called for a 10 percent reduction in January flights, which will likely cost 50 pilots and many ground staff their jobs.

As in 2011, the aggressive actions of the company are only possible as a result of the collaboration of the transport unions. They have sought to isolate Jetstar staff and pilots from other airline workers, and have limited their actions to minimal rolling stoppages, while engaging in backroom discussions with company management. The Transport Workers Union, covering ground staff, has not publicly specified any future action, while the pilots’ union has ruled out strikes over the Christmas period, ensuring that there will be no major disruptions to Jetstar’s operations over the busiest period of the year.

The strikes by ground staff, which were overwhelmingly endorsed in a ballot conducted by the TWU, follow months of stalled negotiations over a new enterprise agreement.

The TWU has called for the ground staff, some who are paid as little as $25 an hour, to be granted a 4 percent annual pay rise. The union has also proposed an increase in the number of rest breaks, a minimum of 12-hour breaks between shifts and guarantees that the airline will employ more permanent workers rather than untrained casual staff. The demands also include an increase in the minimum hours of work that Jetstar is required to offer from the current 20 to 30 hours.

Management has insisted that any pay increase will be limited to 3 percent per annum. It has rejected all of the other demands.

The TWU has complained that Jetstar “has cut its staffing levels right back to the bone” and that “ground operations are dangerously understaffed.” It alleges that Jetstar allows broken equipment “to be kept in use,” endangering workers and passengers and causing “injury rates to go through the roof.” These statements are, above all, an indictment of the union, which has enforced these conditions in a series of sell-out enterprise agreements.

Jetstar has responded by claiming that its “resourcing” and safety practices are consistent with global aviation standards. SafeWork NSW, however, recently issued two official notices to Jetstar after carrying out an initial inspection of the airline’s domestic terminal at Sydney airport on December 12. The safety agency warned that “inadequate workplace safety procedures” at the terminal put workers in danger of being crushed or “ingested” by operational aircraft or by colliding with moving planes and engine fans.

To the extent that Jetstar’s claims are true, they only underscore the extent to which safety and workers’ conditions have been gutted throughout the global industry.

The TWU’s claims to be waging a struggle against the dire conditions facing Jetstar staff are belied by the union’s record. In 2016, it pushed through an enterprise agreement, that was initially rejected by ground staff, which mandated an 18-month pay freeze and cuts to working conditions. The union, like the company, insisted that the measures were necessary to overcome declining profit margins and avoid further downsizing.

In 2014, the airline unions imposed an enterprise agreement on 7,000 Qantas staff, enforcing an 18-month wage freeze and enabling the destruction of 5,000 jobs across the company’s operations. This resulted in the airline reaping a massive $688 million jump in its first-half profit from July to December 2015, reversing a $2.8 billion net loss for the year to June 2014.

The same pay freeze deal was accepted by the Australian Federation of Air Pilots (AFPA) at both Qantas and Jetstar. The pilots’ union is now calling for an annual wage rise of just three percent per annum, below the official rate of inflation.

That the company has rejected even these tepid proposals is the outcome of its determination to slash costs amid mounting competition throughout the airline industry, and its knowledge that the unions will do everything possible to enforce management’s demands.

The profits initially reaped by the introduction of the low-cost carrier model have dried up, with major airlines increasingly engaged in direct competition with “budget” lines such as Jetstar. Tigerair, Jetstar’s chief competitor, posted a loss of $45 million last year, prompting a major restructure, which is being enforced by the unions. In addition to competition, the airlines have cited fuel costs as a major factor in the profit squeeze.

The attacks on Jetstar staff are part of a global offensive that has been waged by the major global companies over the past five years, resulting in the destruction of tens of thousands of jobs.

As the WSWS noted in September: “Air France this year announced it will slash over 460 jobs in its short haul business, after it posted a loss of €189 million in 2018. Low cost carrier Ryan Air announced in June that it will cut up to 900 air crew jobs and close a number of bases, while Romanian carrier Tarom will axe more than 300 jobs. Some 1,700 workers were sacked after the Berlin-based Germania airline filed for bankruptcy. Four other airlines also ceased operations in the first four months of this year.”

Amid a resurgence of the class struggle internationally, this offensive is encountering growing opposition. In April, 1,400 Scandinavian Airlines pilots took strike action after a decade of wage freezes and pay cuts. In August, Ryanair staff, spanning from Ireland to Portugal, engaged in a campaign of industrial action which disrupted the company’s operations throughout Europe. The following month, 4,000 British Airways pilots stopped work to demand improved pay and conditions, in the largest strike in the company’s history.

Each of these struggles, including the Jetstar strikes, have revealed the immense social and political power of pilots and airline workers, who set into motion infrastructure that is crucial to the functioning of modern society. In each dispute, airline employees have confronted the unions as agents of management and committed to imposing its dictates.

The record, in Australia and internationally, demonstrates that Jetstar workers can only take their struggle forward through a rebellion against the TWU and the AFPA. They must turn to other sections of airline workers in Australia and around the world. This is possible, and necessary, in an industry that is dominated by a handful of global corporations and that is inherently international.

What is needed are independent rank-and-file committees tasked with coordinating a genuine industrial and political campaign to defeat the attempts of the unions to enforce yet another wretched sell-out. Such committees will confront major political issues including the necessity to transform the major airlines into publicly-owned utilities, operated under workers’ control.