In the letter, Trump charges the Democratic majority in the House of Representatives with “violating your oaths of office," and declares that "you are breaking your allegiance to the Constitution, and you are declaring open war on American Democracy.” 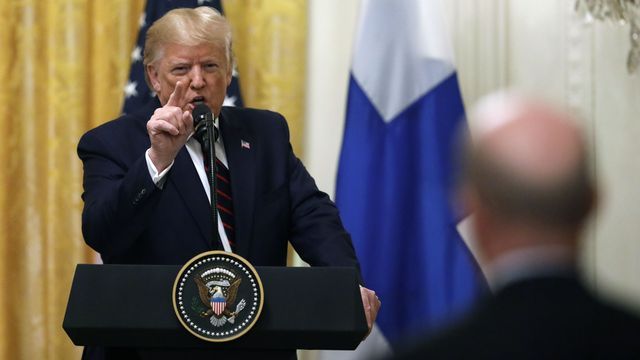 The letter is, in other words, a threat of something Trump alluded to early on in the impeachment process—“civil war.”

The document is couched in incendiary language never before used by an American president. Trump accuses the speaker of the House of Representatives of “spiteful actions,” which display “unfettered contempt for America’s founding.” He declares that House Intelligence Committee Chairman Adam Schiff “cheated and lied,” and presents himself as a victim of a “Democrat conspiracy.”

That such language can be leveled at a congressional majority by a president is a testament to the breakdown of constitutional forms of rule in the United States.

Since his election, Trump has systematically sought to destroy any legal and constitutional limits on his presidency, expressed most directly in his appropriation of military funds for his border wall, in defiance of Congress, by declaring a “state of emergency.”

Trump has used these funds to create concentration camps on the US Mexico-border and carry out family separations that human rights organizations have compared to torture. He has repeatedly threatened to remain in power beyond constitutionally mandated term limits and has indicated that he will not accept as legitimate an election that leads to his defeat.

Trump has systematically cultivated a fascistic political base, with repeated and deliberate overtures to white supremacists and neo-Nazis. He has sought to build up a praetorian guard in the military, the police and the border patrol, which are saturated with his fascistic supporters.

He is now using the Democrats’ impeachment process as a means to rally this fascistic base into action, with dangerous and unforeseeable consequences.

In portraying himself as the victim of a “conspiracy” to subvert the Constitution, Trump is exploiting the fraudulent character of the Democrats’ impeachment drive, which centers on factional differences within the state over foreign policy.

The most striking element of the impeachment, and what gives it the element of a palace coup, is its complete remoteness from and indifference to any demands of a popular character.

While Trump is seeking to exploit the impeachment to rally a right-wing movement, the Democratic Party is fearful of and hostile to mobilizing mass popular opposition to Trump.

This has created a situation in which, far from defending the Constitution, the Democrats have only facilitated the assault on democratic rights by Trump.

Trump’s letter to Pelosi declares, “Your Speakership and your party are held hostage by your most deranged and radical representatives of the far left. Each one of your members lives in fear of a socialist primary challenger—this is what is driving impeachment.”

In other words, Trump portrays himself, in a fascistic trope, as the victim of a socialist plot. The letter seeks to brand opposition to the Trump administration as essentially criminal—as support for a “coup” and an attack on the Constitution.

Trump is immensely hated, maintaining a lower approval rating than any other president at a similar point in his tenure. Polls have consistently shown that Trump’s real crimes—including the torture of thousands of immigrant children—are the reason that a substantial portion of the population wants to see him removed from office.

Candidate Trump, who on election day maintained a higher disapproval rating than any previous major party candidate in history, massively lost the popular vote—by 2.8 million ballots. The fact that he assumed the presidency was attributable only to the anti-democratic Electoral College, which disproportionately favors right-wing candidates.

Even as they have moved ahead with their impeachment drive, the Democrats have granted Trump a sweeping series of legislative victories, including a massive expansion of military spending, reductions to congressional limits on the use of military force and funding for his border wall. Indeed, the planned vote on his impeachment is bookended with Tuesday’s bipartisan passage of the National Defense Authorization Act and the House's passage of a White House-approved budget, and Thursday’s planned passage of the anti-Chinese USMCA trade agreement.

Both factions in the intensifying struggle within the state are characterized by deep disorientation and crisis. Trump’s comments are unhinged, denouncing elements of his own government as being engaged in a criminal conspiracy. But this is no less true for the Democrats, who have spent years investigating the allegation that Trump is a traitor in bed with the Russians.

Each in its own way, both sides are haunted by the specter of the growth of the class struggle in the United States.

While Trump denounces the Democrats as socialists—his euphemism for any form of popular opposition to his administration—the Democrats are terrified of doing anything that could evoke broader popular support. They have conducted their struggle as an inside operation, relying on factions within the state that oppose Trump.

No progressive solution to the crisis is possible within this framework. Should impeachment fail, Trump would emerge politically strengthened. Should it succeed, it would lack popular legitimacy among broad sections of the population. Its only direct effect would be to escalate the conflict with Russia.

The fascist in the White House constitutes an immense danger to democratic rights and must be forced from power. But this urgent and historic task cannot be left in the hands of the Democrats. It can be achieved only through an independent mobilization of the working class in intractable opposition to all factions of the American financial oligarchy.