A drawdown of US troops from Washington’s 18-year-old war in Afghanistan will facilitate their redeployment to the Asia-Pacific region as part of the US military buildup against China, US Defense Secretary Mark Esper told reporters this week.

The remark came amid reports that some 4,000 of the roughly 13,000 US troops now deployed in the war-ravaged country may be pulled out within weeks. During his unannounced and lightning trip in and out of the heavily fortified US Bagram air base north of Kabul on Thanksgiving, Trump said that he was considering cutting the number of troops in Afghanistan “very substantially.” 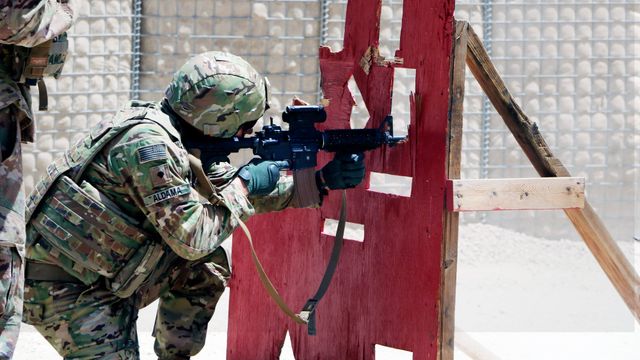 US soldiers in Afghanistan [Credit: US Military]

Esper explained the geo-strategic calculations underlying such a withdrawal, which have nothing to do with Trump’s demagogy about ending Washington’s “endless wars.”

“I would like to go down to a lower number because I want to either bring those troops home,” he said, or order them “redeployed to the Indo-Pacific to face off our greatest challenge in terms of the great power competition—that’s vis-a-vis China.”

The withdrawal of 4,000 US personnel would bring the total US troop strength back to the level that Trump inherited from the Obama administration, which had brought the number down to 8,600.

Trump’s escalation of the US intervention in August 2017 came in response to demands from his then-Defense Secretary James Mattis, and over the previous objections of his fired chief political strategist, the extreme right-winger Stephen Bannon, who had opposed any escalation in the Middle East as a diversion from the US-China conflict.

Responding to Pentagon reporters while flying back from a ceremony in Belgium marking the 75th anniversary of the Battle of the Bulge, Esper said that while he believed “the best solution for Afghanistan is a political agreement,” the troop withdrawal could be accomplished “with or without an agreement.”

The Trump administration resumed negotiations with the Taliban on December 7 in the Gulf oil sheikdom of Qatar. Previous talks were abruptly broken off in September on the very eve of a scheduled signing of a peace deal at Camp David, the US presidential retreat in Maryland.

Ostensibly, Trump called off the deal because of an attack in Afghanistan that took the life of an American soldier. In reality, the White House backed out in the face of what it anticipated would be criticism, particularly from Democrats, over meeting with the Taliban at Camp David on the eve of the anniversary of the September 11, 2001 attacks, which were used as the pretext for the US invasion of Afghanistan.

The Taliban has made its acceptance of a peace agreement with Washington conditional on the complete withdrawal of US and other foreign troops from Afghanistan.

A drawdown of 4,000 troops, according to Esper, would still allow the US military to carry out its principal objectives: search-and-kill missions by US special forces, and the continuation of the “train, advise and assist” operation with the Afghan security forces.

The massive $738 billion US military spending bill—the largest in history—which was approved with the overwhelming support of both parties in the US House and Senate, includes $4.5 billion for the training and support of the security forces of the US-backed regime in Kabul.

The Pentagon’s strategy is to back these forces with the increasing use of American airstrikes in an attempt to stave off the Taliban, which controls the largest areas of the country since the regime it headed was overthrown by the US invasion 18 years ago.

The escalating US bombing campaign is one of the main factors in driving up civilian casualties to the highest numbers seen since the UN Afghanistan mission began keeping figures.

Last year, 3,804 Afghan civilians were killed in the war. US airstrikes killed 579 civilians in the first 10 months this year, a third more than in 2018. According to UNICEF, 631 children were killed and another 1,830 wounded in military attacks in just the first nine months of this year. This marked an 11 percent increase over 2018.

Esper’s statement about drawing down US forces from Afghanistan and turning them against China comes barely a week after the Washington Post published the “Afghanistan papers,” consisting of interviews with hundreds of US military commanders and civilian officials that provided a damning indictment of the criminality and abject failure of a nearly two-decade-old imperialist intervention that was launched and continued based upon lies.

While the Pentagon has dismissed this devastating exposure, it is clear that the US military and intelligence apparatus and the ruling establishment in Washington want to bring an end to the US intervention. It has, however, no basis for believing that the corrupt and increasingly isolated Afghan government and security forces—described by one of those interviewed in the “Afghanistan Papers” as the “bottom of the barrel,” with one-third of them consisting of “drug addicts or Taliban”—have any ability to remain in power without US armed support.

While Washington continues to wage its bloody 18-year-long war in Afghanistan and is escalating its military threats against Iran, the thrust of US strategy and of the massive new US military spending bill is the preparation of war with what the US National Security Strategy released in 2017 described as “revisionist powers” and “hostile competitors” that were challenging “American power, influence, and interests, attempting to erode American security and prosperity,” i.e., Russia and China.

Even as Esper talks about redeploying US troops from Afghanistan to the Indo-Pacific, in continuity with the Obama administration’s “pivot to Asia,” the Pentagon is engaged in feverish preparations for the most massive US military exercises aimed against Russia since the height of the Cold War.

Some 20,000 US-based troops are set to begin deploying to Europe in February, joining more than 9,000 already on the continent for the “Defender Europe-20” war games that will bring the American soldiers together with 13,000 pieces of equipment, including battle tanks and artillery, to within striking distance of Russia’s borders.

Gen. Jeffrey Kramer, who is in charge of the exercise, described it as “the biggest thing since Reforger,” the maneuvers that were carried out between 1967 and 1988 against the Soviet Union.