Protracted negotiations between the Rail, Tram and Bus Union (RTBU) in Victoria and the operators of the city and regional train and tram networks are at an impasse, with the transnational corporations and state Labor government refusing to make any concessions on wages and conditions.

In response, the RTBU is isolating the workers, keeping entirely separate the attempted imposition of three new enterprise bargaining agreements covering workers for Yarra Trams, Metro Trains, and the regional V/Line train network. The union has organised nothing but token industrial action, while keeping workers in the dark and subordinating them to draconian Fair Work industrial laws. This industrial legislation was originally drafted by the former federal Labor government, in collaboration with the trade union bureaucracy. 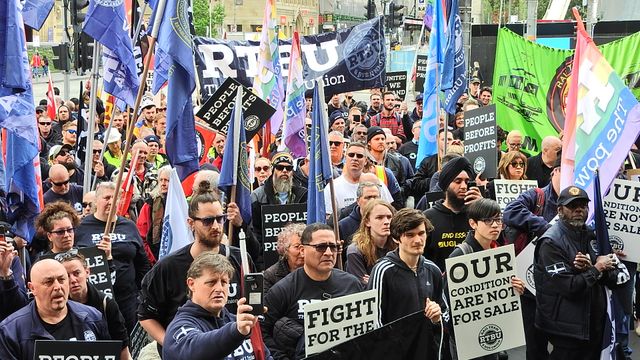 The V/Line network was privatised in 1999, but returned to nominal public ownership in 2002, after corporate operators proved unable to gouge sufficiently acceptable profits from regional train passengers. This month’s stoppages were organised separately across different train lines. RTBU Victorian branch secretary Luba Grigorovitch stated: “We’ve deliberately tried to be strategic because ultimately we don’t want the regional network to come to a halt.”

The union has requested a 6 percent annual wage increase, against the 2 percent offered by the state government owned operator. Workers continue to struggle with crushing workloads caused by substantially higher passenger numbers in recent years, without any commensurate increase in staff numbers.

Grigorovitch, a former Labor parliamentary staffer and aspiring parliamentarian, has urged the state Labor government of Premier Daniel Andrews to intervene. She last week accused Public Transport Minister Melissa Horne of being “out of her depth” and “missing in action.” The union chief complained that she had been attempting to finalise an agreement since the beginning of the year. “The RTBU is always ready to negotiate when V/Line and the government are ready to take these talks seriously,” she explained.

Grigorovitch’s appeal to the state government is a warning to rail workers. In 2015, the Labor government intervened in a dispute by metropolitan train drivers, siding with the company in banning industrial action, and helping impose a regressive new enterprise agreement.

At the same time as regional train workers have been driven into an impasse by the RTBU, tram drivers and other staff at Yarra Trams also remain without an agreement.

Melbourne has the world’s largest operational tram network, with 250 kilometres of double track. The RTBU, however, has prevented the workers from exercising their enormous industrial power. As for the V/Line workers, nothing more than token stoppages have been organised. Tram workers were authorised to stop work for four hours, between 10 a.m. and 2 p.m. (non-peak hours), on November 28 and December 5. This followed two similar four-hour stoppages in August.

Yarra Trams controls a wholly privatised network, operated by Keolis Downer, a joint corporate venture between Downer Group (annual revenue $12.6 billion) and French transport giant Keolis (annual revenue $9.7 billion). Company management is attempting to impose a 3 percent nominal annual wage rise, barely in keeping with cost-of-living increases, while undermining working conditions through various concessions. The most important of these is the hiking of a cap on the hiring of part-time tram drivers, currently set at 4 percent of the current workforce. Yarra Trams initially demanded this be raised to 35 percent, before dropping it to 15 percent.

Metro Trains workers, covered by the RTBU, also confront a determined corporate enemy. Melbourne’s privatised train network is majority owned by the Hong Kong-based giant MTR Corporation. It wants to cap nominal wage rises to 2 percent annually, while the RTBU has requested 6 percent. Other company demands are similar to those of Yarra Trams management, including concessions on workplace conditions such as reduced minimum hours for part-time workers and the effective elimination of restrictions on the proportion of part-time staff employed.

Metro Trains has used Fair Work industrial laws to mount an aggressive legal campaign against any industrial action, however limited. The RTBU’s response has been to grovel before the courts, keep workers in the dark about what is underway, and, above all, to work to maintain the subordination of the workers to the Fair Work regime.

On August 9, Federal Court Justice John Snaden prohibited planned industrial action involving Metro Trains workers refusing to check passengers’ tickets and opening up all barriers to allow free movement. This, the judge insisted, was “unlawful, illegitimate or unconscionable,” because police still had the power to fine train passengers without valid tickets, and Metro Trains “stood to lose significant sums of revenue in circumstances that would realistically defy precise calculation.”

This was followed by another anti-democratic ruling issued on December 6, which appeared to exclude any authorised industrial action.

Prior to the ruling, there were three days of hearings, held October 15–16 and November 6. The court heard Metro Trains lawyers argue that the RTBU had not fully upheld previous court orders that it call off the proposed ticket check work ban, through statements on social media and the internet, advertisements in newspapers, and notices places in all train stations. The court hearings featured a literal minute-by-minute account of what members of the RTBU bureaucracy did after receiving this order, including details of private phone calls and text messages with one another. This demonstrated the extraordinary and antidemocratic reach of the Fair Work laws.

The union challenged none of this. At an RTBU-organised rally outside Melbourne’s Flinders Street station on October 17, timed to coincide with the scheduled end of the Federal Court hearings, the union provided no information about the legal proceedings. Union officials engaged in vacuous rhetoric while saying nothing about what Metro Trains workers confronted.

Only a minority of the few hundred people in attendance were Metro Trains workers, with most being officials of the RTBU and other unions.

One train driver spoke with the World Socialist Web Site: “It’s about the conditions,” he emphasised. “It’s cost shifting. At the moment, if Metro Trains need a driver to go from [the western Melbourne suburbs of] Sunbury to Newport, to do a dock and prepare a train, that driver moves to Newport on their time, the driver gets paid for it. By shifting it and changing the way we work, they are shifting that time and that pay from the company back to the worker. We are paying because we’ve got to get ourselves to that location. It’s our car, it’s our fuel, it’s our time. So instead of eight hours or an 8 and a half hour shift door to door, that might be a 10 or an 11 hour shift.”

In the course of a discussion about the global capitalist crisis, the worker said that he felt that he was “moving to the left,” reflecting a growing militancy within the working class. The train driver also expressed his frustration with the RTBU and agreed that workers needed to organise independently of the trade union bureaucracy. He and another worker debated whether the train network ought to be organised as a workers-run collective or co-operative, after being taken out of private ownership.

After the rally, RTBU Victorian chief Luba Grigorovitch issued a grovelling apology to the Federal Court “for the failure of the RTBU to fully comply with the Orders of the Court made on 9 August 2019 and to also convey to the Court the union’s remorse for that non-compliance.” The basis of this was the union’s failure to post their abandonment of the ticketing action on its national Facebook page, even though they had posted it on the Victorian division’s Facebook page.

The judge nevertheless again sided with Metro Trains, rejecting a union request to overturn the August Federal Court ruling. The judgement appears to leave no avenue for any further authorised industrial action whatsoever.

In a December 6 statement issued to its members, the RTBU bureaucracy declared that it was “disappointed” with the court ruling, adding that “union strength means staring down your defeats and getting on with the job at hand in continuing to represent our members in seeking the best possible outcome possible under the EBA.”

There have been no further RTBU public statements on the Metro Trains industrial agreement since the December 6 capitulation to the Fair Work regime. As the RTBU seeks to further isolate and wear down the workers, it has received notable support from the pseudo-left Victorian Socialists. One of their three candidates at the last Victorian state election, Kath Larkin, billed as a trade union militant in the election campaign, serves as the RTBU’s Deputy Women’s Officer. Victorian Socialists have nevertheless said nothing about the train and tram drivers’ fight, apart from two short Facebook posts last August, one of which declared, “We really need the Rail Tram and Bus Union to win.”

If regional Victorian and Melbourne train and tram workers are to succeed in resisting the corporate offensive against their working conditions, which is being backed by the state Labor government and enabled by the RTBU, the only way forward is to take the struggle out of the hands of the union bureaucracy.

Rank-and-file committees of train and tram workers must be formed in every depot and station, and mass meetings convened to develop the widest discussion among workers as to how to develop the fight in defence of wages and conditions. Train and tram workers are engaged in a political fight against the Andrews government, and its pro-privatisation agenda. They can win the active support of the entire working class by developing a campaign for the abolition of the widely despised transport privatisation measures, at the same time fighting for the widest unified struggle of all workers now confronting attacks on their jobs, wages, and conditions.