The most striking aspect of the sixth Democratic presidential candidates’ debate, held Thursday night in the aftermath of Trump’s impeachment, was the questions that were not asked by the moderators and the issues that were not addressed by the participants. 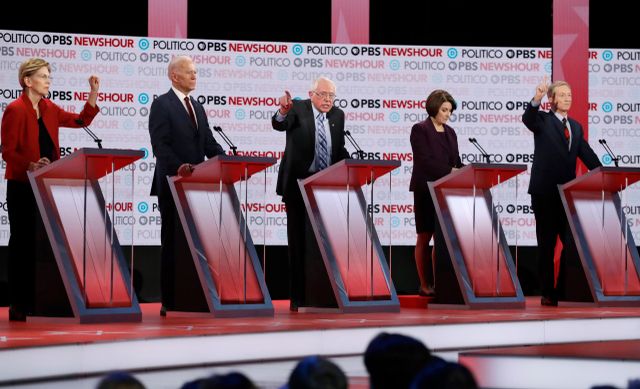 The candidates repeatedly stressed the urgency of ousting Trump in 2020 and jousted over which of them was best placed to accomplish the task. This was combined with populist rhetoric attacking billionaires and pledges to increase taxes on the rich to pay for better health care and schools and a more humane immigration policy.

Yet neither the moderators of the Los Angeles event nor any of the candidates raised the fact that the House vote approving articles of impeachment against President Trump was bracketed by congressional votes in which the Democratic Party voted by wide margins to pass the White House’s key legislative priorities.

These include a massive increase in military spending, a new North American trade pact (USMCA) directed particularly against China, and continued funding of Trump’s anti-immigrant border wall with Mexico.

This convenient omission of the basic agreement between the Democratic Party and Trump on militarism, trade war and attacks on democratic rights illuminates the sheer cynicism and hypocrisy of the event, and the fraud of the Democrats’ posturing as an alternative to Trump for “working people” or the “middle class.”

Another remarkable omission was any discussion of the candidates’ policies toward Ukraine. The name of the country does not even appear in the transcript of the more than two-hour event. Russia was mentioned only once by name, by Andrew Yang, and the name “Putin” appears only once, in a remark by former Vice President Biden.

This is extraordinary given the fact that the debate was held barely 24 hours after the Democratic-controlled House of Representatives voted in a party-line vote to make Trump the third president in US history to be impeached, based on his withholding of military aid to US ally Ukraine, said to be waging a “hot war” against Russian aggression.

There was no discussion of how the seven candidates, if elected, would reverse Trump’s supposedly “dovish” posture toward Moscow and escalate the US diplomatic, economic and military confrontation with nuclear-armed Russia, something which has virtually no popular support among the American people.

It seemed that both the moderators, led by “PBS NewsHour” anchor Judy Woodruff, and the Democratic contenders were eager to dispense with the entire issue of impeachment as quickly as possible. Woodruff raised it as the first question, noting the failure of the Democrats in the course of three weeks of public hearings to generate strong majority support in the country for the removal of Trump from office. None of the candidates in their answers addressed her question as to why this was the case and what they would do to build greater support for impeachment. After a few perfunctory minutes of canned replies, the issue was dropped.

Another omission that, while entirely predictable, nevertheless underscored the two-facedness of the Democratic campaign, was the cases of imprisoned journalist Julian Assange and the whistle-blower Chelsea Manning.

Two so-called “centrist,” i.e., right-wing, candidates, Pete Buttigieg and Amy Klobuchar, both raised the issue of freedom of the press to attack Trump for his baiting of the largely pro-impeachment media. Klobuchar, noting that her father was a newspaperman, declared that “the freedom of the press is deep in my heart.” But she and the rest of the Democrats, including the so-called “progressives” Bernie Sanders and Elizabeth Warren, support the persecution and jailing of Assange and Manning precisely for exercising press freedom in exposing US war crimes.

On the question of China, the candidates, if anything, sought to outflank Trump from the right in demanding an escalation of the US drive to cripple China and prevent it from dislodging the US as the premier Pacific power. Biden said he would seek UN international sanctions against China for its alleged human rights abuses against the Muslim Uighurs.

“We should be moving 60 percent of our sea power to that area of the world,” he declared, “to let, in fact, the Chinese understand that they’re not going to go any further… we’ve got to make clear, we are a Pacific power and we are not going to back away.”

Buttigieg said he would consider boycotting the 2022 Beijing Olympics. Klobuchar said, “I think we need to keep our promises and keep our threats.”

A major focus of media post-mortems of the debate was what commentators described as an angry “eruption” between Buttigieg and Warren. This squabble, however, only exposed the fraud of the various candidates’ attempts to portray themselves as clean-hands opponents of the corporate elite.

At one point, Warren, looking for a way to attack Buttigieg, who has reportedly been climbing at her expense in Iowa, where the first primary contest will take place in seven weeks, proclaimed her independence from corporate campaign money and denounced the Indiana mayor for holding a fundraiser for wealthy donors in a wine cave.

Sanctimoniously stating, “I will not sell access to my time,” Warren added, “Billionaires in wine caves should not pick the next president of the United States.”

Buttigieg bluntly defended taking money from corporate donors and replied coolly, “This is the problem of issuing purity tests you yourself cannot pass.” He then noted that Warren had accepted donations from corporations and financial interests in her prior Senate election campaigns and channeled left-over funds into her presidential war chest.

As for Vermont Senator Bernie Sanders, he continued to posture as a populist and quasi-socialist tribune of working people and bane of the “billionaire class.” He repeated his rhetoric about a “political revolution”—meaning nothing more than electing him as president and Democrats to national, state and local office.

He declared, “We are living in a nation increasingly becoming an oligarchy, where you have a handful of billionaires who spend hundreds of millions of dollars buying elections and politicians… The issue is not old or young, male or female. The issue is working people standing up, taking on the billionaire class, and creating a government and economy that works for all, not just the 1 percent.”

Sanders is fully aware that in making such statements, he is talking out of both sides of his mouth. That he has no intention of conducting the type of struggle—requiring a real revolution—needed to transform the American economy into one that “works for all,” is revealed by the fact that he is running to represent a party that supports the same basic policies as the fascist Trump, as demonstrated in the budget and USMCA votes this week.

This is a party, moreover, that completed the deregulation of Wall Street under Bill Clinton and responded to the ensuing crash of 2008 by allocating trillions of tax-payer dollars under Obama to bail out the criminals responsible for the crisis. The bill for this rescue operation is still being paid by the working class in the form of mass layoffs, wage cuts and the destruction of health care, education and pensions.

On the issue of trade war with China, Sanders staked out a position to the right of other candidates in the debate. Boasting that he had voted against the now-superseded North American Free Trade Agreement (NAFTA), he said the new pact did not go far enough.