Over 1,500 steelworkers to lose their jobs as US Steel announces idling of Great Lakes Works outside of Detroit

US Steel announced Friday, just days before the Christmas holiday, that it is issuing layoff notices to 1,545 workers at its Great Lakes Works facility south of Detroit. Next year it will idle most of the mill and shift production to Gary Works in Gary, Indiana, pitting workers in the same region against one another for a dwindling supply of jobs.

Company spokesmen told the Northwest Indiana Times that US Steel’s goal is to make the remaining jobs “more secure and sustainable” and “help the company reach its goal of reducing greenhouse gas emissions by 20 percent by 2030.” In other words, the new jobs will likely pay lower wages with fewer benefits. 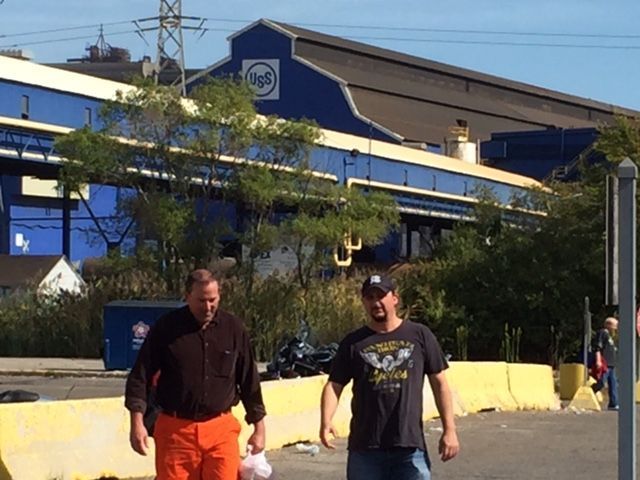 US Steel issued layoff notices to 200 workers at Great Lakes Works in September in the wake of an announcement that one blast furnace was to be idled.

US Steel President and CEO David Burritt, who was paid a total of $11.6 million in 2018, offered typically empty words after the announcement of the layoffs: “These decisions are never easy, nor are they taken lightly. However, we must responsibly manage our resources while also strengthening our company’s long-term future—a future many stakeholders depend on.”

Gary Works is the largest steel mill owned and operated by Pittsburgh, Pennsylvania-based US Steel. Last month, the corporation announced the layoff of an undisclosed number of non-union employees at the mill and speculation rose over whether or not the layoffs would impact the plant’s eligibility for state economic incentives used to subsidize its $750 million investment into the Gary Works mill.

The Indiana Economic Development Corp. is requiring US Steel to retain a minimum of 3,875 employees in the state to qualify for a $10 million incentive package, in addition to the $35 million package from the city of Gary over a 25-year period. US Steel also received a $40 million tax benefit from the US federal government in 2018 on top of a total $432 million in profits worldwide.

A former steelworker from Indiana spoke to the World Socialist Web Site about the significance of the closure of the Great Lakes Works. “I was shocked and saddened by today’s news," he said. "It’s hard to accept that [the companies that control] your livelihood, means of financial support and stability can just decide to shutter their operations. It’s not just the 1,545 who will undergo drastic lifestyle changes. The many companies who furnish the mills with contractors and materials, or who supply services, will also be hurt by this action. The entire region will lose huge parts of its tax base.”

The United Steelworkers (USW) union has maintained virtual silence in response to the latest jobs bloodbath in the steel industry. The union paved the way for these attacks on jobs in the 2018 contracts it signed with US Steel and ArcelorMittal, the two largest raw steel producers operating in the US.

Despite a unanimous strike vote among rank-and-file workers at US Steel and ArcelorMittal in the fall of 2018, the USW refused to mobilize workers to strike. The union then rammed through concessions contracts that allowed the steel corporations to continue generating massive profits at the expense of workers’ working conditions and living standards, while offering no job protections and no guarantee of benefits and decent wages for new-hires.

The USW has been one of the earliest and most vocal proponents of tariffs on imported metals, specifically aimed at China, criticizing these measures only when it believed they did not go far enough. In this way, the USW has stoked nationalism, pitting workers in the US against their brothers and sisters in other countries in a cutthroat bidding war to the detriment of all workers.

The latest announcement of mass manufacturing layoffs in the US reveals as well the fraud of the nationalist demagogy promoted by the Trump administration, the trade unions and sections of the Democratic Party. Workers who were falsely led to believe that trade war measures and other forms of protectionism would protect jobs and wages are now being forced to confront the reality behind these lies.

Plant closures are not the result of “unfair trade,” as endlessly claimed by the unions, but the inevitable outcome of the operation of the laws of the capitalist profit system. Despite this, the USW and other unions have used the call for economic nationalism and protectionism as a justification for collaboration with the bosses in the drive to undercut overseas competitors.

As a consequence of the trade war measures initiated by the Trump administration, there is now overcapacity in the steel industry. Steel prices in the US rose at the beginning of 2018 after the Trump administration’s 25 percent import tariffs against foreign steel were initially rolled out, targeting China in particular. Since then, as companies around the world have opted for cheaper alternatives and countries have retaliated with their own tariffs, steel prices have dropped significantly.

As a consequence of market turmoil sparked by the protectionist measures, US Steel stock prices are currently down to $11.87 per share compared to $45.39 per share in February 2018, just before tariffs were launched by the Trump administration.

Workers are the ones who are forced to pay the consequences of deepening recession and trade war, with the upending of their lives and ever-greater attacks on wages and working conditions. Meanwhile, the communities that depend on steel jobs are facing economic ruin. The situation confronting workers in Michigan is being replicated across the US and around the world.

The announcement of the idling of the Great Lakes Works comes one year after the announcement by General Motors that it would shutter four facilities in the US and one in Canada. Meanwhile, Ford has closed one plant in the US along with cutting 7,000 jobs in the US and 12,000 across Europe. German automakers Mercedes-Benz and Audi announced the slashing of a combined total of 19,500 jobs in Europe. In India and China, 570,000 auto manufacturing jobs were cut this year.

The growth of strikes and struggles by workers in country after country demonstrates the willingness of workers to fight back against the corporate onslaught against jobs and living standards. However, to wage this fight workers need a new program and perspective. In the first place, workers must reject the nationalist poison promoted by the unions and adopt an international strategy aimed at uniting workers worldwide.

The claim that the resources do not exist to provide decent-paying jobs for all is a lie. There is more than enough money in the coffers of the corporations and their banks to provide decent jobs with good benefits for every worker in the world. The problem is the subordination of all economic decisions to the profit requirements of the wealthy elite.

To develop their struggle, workers must build new organizations, rank-and-file factory committees, independent of the pro-company unions. These committees must mobilize workers industry-wide and globally against the threat to jobs. This must be connected to a political program aimed at reorganizing economic life on the basis of a rational plan based on production for human need, not private profit.