A fire ripped through the Alpine Motel Apartments complex located in downtown Las Vegas, Nevada Saturday morning, leaving six residents dead, more than a dozen injured and displacing an additional 50. According to the City of Las Vegas Fire Department, it is the deadliest fire in Clark County since the 1980 MGM Grand Hotel and Casino fire that claimed 85 lives. Similar to that fire, a majority of the fatalities are due to smoke inhalation.

The fire is believed to have started at 4:00 a.m. Saturday morning in a first-floor apartment. At approximately 4:15 a.m., black smoke was billowing out of the wooden structure as the fire raced up to the second and third floors. By the time two fire ladders and dozens of police and emergency vehicles descended on the complex, located less than a mile from the popular tourist section of Las Vegas known as Fremont Street, dozens of residents were seen leaping out of their windows to avoid the flames and suffocating smoke. The blaze was reportedly extinguished by 4:30 a.m. 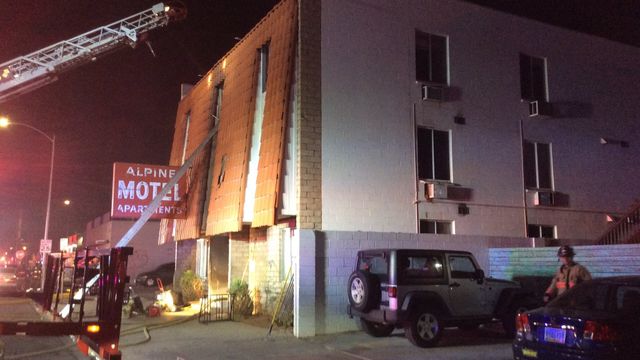 Residents have been barred from returning to retrieve any of their belongings due to the unsafe conditions and dangerous black soot that has filled the interior of the structure.

At the scene of the fire, three bodies were recovered inside the apartment where the fire is thought to have originated, while one person died at the hospital and another was found dead on the sidewalk. It is unclear as of this writing where the sixth dead body was discovered.

The three-story apartment building was built in 1972 and had been cited by city officials eight times between 2016 and 2018 for “code enforcement complaints” including complaints related to lack of fire safety equipment, according to city documents obtained by the Las Vegas Review-Journal. Despite multiple complaints, the Review-Journal could find no record of corrective action taken against the building’s management company by enforcement agencies or any local government body.

Malinda Maier, who identified herself as the co-owner of the property, told the paper she was “saddened by the loss of life, especially during a time when family and friends are gathered for the holiday.” Maier was “unsure” if the building had a sprinkler system but assured the paper that the building had a “fire escape” in the front and a “smoke detector” in every room. Adolfo Orozco, listed as the buildings registered agent and managing member as of September 30, has yet to make a public statement.

The origin of the fire, while still under investigation, seems to have been a stove that was used for warmth. Residents told fire investigators and reporters that the building had no working heating system. Survivors also confirmed that numerous complaints to management to repair the broken heating system went unheeded, forcing many to use their stoves as the only way to stay warm as temperatures dipped below 40 degrees Fahrenheit. Nevada state law mandates that landlords provide heat to their tenants.

In addition to no working heating system, residents also reported that the first-floor rear escape door was bolted shut from the outside. Floyd Guenther, 46, a survivor of the fire, told the Review-Journal that the door was purposefully bolted shut by management in order to “keep the homeless from sleeping in the complex.” Guethner stated that his smoke alarm did not work and that he frequently used his stove for warmth.

Other residents took to social media to confirm on-the-ground accounts. Twitter user SaraBoopyMonroe replied to the official Las Vegas Fire Department, “We were trapped with no alarms sounding and no way out because how this place was set up. Not even a sprinkler. The owner and manager have blood on their hands.” 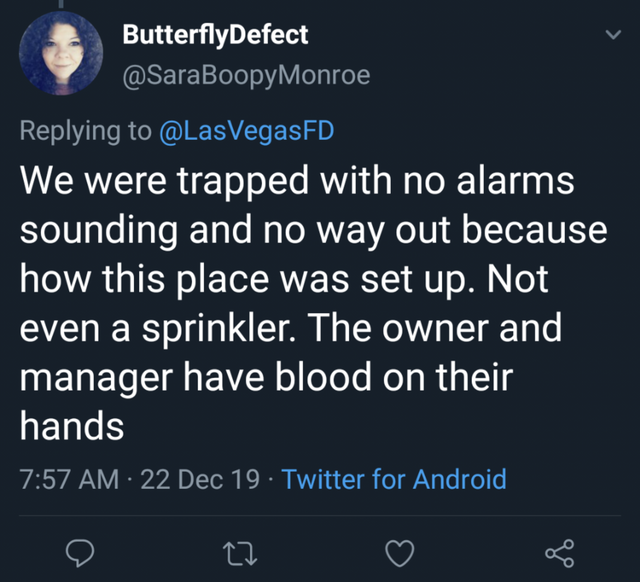 Another survivor, Jonathon Wilson, recalled to the Review-Journal his and his pregnant wife DeJay Wilson’s harrowing escape; after attempting to escape through the roof access, which was also locked and bolted from the outside, the couple was forced to make a rope out of their bed sheets and descend out their third-story apartment window.

Their escape nearly killed DeJay and their unborn child; as Jonathon was helping his wife descend out the window, her hands lost their grip on the slippery bed sheets and she plummeted nearly 17 feet down. Jon was able to make it down the rope and found his wife lying on her back unconscious. Jon quickly alerted medical personnel to his wife's emergency. According to Mr. Wilson, while his wife is “in a lot of pain,” recovering in the hospital with multiple broken bones and fractures, the fetus’s heartbeat remains strong.

Jimmy Lacy, Dayshena Thomas and her 7-year-old son, Andru Roach, were also forced to escape out their windows to avoid the smoke. As with other residents at the apartment, Lacy and Thomas were not awakened by a smoke or fire alarm; instead it was the persistent coughing from young Andru that alerted them to the danger. In their interview with the Review-Journal, Lacy and Thomas said that they had lost all of their possessions in the fire. Lacy and Thomas also confirmed that they had previously complained to management about the lack of heat as well as a broken refrigerator in their unit.

A maintenance worker, Don Bennett, is being credited as a hero for saving lives by running door to door and alerting residences of the danger. Anthony Meadows Jr., another resident and survivor of the fire, confirmed in interviews that Bennett “knocked on everybody’s door and shouted ‘Fire! Fire! Fire!” Bennett is believed to have sustained serious injuries or could possibly be one of the fatalites but as of this writing his current condition is still unconfirmed.

Residents were obligated to spend at least $700 per month in rent tn order to live in the Alpine Motel Apartments, a literal locked tinderbox. Despite paying this high price, tenants repeatedly reported that none of their concerns regarding building safety and maintenance were addressed leading up to the fire. Matthew Sykes, in an interview with the Associated Press, stated that the only alarms that sounded went off after he and his wife were in their smoke-filled hallway seeking a way out of the building.

This was the second fire Sykes has witnessed at the building since moving to Las Vegas from California. “I’m telling you, that place is totally not fit for anybody to live.” After the first fire nearly six months ago, Sykes told reporters that the fire department had warned the management company, Las Vegas Dragon Hotel LLC. Despite this warning from the department, no residents reported any fire alarms alerting them to the imminent danger, leaving Sykes and over 50 others displaced. “Now my wife and I, we need to find a place to live. We’re homeless for the time being.”

Due to the skyrocketing cost of rent and stagnant or decreasing wages following the 2008 recession, thousands of Californians and others from across the US decided to move to Las Vegas, which at that time had significantly more affordable housing prices. As was the case across the country, the “economic recovery” only benefited those responsible for causing the calamity in the first place, and as Wall Street and the banks stabilized off of the stolen wealth of millions of workers and the demand for rental housing began to rise, rent prices began to increase significantly. The average rent in Las Vegas is currently over $1,100 according to rentjungle.com

The influx of residents combined with a chronic low-income housing shortage has led to a booming pay-as-you-go housing economy in the city. With many unable to afford the necessary upfront money for security deposits, upfront rent, parking fees and any other usurious fees, older motels located off the popular Las Vegas Strip have turned to offering temporary housing for low-income residents. By charging slightly less than a typical management company, while providing minimum upkeep and allowing tenants to pay with a credit card, these criminal enterprises attempt to fill a “hole in the market” by turning significant profits from dilapidated and deadly housing.

Just as in the 2017 Grenfell Tower Fire in London, the fire at the Alpine Motel Apartments is a social murder. Decades of cost cutting and neglect, especially to older buildings, have transformed once habitable housing units into death traps. The ruling class has no answers to the social crisis of safe housing, only false sympathy and platitudes as parasitic landlords continue to drain what little money workers have left from their meager paychecks. The fight to guarantee high quality, safe housing for everyone requires workers and youth to fight for a socialist program to overturn the capitalist system and for-profit housing.