A fire early Christmas Day displaced more than 200 residents from a once opulent hotel in downtown Minneapolis, Minnesota. In a cruel irony, the building has served as temporary housing for people who were previously homeless, many of whom will struggle to find new shelter. The fire came a little more than a month after a blaze broke out on the 14th floor of the Cedar High Apartments, claiming five lives in the public housing high-rise.

Only minor injuries, and no fatalities, have been reported as a result of Wednesday’s fire at the Francis Drake Hotel. One person suffered smoke inhalation, and two others suffered minor injuries when they evacuated the burning building. Neither the Drake Hotel nor Cedar High were required to have sprinkler systems due to their date of construction and it is not clear whether this contributed to the severity of either blaze. 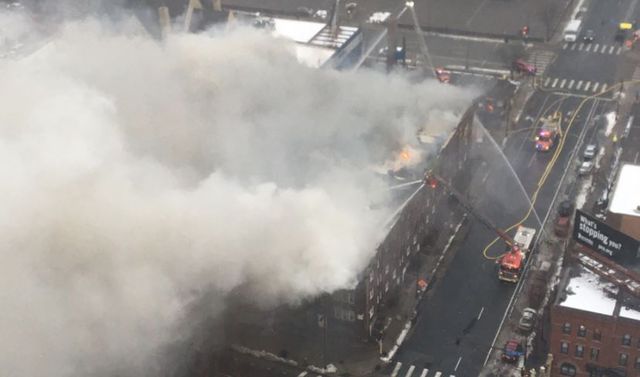 The Drake opened in 1926 as a luxury hotel catering to the rich. The structure has deteriorated since its glory days, with peeling paint and soiled carpets. The building is still under private management and rents out its rooms to Hennepin County for $30 per person a night for a room and three meals in a cafeteria-style dining room.

At the Drake, four hotel rooms caught fire around 3:30 a.m. local time on the second storey of the three-storey structure. Rescuers were searching the building soon thereafter; evacuation was nearly complete and the Minneapolis Fire Department reported that most of the blaze had been “knocked down.”

However, at about 3:50 a.m., rescue crews on the third floor reported that the fire had spread to the hotel’s attic and then to the third floor. Fire crews fully evacuated the building about 30 minutes later. By 5:16 a.m. the fire had been upgraded to four alarms. The blaze appeared to be under control by Thursday morning, but fire crews were expected to remain on the scene until the evening out of an abundance of caution. The cause of the fire is under investigation.

What transpired in the wake of the blaze is emblematic of the human response to such tragedies. Twin Cities’ residents turned out in droves to provide assistance to those displaced by the fire, many of whom escaped with just the clothing on their backs. Many lost Christmas gifts they had planned to share with their families. Vital documents such as birth certificates and driver’s licenses were presumed lost. Charred belongings were still being brought out of the building on Thursday.

There was such an outpouring of assistance in the form of diapers, socks, mittens, blankets and other essentials that city officials had to stop accepting these donations and urged people to donate cash instead. The Red Cross provided food and drinks and worked to make arrangements for victims to find a place to stay overnight. Metro Transit brought in buses to temporarily keep people warm.

Such demonstrations of compassion from neighbors and total strangers is common in the aftermath of tornadoes, hurricanes, wildfires and other tragedies. However sincere and heartfelt, however, they can provide only temporary relief to those suffering. Official government policy, particularly at the federal level, contributes to both the conditions leading to and lack of preparedness for such tragedies and a wanton disregard for the victims, who are left to fend for themselves and are soon forgotten.

The suffering of the victims of the Christmas Day fire in Minneapolis is a case in point. Local, state and federal officials are well aware of the US homelessness crisis. The US Department of Housing and Urban Development (HUD) has reported the third consecutive uptick in homelessness nationwide.

The January 2018 one-night tally by communities across the country counted 553,000 homeless people. This number has risen to about 568,000 homeless this year. About two-thirds of the homeless population were living in emergency shelters, transitional housing and other sheltered locations like the Francis Drake Hotel. Slightly more than a third were living on the streets, in abandoned buildings and other “unsheltered” locations.

However, the Trump administration has not responded by pouring needed funds into providing shelter for the homeless and the construction of affordable housing. Instead, it has cut funding for housing programs, strengthened work requirements for obtaining housing assistance, and appointed government officials who vilify the homeless and blame them for their own conditions.

Trump appointed multimillionaire Ben Carson to head HUD. Early in his tenure as HUD secretary, Carson famously stated in a radio interview that “poverty, to a large extent, is also a state of mind.” Carson—who grew up in poverty and went on to become an acclaimed neurosurgeon—argued that people with “the right mindset” can have everything taken away from them, but can still pull themselves up by their own bootstraps.

Blaming the poor for their own misfortune, he said, “You take somebody with the wrong mindset, you can give them everything in the world [and] they’ll work their way right back down to the bottom.” In line with this thinking, last year President Trump signed an executive order directing federal agencies to expand work requirements for people receiving food stamps, public housing benefits and welfare.

The logical step from blaming the homeless for their own misfortune is to criminalize them. CityLab reports that Trump is expected to sign an executive order to assign new federal resources to local police departments to remove homeless encampments and possibly strip housing funds from cities that choose to tolerate the encampments, such as Los Angeles and Portland, Oregon.

Earlier this month, HUD chief Carson met with local officials in Houston, visited an emergency shelter and was scheduled to tour a former Harris Court jail facility, according to those familiar with his agenda. Homeless advocates say the administration is looking at ways to turn former correctional facilities and federal buildings into shelters.

This approach is championed by Robert Marbut, the newly appointed head of the US Interagency Council on Homelessness. Marbut has pushed for shelters that erect barriers to treatment for those suffering from alcoholism and other additions. He has replaced Obama administration appointee Matthew Doherty, who subscribed to the Housing First approach, which advocates providing housing before tackling addiction and other behaviors.

Marbut has served as a consultant to numerous US states on homelessness, advocating policies such as banning people from sleeping on the streets and panhandling, and barring churches and other organizations from providing food to the homeless on the streets, which he dubs “street feeding”—a term more suggestive of rodents than humans.

At Haven for Hope, a shelter founded by Marbut in San Antonio, Texas, homeless people with substance-abuse problems must sleep outside in an exposed courtyard until they can pass a drug test. The roof-only structures provide little protection from the elements.

In another vindictive move, in May the Trump administration announced a plan to evict over 100,000 people, including 55,000 children, from subsidized apartments and government housing if their household includes even one undocumented immigrant. The new rule overrides a previous requirement whereby a family could acquire subsidies if at least one household member was a US citizen or permanent resident.

Trump has complained of the homeless that they are living in tents on “our best highways, our best streets, our best entrances to buildings ... where people in those buildings pay tremendous taxes, where they went to those locations because of the prestige.”

The victims of the Drake Hotel fire will take little comfort in such policies and statements from the occupant of the Oval Office. While donated food, clothing and other necessities have overwhelmed relief organizations due to the generosity of their neighbors, homeless advocates and local officials warn that it will be extremely difficult to find alternative housing under conditions in which local homeless shelters are already full.

In May, a group of top state, county and city officials issued a report to the Minnesota state legislature saying there was an immediate need for emergency shelter for about 300 to 600 additional people in the Twin Cities Metropolitan area.

The right to decent, affordable housing will not be defended by either big-business party. The Democratic Party’s impeachment of Trump was based solely on differences with the president over foreign policy issues, not on issues of burning importance to the working class—shelter, food, health care, education, the defense of immigrants and other basic social rights.

The right to decent housing for all can only be assured by placing the home-building and financial industry under public ownership and pouring hundreds of billions of dollars into the construction of new homes and the renovation of existing buildings for public use. This can only take place through the fight for a socialist housing program directed by a workers government.