The risk to life and property posed by the fires burning across large swathes of the Australian continent will increase over the coming days due to a combination of extreme heat, electrical storms and the over-stretching of largely volunteer emergency services.

In the state of Victoria, authorities issued evacuation warnings yesterday to residents and some 30,000 holiday makers in the entire East Gippsland district—an area, as the Guardian observed, half the size of Belgium. The southern island state of Tasmania is predicted to experience its hottest day in well over a century and possibly since records were taken. The state of South Australia will once again bake in heat wave temperatures well over 40 degrees Celsius (104 degrees Fahrenheit). 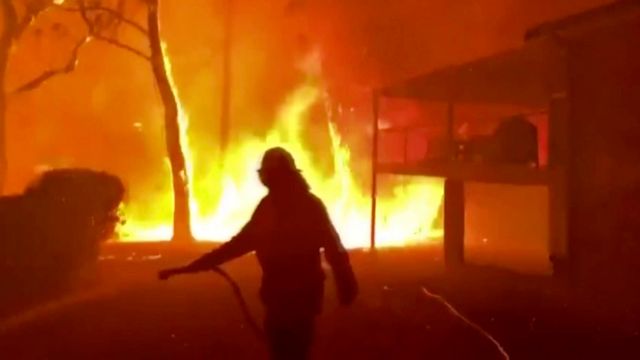 A firefighter sprays water on a fire moving closer to a home in Blackheath, New South Wales, Australia Sunday, Dec. 22, 2019 (Twitter@NSWRFS via AP)

Sydney, in the state of New South Wales, will also face temperatures over 40C. The city of five million is ringed by fires that have been burning, in some cases, since September. The internationally admired New Years’ Eve fireworks display over Sydney Harbour may yet be cancelled due to the heightened fire risk. In parts of the country, including the capital Canberra, music festivals and fireworks have already been called off.

The “fire emergency,” as it has been dubbed, has brought into stark relief the consequences of climate change caused by long-term carbon dioxide emissions from the burning of fossil fuels. For millions of working class people, especially younger people, the issue is no longer considered the subject of a legitimate debate. They not only want action to prepare for and respond to immediate challenges, they demand the long-term, worldwide changes needed to reduce the threat posed by global warming.

Global temperatures have increased by approximately one degree Celsius since the end of the 19th century, with the largest rise taking place since the mid-20th century. Climate scientists do not claim that global warming is the “cause” of weather events that dramatically impact the lives of millions of people—whether it be drought, fire, flood, snowstorms, wind, or hurricanes, typhoons and cyclones. They have insisted, however, that it is amplifying the scale, intensity and destructiveness of such events, and their warnings are being verified.

While the Australian continent has always been dry, hot and prone to fires, a fundamental shift in climate is taking place. As of 2018, nine of the 10 hottest years on record had occurred since 2005. This year continued the trend, with the hottest daily record being broken on December 16 and then broken again on December 17, with an average temperature across the country of 41.9 degrees Celsius (107.4 degrees Fahrenheit).

Rainfall averages have fallen in the southeast of the continent, where most people live, leading to more intense droughts and a longer fire season. In contrast, in the tropical north, rainfall averages have increased, leading to more intense monsoons. In just 12 days in January–February 2019, more than 2,000 millimetres of rain fell in parts of the northern state of Queensland, causing devastating flooding.

In the drought-affected areas of the continent, major blazes broke out from late August–early September, including in rainforests in southern Queensland and northern New South Wales where fire generally does not take hold. As the year draws to a close—and with the traditionally hottest and most dangerous summer months of the fire season still to come—well over three million hectares of forest have gone up in flames and over 1,000 homes destroyed. Sydney and other densely populated cities have been repeatedly blanketed with toxic smoke for days on end, with as yet unknown long-term health implications.

No region or nation-state on the planet is immune to the impact of climate change.

This month’s annual report by the organisation Christian Aid on “climate disasters,” for example, identified 15 events in 2019 that caused over $1 billion in damage. They include floods in South America, Australia, the US, Iran, China, North India and Spain; the windstorms, hurricanes and typhoons that tore across southern Africa, the Indian subcontinent, northern Europe, China, Japan, and the Caribbean and southeast US; and, in the closest parallel to the current situation in Australia, the wildfires that ravaged California.

Fire has also engulfed millions of hectares of forest in Siberia this year, as well as large areas of rain forest in the Amazon and Borneo.

The statistics published on the extent of ice melt in the Arctic and Antarctic are among the most alarming, due to the implications for sea level rise and the potential inundation of regions populated by hundreds of millions of people. Preliminary reports published in recent days by the University of Liege suggest that November–December 2019 has witnessed the largest ever recorded daily surface ice melts in Antarctica.

The challenges and threat posed by climate change will only become more acute over the coming years. Despite decades of warnings and endless promises to take action, the capitalist classes and their governments continue to preside over an ongoing increase in carbon emissions. If current trends are not checked, the consensus among scientists is that the planet will continue to warm rapidly and exponentially.

Scientific study has established what needs to be done to stem global warming to manageable levels. The use of fossil fuels as the main source for energy generation and transportation must be radically reduced, combined with reforestation and the large-scale deployment of artificial means of capturing carbon—promising examples of which are in advanced stages of testing.

The obstacles to carrying out what is necessary on a world scale are also identifiable. The chief one is the subordination of economic life to the accumulation of private profit for the capitalist class. The future of billions of people is literally being put at risk for the short-term profit interests of the financial and corporate oligarchy that owns and controls the productive forces.

The latest Bloomberg Billionaires Index estimates that the fortunes of the richest 500 individuals increased this year by a total of $1.2 trillion, a 25 percent rise over 2018. Their collective net worth now comes to $5.9 trillion. Much of this unearned wealth is derived, either directly or indirectly, from the 100 or so transnational energy conglomerates that are responsible for 70 percent of all greenhouse gas emissions and which have used their influence to hinder or outright block a transition to non-carbon forms of energy generation and transportation.

At the same time, the outmoded division of world into rival nation states has blocked the development of an international, scientifically based plan able to address the dangers of climate change. Each nation-state, and particularly the major powers led by the United States, has worked instead to protect the profitability of “its” corporations and wealthy elites at the expense of its rivals.

One of the clearest expressions of the irrationality of the capitalist nation-state system is the dedication of vast scientific resources and trillions of dollars to the preparations for war, while summit after summit on climate change ends in token measures, recriminations, handwringing and paralysis.

The social force that is capable of taking the control of the productive forces on a world scale out of the hands of the capitalist oligarchy and its political servants—before they drag humanity into the abyss—is the international working class. Through socialist planning and the reorganisation of economic life and a vast redistribution of wealth to meet human needs rather than private profit, the challenges posed by climate change can be met.