Echoing the lies of Indian Prime Minister Narendra Modi and other leaders of the Hindu supremacist Bharatiya Janata Party (BJP), the head of the Indian Army, General Bipin Rawat, has accused the opponents of the BJP’s anti-Muslim Citizenship Amendment Act or CAA of staging violent protests.

Speaking on Dec. 26, Rawat specifically targeted university students, claiming that they have incited “arson and violence.” 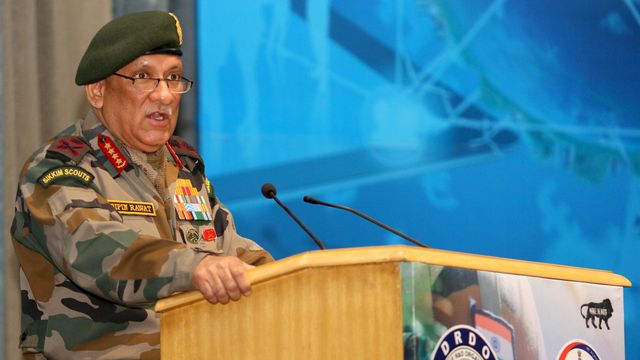 Students have led many of the protests that have convulsed India, since the BJP government rushed its discriminatory CAA through Parliament and into law earlier this month.

More than two dozen people have died in the protests, most at the hands of police in Uttar Pradesh, where the BJP state government has imposed a 15-day ban on all public gatherings of more than four people and encouraged security forces to run amuck.

Cynically promoted by the BJP as a “humanitarian” gesture, the CAA is the latest in a series of communal provocations aimed at asserting that India is a “Hindu nation,” in which the Muslim minority lives on sufferance.

The law provides a fast-track to Indian citizenship to all—except Muslims—who migrated, or whose ancestors migrated, to India from Afghanistan, Bangladesh, and Pakistan prior to 2015. Its passage underscores that the BJP’s plan for a National Register of Citizens, under which all of India’s 1.3 billion inhabitants will have to prove to the authorities’ satisfaction that they are citizens, is in reality a scheme for intimidating and harassing poor Muslims. This is because Muslims, and only Muslims, will now be under threat of being declared “stateless,” stripped of their citizenship rights, and made liable to detention and expulsion.

Opposition to the CAA has cut across communal, caste and ethnic-regional lines, stunning the entire political establishment with its intensity. Pushed onto the back-foot, the BJP government has responded with state violence and a smear campaign.

“Leaders,” declared the Indian Army chief, “are not those who lead people in inappropriate directions, as we are witnessing in a large number of university and college students, [and in] the way they are leading masses of crowds to carry out arson and violence in our cities and towns.”

Speaking the previous day, Modi had similarly smeared the anti-CAA protests as violent. India’s prime minister denounced “the way people protested and damaged public property after the enactment of the citizenship law,” and implored the populace “to respect police.” Speaking alongside Uttar Pradesh Chief Minister Yogi Adityanath, who is currently under criminal indictment for inciting violence against Muslims, Modi went on to advance a fascistic conception of citizenship. The people have rights, he conceded, but “rights have limits whereas responsibilities and duties [to the state] have a vast expanse.”

The opposition parties and even sections of India’s English-language corporate media are challenging the government’s attempt to label the anti-CAA agitation as violent.

Army Chief Rawat’s statements, in particular, have provoked much adverse comment as they represent a flagrant and all but unprecedented violation of the military top brass’ constitutional obligation to refrain from intervening in politics.

The Indian Express, in a sternly worded editorial, titled “Crossing a line,” said Rawat’s denunciations of the anti-CAA protests “were conspicuously improper” as they violated the democratic-constitutional “line” that the “armed forces are neither an extension or instrument of the ruling party, nor a dominant player in the polity.”

The Express correctly warned that Rawat’s statements “reinforce” the Modi government’s “attempts” to “criminalise the protests,” which, it added, “have been and … continue to be mostly spontaneous, mostly leaderless, and mostly peaceful.”

The Express editorial went on to chastise the government for “trying to mask” its “inability and failure” to engage in dialogue with the protesters, through “the police lathi charge and arbitrary detention, the suspension of internet and imposition of Section 144 [of the Criminal Code],” so as to ban all gatherings of more than four people.

The Indian Express’ criticism of Rawat and the BJP is all the more significant in that it, like most of the Indian media, has hitherto been largely supportive of the BJP government, viewing Modi as the best bet to push through further “pro-investor” measures and expand India’s anti-China military-strategic partnership with Washington.

But the extent of the opposition to the CAA, and fears that the BJP’s Hindu supremacist offensive will destabilize and delegitimize key state institutions are giving some sections of the ruling elite pause.

The Times of India has urged the BJP government to pull back, including in “constraining the space for peaceful protests” and its plans to rapidly move forward with the National Register of Citizens, and to instead concentrate on pushing through neoliberal “reform.”

In almost apocalyptic terms, a recent Times editorial warned of a “gathering storm” that “portends misery, chaos and economic ruin.” It then urged the Modi government to “pull back from this chasm, and focus the nation’s attention instead on what the IMF has billed as the surprising magnitude of India’s [economic] slowdown.”

Modi and his BJP government, however, are vowing to press ahead with implementing the CAA and a crackdown on “illegal migrants.”

Under conditions of mounting opposition and a faltering economy, they view the whipping up of Hindu communalism as necessary both to mobilize their base of fascistic Hindu supremacist activists against the working class, and to channel mounting social anger in a reactionary direction and pit India’s workers and toilers against each other on communal lines.

Under the Hindu cleric’s leadership, the UP government has used Section 144 to criminalize all public opposition to the CAA and justify lethal repression. To date at least 21 people have been killed in what is India’s most populous and one of its most impoverished states.

Both before and since sharing a platform with Modi in UP’s capital, Lucknow, Adityanath has made a series of inflammatory statements, inciting the police to go on a rampage. These include vowing security forces will take “revenge” on protesters for “causing any damage to public property,” and ordering the seizure of protesters’ property to “pay” for damages.

Last Friday, Adityanath posted a tweet that boasted “Every rioter…Every trouble maker is shocked” and has “fallen silent after seeing the strictness of the Yogi Adityanath government.”

Reports are now emerging in both the Indian and international press documenting the criminal actions perpetrated by the police at the urging of UP’s BJP state government. These include: killing four poor Muslim labourers, when police fired indiscriminately after chasing anti-CAA protesters into a poor Meerut neighbourhood; invading the homes of Muslims in multiple towns and cities, so as to terrorize them, threaten them with expulsion to Pakistan, and vandalize their property; and taking thousands, including prominent human rights activists, into preventive detention.

In what would be a further unmistakable authoritarian move, the BJP government is reportedly about to announce the elevation of Army Chief Rawat to the newly created post of Chief of Defence Staff (CDS).

On Saturday, the government made a change in the rules governing India’s military, so as to allow India’s first-ever CDS to serve until age 65. The change has been almost universally interpreted in the Indian media as paving the way for Rawat, who was set to retire on Dec. 31, to assume the new post, which is patterned after the chairman of the US Joint Chiefs of Staff.

Elevated by Modi to the post of Army Chief over several more senior officers, Rawat has been a strong advocate of the BJP government’s bellicose stance against Pakistan. With his comments last week on the anti-CAA protests, he signaled that as CDS he would be strongly supportive of the government’s increasing recourse to state violence, whether in Kashmir or now across wide swathes of the entire country.

The Congress Party, till recently the Indian bourgeoisie’s traditional party of government, their allies in the Stalinist parliamentary parties, and various ethno-regional parties including such erstwhile BJP allies as the Trinamool Congress Party in West Bengal and DMK in Tamil Nadu, are seeking to contain the opposition to the Modi government within the reactionary framework of Indian establishment politics.

In this, a particularly dangerous role is being played by the Communist Party of India (Marxist) or CPM and its sister Stalinist party, the Communist Party of India. For decades, the Stalinist parties and their respective union federations, the CITU and AITUC, have systematically suppressed the class struggle—supporting Congress-led governments that have spearheaded neoliberal reform and closer ties with Washington—all in the name of opposing the “Hindu fascist BJP” and defending secularism. In reality, the Congress, like the rest of the Indian establishment, has adapted to and connived with the Hindu right.

In India, as around the world, the fight for democratic rights and to defeat communalist and fascist reaction requires the independent political mobilization of the working class, in the fight for social equality and against the putrefying capitalist social order.