A machete-wielding attacker wounded five people attending a Hanukkah celebration on Saturday evening in the Rockland County, New York, hamlet of Monsey, located in the town of Ramapo, 30 miles north of New York City. The attack took place as Hasidic worshipers gathered in the home of their rabbi, Chaim Rottenberg, located next to their synagogue. The perpetrator reportedly entered the residence and began randomly attacking the celebrants, who had gathered on the seventh night of the annual Hannukah observance. 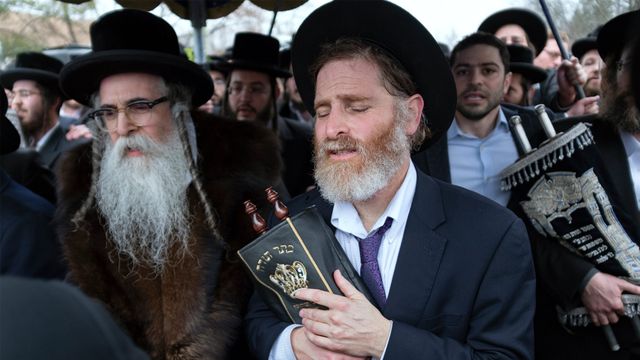 Community members, celebrate the arrival of a new Torah a day after, a knife-wielding man stormed into the home and stabbed multiple people as they celebrated Hanukkah in the Orthodox Jewish community. (Credit: AP Photo/Craig Ruttle)

More injuries and even fatalities might have occurred if some of those assembled had not fought back and forced the attacker to retreat. The perpetrator also attempted to enter the synagogue, but worshipers there had locked the door. He then fled the scene.

One of those injured was the rabbi’s son. As of the last report, two victims remained hospitalized, one in critical condition with a skull fracture.

Some hours later, according to news reports, a suspect was taken into custody in New York City’s Harlem neighborhood, his vehicle having been tracked based on its license plate number. He was subsequently returned to Rockland County.

There are contradictory statements regarding whether the man, 37-year-old Grafton Thomas, who is African-American, has a prior criminal record. Thomas is a resident of Greenwood Lake, New York, in adjacent Orange County. In a court appearance Sunday morning he pleaded not guilty to five counts of attempted murder and one count of burglary.

The attack follows a number of other recent assaults against Jews in the New York area, including the deadly attack earlier in December on a kosher supermarket in Jersey City, New Jersey, just across the Hudson River from Lower Manhattan. Three people were killed in that attack, two of them ultra-Orthodox Jews.

Other recent incidents include the stabbing of an Orthodox Jewish man in Monsey and the stabbing of another in Brooklyn last month. The Jersey City attackers, also African-American, are said to have been linked at one time to the Black Hebrew Israelite movement, which has been labeled a hate group by the Southern Poverty Law Center.

These and other attacks are clearly anti-Semitic in nature. While more remains to be discovered about the motives behind the latest incident, the suspect clearly targeted both the rabbi’s home and the synagogue. He is reported to have screamed at one of intended victims, “I’ll get you.”

The Saturday night attack takes place within the context of increasing racial and ethnic tensions being whipped up by all sections of the ruling class. While Donald Trump poses as a foe of anti-Semitism, he seeks to whip up fascistic forces, including the Nazis who paraded their hatred of Jews in Charlottseville, Virginia, two years ago, and whom the president later said included “good people.” White House advisor Stephen Miller’s ties to xenophobic and fascistic elements were recently documented. The Trump administration’s open racism is part of a worldwide shift by capitalist ruling elites toward authoritarian rule and the promotion of far-right forces.

Trump openly bases his appeal to fascistic forces on attacks on socialism. For their part, the Democrats and major mainstream media outlets like the New York Times employ identity, and especially racial, politics in an effort to counter the growth of anti-capitalist and socialist sentiments and undermine the spread of strikes and social protests by dividing the working class.

The role of racialist politics cannot be discounted in recent incidents that have pitted African-Americans against Jews, particularly in the New York area.

President Donald Trump tweeted Sunday that “The anti-Semitic attack in Monsey, New York, on the 7th night of Hanukkah last night is horrific.” Trump carried the predominantly ultra-Orthodox district by more than 90 percent in the 2016 presidential election.

In a statement on the Monsey attack, New York Governor Andrew Cuomo said it was the 13th anti-Semitic incident in New York in the past few weeks. He declared it an act of “domestic terrorism.”

Beyond that, he offered nothing but empty platitudes. It was, he said, “inexplicable, no warning, nothing said, just hate, just hate and violence. That’s all it was.”

Social and racial tensions in Rockland County predate Saturday’s attack. The ultra-Orthodox and Hasidic population in the county has grown rapidly in recent years, to the point where it presently constitutes nearly one-third of the residents. The shift has taken place, at least in part, because of the increasing cost of housing in the New York City boroughs of Brooklyn and Queens, which have long been home to large Orthodox Jewish communities.

The influx has raised tensions between the new arrivals and the prior residents. One focus of controversy has been the funding of the public schools. The non-Jewish population of Ramapo includes a significant number of African-American, Haitian and South American residents, as well as non-Orthodox Jews. Some have accused the ultra-Orthodox Jewish majority on the local school board of shortchanging the public schools, while their own children are sent to private schools. Evidence indicates, however, that most of the public schools’ financial difficulties stem from severe budget cuts and other restraints that have nothing to do with ethnic/religious rivalries.

The Democratic administrations of Cuomo and his predecessor David Paterson cut tens of millions of dollars in funding to local school districts following the 2008 financial crisis. This was compounded by Cuomo’s imposition of a 2 percent annual cap on property tax increases, which provide a significant portion of school budgets. Right-wing elements have used anger over the deteriorating conditions in the public schools to whip up racial and religious antagonisms.