Republican Representative Matthew Shea of the Washington state legislature is now the subject of an investigation due to public allegations of past involvement in far-right political violence. Shea is just one of many state and federal personnel whose ties to fascistic and racist groups have been exposed, though he is the first sitting legislator to face investigation for far-right violent activities.

The Washington State House of Representatives commissioned a full report by the private investigation firm Rampart Group to discover whether Shea “engaged in, planned, or promoted political violence.”

Matt Shea has served in the lower house of the state legislature since 2009, representing Washington’s 4th legislative district, that encompasses a large part of the central rural region. While the investigation takes place, the House Republican leadership suspended Shea from his committee positions in the House, including the Environment and Energy Committee, though his expulsion as a representative cannot take place until the legislature is in session.

The Rampart report notes: “Investigators have obtained evidence that Representative Shea, as a leader of the Patriot Movement, planned, engaged in, and promoted a total of three armed conflicts of political violence against the United States Government in three states outside the State of Washington over a three-year period to include 2014, 2015, and 2016.” 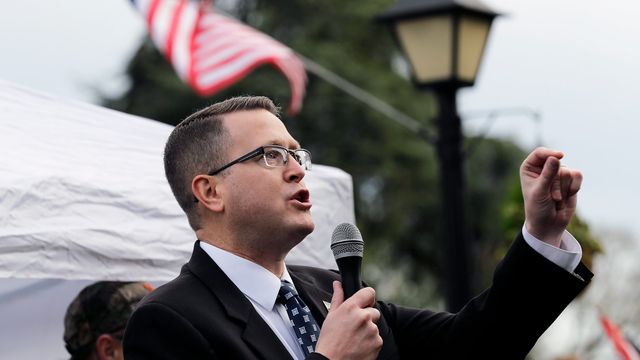 The Patriot Movement includes a collection of ultra-right militia groups, which generally advocate extreme anti-government views, fantasize conspiracies of “globalists” to take away the rights of small property owners, open the United States to invasion by non-white immigrants, and replace the American Constitution with Muslim Sharia Law. The Southern Poverty Law Center identified 623 active patriot groups in 2016, 165 of which were armed militia groups.

In 2014, Shea mobilized Patriot Movement members to take part in an armed occupation of a federal government facility in Bunkerville, Nevada that lasted 41 days. The standoff between federal and militia troops centered on the longstanding attempts of cattle rancher Cliven Bundy to utilize land owned by the federal government. Shea’s calls for support on the Liberty For All III% (3 Percenters) website reportedly helped to generate a turnout of 1,500 armed militia members from different groups within the Patriot Movement, such as the Oath Keepers.

The report of investigation also indicates that in 2015, Matt Shea again called upon Patriot Movement followers to join him in an armed conflict with the Veteran’s Administration in Priest River, Idaho, to defend a veteran’s right to own firearms after he was determined unfit to purchase them by medical professionals. Shea allegedly participated in the armed conflict.

In 2016, Shea had participated in an “act of domestic terrorism” during the infamous armed standoff of federal troops against the Bundy clan and militia group supporters, after the latter occupied the Malheur National Wildlife Refuge in Oregon.

Representative Shea also admitted to writing a Christian neo-fascist document that was publicly released in 2018, titled “Biblical Basis for War,” which is referenced in the investigation report. The document lists 14 categories with bullet points that outline religious justifications and rules for militia-based war. According to Shea, war can be carried out to end tyranny, abortions, same-sex marriage, occultism and communism. The methods of assassination, armed resistance, and guerrilla war are justified so long as they serve the interests of God and the end of government tyranny.

In response to the investigation, Shea wrote on his Facebook page, “Like we are seeing with our President this is a sham investigation meant to silence those of us who stand up against attempts to disarm and destroy our great country. I will not back down, I will not give in, I will not resign. Stand strong fellow Patriots.”

He ended his appeal to patriot group supporters by saying, “I will continue to defend the constitution against tyranny and fight to protect our God given unalienable rights to life, liberty, property, and the ability to defend the same.”

The revelations about Shea’s actions come after numerous police officers and military personnel have been similarly exposed in the past year, indicating the growth of fascist elements within the state.

Two men, Dalton Woodward and Trent East, who actively served in the Army National Guard, were recently kicked out after an Army investigation confirmed their membership in a neo-pagan fascistic hate group called Asatru Folk Assembly.

Less than two weeks ago, the US Army’s XVIII Airborne Corp posted a sympathetic tribute on Facebook to a Nazi war criminal named Joachim Peiper, to commemorate the 75th anniversary of the Battle of the Bulge in World War II.

In October, US Coast Guard Lieutenant Christopher Paul Hasson pleaded guilty to charges of unlawfully possessing firearms after an investigation into his stockpiling of 15 weapons and over 1,000 rounds of ammunition for use in planned acts of terrorism against Democratic Party politicians, journalists, and other “cultural Marxists.” Hasson was an active “white nationalists” who frequently browsed far-right websites on his computer at work.

In May, the World Socialist Web Site publicized a report by Unicorn Riot and Huffington Post that exposed members of the US military involved with the neo-Nazi group Identity Evropa, providing insight into how these far-right elements are recruited and cultivated within the armed forces. This report was quickly followed by another which identified hundredsofpoliceofficers who were engaged with fascistic and racist groups on social media.

Until recently, ultra-right, white supremacist and neo-fascist groups were kept on the fringes of the Republican Party, for the most part denied direct participation in the affairs of state. Under Trump, they have been promoted and encouraged and, as the case of Representative Shea demonstrates, given direct access to political office.

With his threats of civil war against political opponents and his constant praise of police and military violence, Trump is deliberately whipping up fascistic elements and creating the conditions for their mobilization, both against his political enemies within the ruling elite and, more broadly, against the working class.