Kolkata, the capital of the east Indian state of West Bengal, witnessed large protest rallies over the past week against the anti-Muslim citizenship law. The Citizenship Amendment Act (CAA), which is aimed at creating a Hindu communal state or Hindu Rashtra, was rammed through the national parliament by the Hindu supremacist Bharatiya Janata Party (BJP) and its allies in early December. 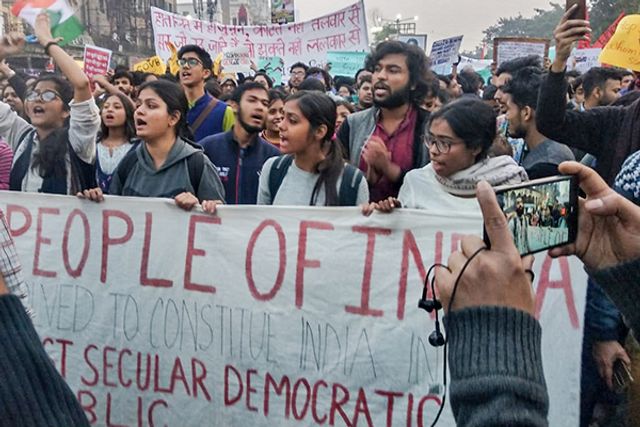 The CAA determines citizenship in India on religious basis for the first time since formal independence in 1947. It will grant citizenship for non-Muslims from three Muslim countries in South Asia—Pakistan, Bangladesh and Afghanistan—who or whose ancestors have arrived in India before 2015. However, that opportunity will be denied to all Muslim immigrants from South Asia and also anyone from other countries in the region.

The anti-Muslim communalist character of the CAA is being implemented alongside the extension of the reactionary National Register of Citizens (NRC) throughout the country, as announced by Home Minister Amit Shah, the right-hand man of Prime Minister Narendra Modi. Under the NRC, all 1.3 billion Indian citizens must provide documentary proof of their citizenship to the satisfaction of government authorities. Those who fail to do so will be declared “non-citizens” and face the threat of detention and eventual expulsion.

WSWS reporters attended an anti-CAA protest rally held in Kolkata on December 21 and distributed WSWS articles in English, Hindi and Bengali. Several thousand people, including students, intellectuals, and professionals and workers, took part in the rally. Our correspondents talked to participants and discussed the vital political issues raised by the Modi government’s communalist measures. 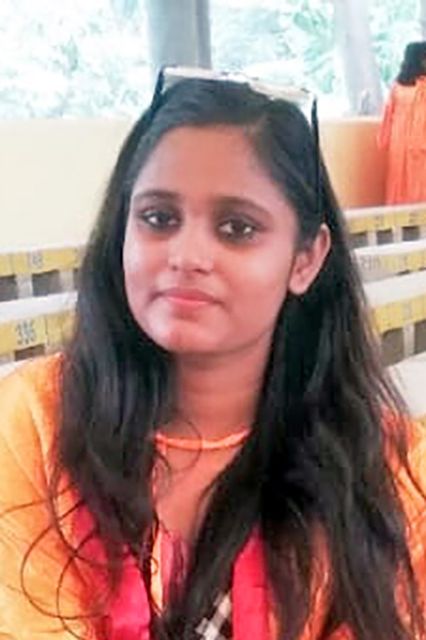 Sumita Shaw, a student from Jadavpur University, said: “The CAA which tends to provide citizenship for persecuted Hindus, Sikhs, Buddhists, Jains and Christians from selected neighbouring countries is clearly an attempt on the part of the government to push its manifesto of ‘Hindu Rashtra.’ This act is disguised in the name of ‘compassion and brotherhood,’ but on deeper examination is intended to exclude Muslims from Indian citizenship or to reduce them to a status of second-class citizens later by implementing the NRC nationwide.

“This CAA has altered the constitutional citizenship act of 1955 and made religion the basis of its [the BJP’s] vote bank politics for the coming state elections. It has already started working on its plan by sparking off communal hatred and shutting down the internet in different places so as to block dissenting voices.

“The economy is in deep crisis and this government always has this tendency to keep generating new issues so that people get entangled in the new one and forget the old one. We can’t afford to let this strategy grasp us again and again. We can’t accept the saffronisation of the Indian democracy [Hindu communalism]. The communal divide has to be uprooted.” 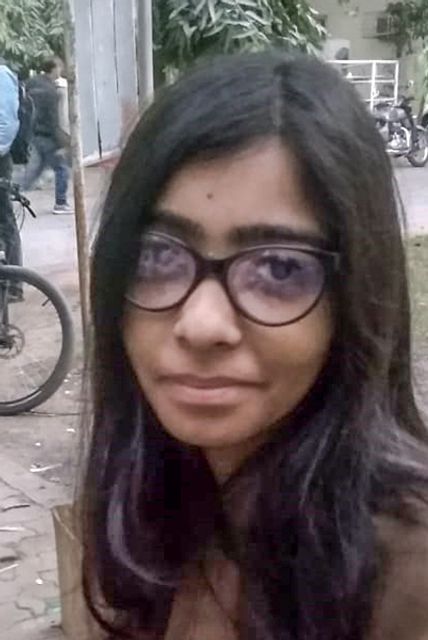 Tina Dutta, a student from the same university, said: “The world is a global village. So I don’t think we need borders. I condemn discrimination of every sort. World is one—we all bleed red. We all have the same skin. Humanity is the only religion. Love and kindness, these are everything we need right now. Spread love not hate. Spread kindness. Let us all unite and become one.”

Harende, an engineering student, commented on the general atmosphere: “Everybody is feeling insecure. There is growing apprehension regarding their fate. They are not sure of what is going to happen next. The people could not see whole picture. The political situation in the country is heading towards fascism.

“I was not concerned about politics two years ago. However, as I began to realise the scary social impact of the political situation, I have begun to pay attention to the developing political events.

“Home Minister Amit Shah claims the UN human rights resolution is not applicable to India. This talk by a minister is clearly posing risks to basic democratic and human rights. Those in power don’t want to listen to the voice of the people.

“The ruling elite is suppressing human rights and the peace of mind of the majority of people. Before coming to power, Modi boasted about generating millions of new jobs. This demagogy was used to rally the support of the youth and people for BJP’s electoral victory. Nevertheless, after Modi came to power, we didn’t witness job generation but instead job destruction.” 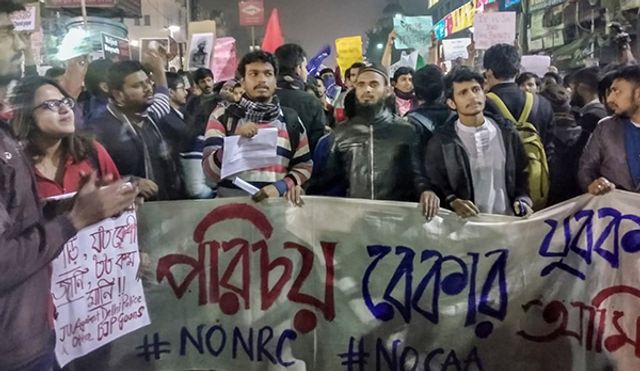 A section of the protest in Kolkata

Priyanjali Paul, a clinical psychologist, said: “Unity in diversity! That’s the first thing I learnt about my country, my India. We are unique, because we are diverse in nature. And our constitution has made it possible to live together despite so much of diversity. Today, that constitution is in danger. And as citizens of India, it’s our duty to safeguard it.

“What is a government? It’s of the people, for the people and by the people. The current government has completely changed the meaning of governance in a democracy. They are trying to change the basic structure of the constitution by repeatedly attacking secularism, the right for freedom and dignity of people, and the right for information.

“We want answers. And yes you [the government] are bound to give answers because you have power because of us. We, the citizens of India have elected you. So, yes you have to answer. Where is the data of the unemployment rate? Or the data of the farmer suicide rate in the last two years? Or the data on the effect of demonetization? And many more?

“To distract us from these issues, now they have brought the NRC and CAA, which are not only discriminatory but also impractical. Their spokespersons are not even clear about the Act. They can’t answer half the questions asked about them.

“I am a clinical psychologist, and I have had clients from the interior parts of this country (both Hindus and Muslims). These people (who make up 70 percent of the population) don’t even know what they will eat tomorrow or where they will live next year. How can you possibly expect them to have all documents securely kept [to prove their citizenship]?

“India is already statistically the most depressed country in the world. Now such steps by the government have only created anxiety and panic. Do they even care about people’s mental health? However, amidst all this negativity, I am happy to see my country fighting back. I am happy to see people on the streets, despite such oppression.

“This is my India. This is what democracy stands for. And no matter what they say, despite your religion, caste and economic status, all of you who are fighting for safeguarding our constitution are true nationalists!”

M. Kaji, a small shop owner in Kolkata, said: “On a day-to-day basis people are struggling to eke out their life. Most the working people are experiencing great hardship. There is unemployment, the economy is in very bad condition, and the GDP is declining. What we see is that social problems have intensified under BJP rule. They have not solved any of the basic issues people are facing. Instead they have brought a more brutal law—the CAA. This will bring a lot of pressure on ordinary people, particularly Muslims, and will divide the poor people.

“But I see it’s not just a problem for Muslims. If somebody thinks like that it means they don’t understand the situation. It will affect Hindus too. Look at Assam and what’s happened there! Out of the 1.9 million people who have been taken off the NRC list in Assam, the majority are Hindus!

“I have not been interested in politics before. But now I feel I can’t be silent anymore. It’s the BJP, particularly Modi-Amit Shah duo and their brutal inhuman policy that has forced me to stand up and protest against it.”

She commented on the discriminatory nature of the documentary requirements under the NRC: “How will poor people show their papers? For instance, in many places almost every year floods take place and entire belongings are swept away by the floods. Then what is there to show the officials?

“It is outrageous what the authorities are now saying. For a long time, they insisted one should have as a proof of identity, the Indian Voter Identity card or Aadhaar card [a card with a 12-digit individual identification number issued by authorities]. Then why are they now demanding something else as proof?

“You know how much time and energy we have spent to get these cards. Now they came out with another thing, the NPR [National Population Register]. Even though Modi government and its ministers are saying that the NPR is nothing to do with the NRC, that’s not a true. They are trying to fool us. But this time they can’t do it. They are also aware of the fact that this time people are not going to take it easily. We have no other way but to oppose this discriminatory CAA- NRC-NPR.”