On December 15, International Rights Advocates (IRA) filed a case in US district court in Washington, D.C. against Apple, Alphabet (the parent company of Google and YouTube), Dell, Microsoft and Tesla on behalf of the families of 14 Congolese child miners. 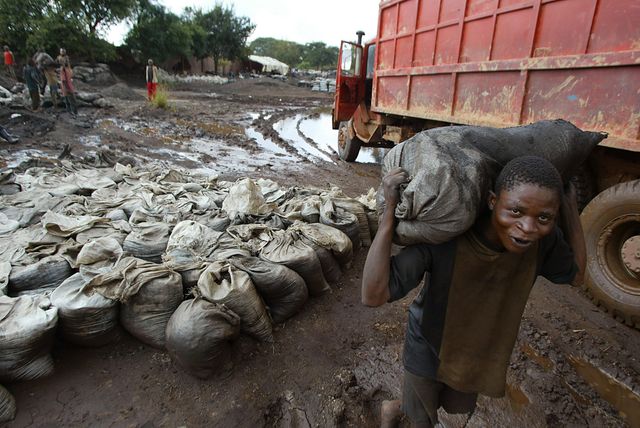 A worker carries wet Cobalt on his back at the Shinkolobwe Cobalt mine in the DRC (AP Photo / Schalk van Zuydam, File)

Of the fourteen, six have died, while eight suffer from life-altering injuries including crushed legs and full body paralysis. According to IRA, the case has been put forward on behalf of children “as young as six years old” and they note that “some child miners are trafficked.” The plaintiffs accuse these companies of deliberately purchasing cobalt that was produced by child labor in the Democratic Republic of the Congo (DRC) under horrific working conditions.

The case charges: “Defendants Apple, Alphabet, Dell, Microsoft, and Tesla are knowingly benefiting from and providing substantial support to this ‘artisanal’ mining system in the DRC. Defendants know and have known for a significant period the reality that DRC’s cobalt mining sector is dependent upon children.”

These companies buy cobalt, a rare earth metal essential for the batteries used in cellphones and electric vehicles, from mining companies, including the Chinese-owned Huayou Cobalt, Anglo-Swiss Glencore and the Belgian based Umicore, all of whom are accused of actively engaging in illegal mining activity.

Responding to the lawsuit, Apple has claimed that to their knowledge, their supply chain does not involve child labor. It is clear this ignorance was feigned.

Most children in the case worked for Dongfang Mining Congo, a satellite of Huayou, which is Apple’s main supplier of cobalt. Following an investigation led by the Washington Post in September 2016, Huayou’s president admitted that the use of child labor was “our short-coming.” In response to the same exposé, a Tesla spokesperson declared they were going to “send one of our guys over there.” When the Post followed-up six months later, the company admitted no one had been sent.

Despite Apple’s claim to have suspended the purchase of cobalt from Huayou in 2017, in the company’s Supplier Responsibility 2018 Smelter and Refiner List, it continues to list “Zhejiang Huayou Cobalt Co., Ltd.” as a supplier of DRC cobalt and claims to have conducted a “third party audit.” The nature and results of this audit are unclear, and any claims to have ended child labor are contradicted by the plaintiff’s own research from 2017 to 2019 in Huayou-owned mines.

In the interim, multiple media sources have continued to report on conditions in cobalt mines. In 2016, Amnesty International released a report entitled, “This Is What We Die For – Human Rights Abuses in the Democratic Republic of Congo Power the Global Trade in Cobalt.”

On August 5, 2017, the Mail on Sunday featured a report on cobalt mining entitled “Child miners aged four living a hell on Earth so YOU can drive an electric car.” On October 12, 2018, the Guardian published an article on the industry called, “Is your phone tainted by the misery of the 35,000 children in Congo’s mines?”

Following a further three years of hollow promises of investigations from all defendants to investigate these issues since the report, the IRA states, “The fact that these programs were announced is merely evidence that the companies know they have serious child labor and forced labor problems in their DRC supply chains for cobalt.”

Approximately two-thirds of the global supply of cobalt is mined in the “copper belt” region of Haut-Katanga and Lualaba Provinces of the DRC, which include the cobalt mining areas of Kolwezi, Fungurume, Likasi, Kambove, Kipushi, and Lubumbashi. Ninety percent of cobalt mined in the Congo is taken to China where it is mostly used in the production of lithium-ion batteries.

A typical smartphone lithium-ion battery might contain five to ten grams of refined cobalt and a single electric-car battery can contain up to 15,000 grams. The growth of these industries has been reflected in the increased demand for cobalt. In the past five years, demand has increased threefold and it is expected to double again by the end of 2020.

According to the same 2016 report from the Post, “artisanal” mining is carried out by adults and children known locally as ‘creuseurs’ (diggers). This is a euphemism to describe independent miners, often children, without regulations or safety equipment who then sell on their hauls to suppliers such as Dongfang. A day’s yield of cobalt ore typically fetches two dollars.

For children, this sum is even lower. Siddharth Kara, who is serving as an expert witness on the case, estimates from 303 recorded cases that the average day’s pay for children under 14 is $0.81. Given the uncertain nature of this work, it is not uncommon for creuseurs to go home empty handed. Out of 100,000 cobalt miners, 40,000 are estimated to be children.

The 2016 Post report described how creuseurs dig wherever one finds a locally known green leaved flower that is supposedly the marker of cobalt deposits; this regularly leads to the construction of long tunnels, little wider than a human body, under roads and buildings without any supports. These can easily collapse on miners. Other creuseurs enter both abandoned and used mines under the cover of darkness often leading to clashes with armed security guards, police and militia.

Cobalt mining also causes considerable environmental damage in the southern DRC. Since uranium is common in the mines of this area, radioactive ore with little cobalt content is dumped in local rivers. According to DownToEarth.org in 2015, following a dump of 19 tons of radioactive material, the local authorities again warned residents of Likasi (a city of 300,000) to keep a safe distance from the Mura river and not to use its water.

A 2012 report by the University of Lubumbashi charted the effects of this pollution. In recent years, there has been an unprecedented increase in birth defects in mining regions. These included cases of Mermaid Syndrome and holoprosencephaly. These conditions were previously unknown in Congo and have all occurred in children of miners. This is only an extension of the already severe and wide-ranging health problems that occur in mining populations in the Congo and internationally.

Responding to the findings of IRA’s research team the lead counsel in the lawsuit, Terry Collinswood, stated “I’ve never seen such extreme abuse of innocent children on a large scale. This astounding cruelty and greed need to stop.”

Threats to life are numerous. One of the children represented had his leg crushed when a chamber roof collapsed on 40 people on July 2, 2019. Thirty-eight died. Another in the case lost his leg when he collided with a mining truck while driving 80 kilograms of ore on a small motorbike. When two brothers were caught by a collapsing wall in an open pit-mine, one died and the other severely damaged a leg.

Many of the children are forced to work because of the widespread poverty in the region. In other cases, representatives of the mining companies—who according to the plaintiffs are regularly accompanied by Congolese Presidential Guards—simply round up children and force them into the mines.

The plaintiffs claim these individuals are employees of Huayou, Glencore and Umicore. Many of the mines are also controlled by local militias that work directly with these companies, and to whom the government turns a blind eye.

Horrific working conditions are hardly limited to ‘artisanal’ cobalt mining in mineral rich DRC. In June 2019 43 miners died in a landslide in a Glencore-owned copper mine; in October and December two gold-mine incidents killed 22 and 24 miners respectively. While large incidents often make their way to national and international media, individual and smaller group deaths are a daily occurrence across the Congolese mining industry.

The IRA’s case concludes that companies will continue these practices “until they are forced to do better.” However, human rights abuses undertaken in the pursuit of profit cannot be fought on a purely legal basis. Appealing to the courts distracts from the fact that such abuses are an integral part of the global capitalist system dominated by American and European Imperialism. Any attempt at limited legal reform that infringes on the right of billionaires to continue to reap gargantuan profits will necessarily fail.

The fact that elections at the end of 2018 marked the first peaceful transition of power in the DRC since 1965 should not fool anyone into thinking that a new dawn awaits the Congolese people.

The supposedly ‘democratic’ victory of Félix Tshisekedi was not a product of a political revolution against the Kabila dynasty—father and son Laurent-Désiré Kabila and Joseph Kabila ruled over the country from 1997 to 2019—but instead represented a compromise between the two factions of the ruling class in which Tshisekedi ascended to the presidency on the condition that a Kabila ally was appointed prime minister. As the WSWS reported on January 17, 2019, a data leak revealed widespread voter fraud, leading the African Union and European Commission to deny the validity of the result.

The Congolese government remains as much at the behest of American high-tech companies and their suppliers in the cobalt processing industry as it was under the US-backed dictatorship of Mubutu in 1965-97 and that of the Kabilas.

Government forces provide armed support to the personnel of its foreign investors while they work impoverished and desperate Congolese men, women and children to death.

Ending the exploitation of child labor, which is rampant in ex-colonial nations across the globe, can only be achieved through the overthrow of the capitalist system and the expropriation of the technology giants and mining conglomerates by the working class on a global scale and their reorganization to meet the needs of all of humanity.