In the wake of US President Donald Trump’s illegal drone murder of top Iranian General Qassem Suleimani on Thursday, millions of people took to social media to express their opposition to the growing threat of a third world war.

Google Searches for “World War 3” and “conscription” spiked within hours of the airstrike. Google Trends continues to record “Iran” as the second most searched term in the United States, with more than 500,000 searches for the topic.

On Friday, hundreds of thousands of people concerned about the reinstatement of the draft flooded the official website of the Selective Service System, which maintains a list of Americans eligible for the draft. The staggering level of traffic led to the temporary shutdown of the site.

The incident prompted the mainstream media to run a series of articles reassuring people that the draft was ended in 1973 during the Vietnam War. Some of the articles also falsely noted that the US Congress would likely not reinstate it because of overwhelming opposition from the public. Only 15 percent of American adults support the return of the draft.

Since news reports of the drone attack broke, trending hashtags on Twitter have included #WWIII, #WorldWar3, #WW3memes, #NoWarWithIran, #NoWarOnIran, #IranAttack, #TrumpSwore, and #FranzFerdinand. The latter refers to the parallels drawn between Trump’s drone strike of Suleimani with the Serbian assassination of Austro-Hungarian Archduke Franz Ferdinand that sparked World War I.

Many Twitter users grappled with the idea of being sent to a war through memes, images and videos, some with comedic captions. Some of the posts have received as many as tens of thousands of “likes” and “shares.”

One user, @salmaanoooo, joked about their dreams being shattered by the prospect of a third world war: “Me: This decade I'm gonna get married, have kids, buy my first car, travel the worl-#WWIII:” followed by a gif, saying, “I’m not going to let you get the chance.”

@EDuksie wrote “WWIII gone be like…” with a short edited video of a man jumping out of a plane and dropping a massive bomb on a city that appears to be London, obliterating it. 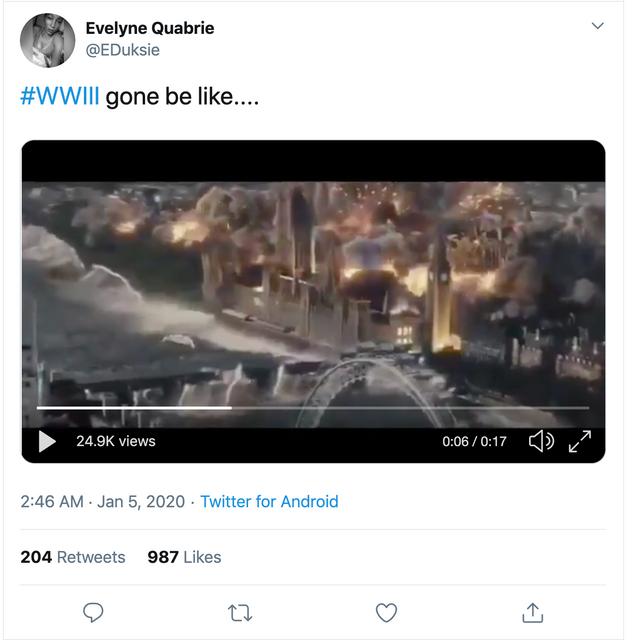 Tweet by @EDuksie showing the devastating impact WWIII would cause

Another user, @6bigdaniel6, posted a photo of hundreds of people’s “bitmojis,” or emoticons that can be designed to look like the user, concentrated in Iran on a location-based Snapchat map.

Many of the darkly humored posts portrayed different ways users would try to avoid a draft, such as fleeing the country or faking illnesses and injuries.

“Tryna decide where’s the best place to hide when WWIII starts,” wrote @Rocky_6, a young man from Ireland, posting this caption to a short video of a man pointing to different countries on a world map. Another user, @PlayoffNugs, shared a video with the caption “Me meeting my homies in prison after we all refused the draft for WWIII.” @PlayoffNugs shared a video expressing opposition to a draft

Notably, the antiwar sentiment has come from social media users around the world. Users from the United States, United Kingdom, France, Brazil, Uruguay, South Korea, Russia, Turkey and countries across the Middle East have spoken out in opposition to the impending war, often supportively engaging in each other’s posts. In some cases, Americans were speaking directly to Iraqi and Iranian people to solidarize themselves with the fight against war.

A user from Iraq, @mahmoudkenny98, posted on Twitter saying, “FIGHT YOUR WARS AWAY FROM US!! YOU MADE MY COUNTRY A BATTLEFIELD FOR YOUR OWN WARS THAT WE HAVE NOTHING TO DO WITH!! I NEVER LIVED A DAY IN MY LIFE WITHOUT BEING IN A WAR.”

One user, @DudesterThe, responded saying, “When I heard about the Baghdad airport strike, my immediate first thought was about you, my friend.” They continued, “We, the People, did not want this.” Another user, @aquaponicdave, responded, “Unfortunately our oligarchs want your oil. We will defeat them from both directions.”

One young person’s post from Hingoli, India, read, “Please maintain the peace in world and say no to #WWIII.” While he only had 34 people following him, his post received over 2,000 likes and more than 500 retweets.

A similar tweet received an even larger response. “World is already burning, we don’t want any more war. #Iranattack #WWIII,” wrote @tnawazkhan, with an illustration depicting the horrific fires raging across Australia right now. The post has received 14,500 likes so far and nearly 5,000 retweets.

The eruption of anti-war sentiment on social media from workers and youth around the world is a powerful demonstration of the revolutionary implications of modern technology and its potential to unify the working class on a global basis.

There is clearly no shortage of determination in the working class to fight against the drive to World War III. The critical question, however, is one of political perspective. The WSWS fights to arm the growing antiwar sentiment with a strategy that unifies the struggles of the working class in a worldwide movement for socialism.

The World Socialist Web Site encourages all workers and youth who want to fight against war to follow us on Facebook, Twitter, and Instagram, join our movement, and take up the fight for socialism.