Anyone believing that the German Greens have yet to provide sufficient evidence to demonstrate that Green parties offer no alternative to the right-wing political establishment only needs to turn to their co-thinkers in neighbouring Austria for further proof. In the new government, which will be sworn into office this week, the Greens have seamlessly filled the shoes of the far-right Austrian Freedom Party (FPÖ), securing a majority for inhumane, pro-corporate, and law-and-order policies.

Sebastian Kurz of the conservative Austrian People’s Party (ÖVP), the former and incoming Chancellor, “managed to perform a minor miracle a few days after Christmas,” commented the news channel NTV. “He will lead his ÖVP into a government coalition with the Greens–without giving up his right-wing course.” 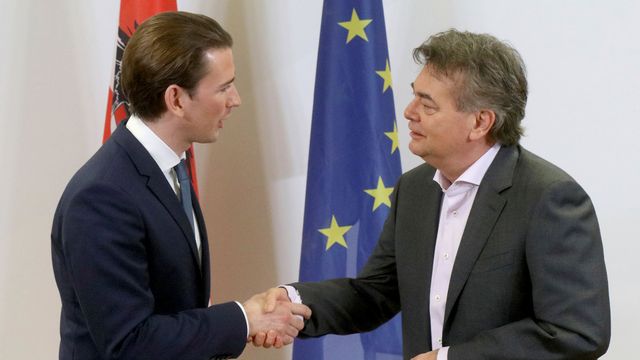 The 326-page coalition agreement presented by Kurz and Green leader Werner Kogler to the public last Thursday continues in the areas of economic policy, taxation, refugee policy, internal security, military rearmament, and social spending cutbacks the agenda of the far-right ÖVP/FPÖ coalition that fell apart last May amidst a filthy corruption scandal.

What Kurz described as the “unification of the best from both worlds” and “proof that you can protect the environment while protecting our borders,” turns out on closer inspection to be a classic declaration of war on the working class, refugees, and the most vulnerable sections of society with a handful of cosmetic Green flourishes.

In exchange for the extremely vague commitment that Austria will be a net zero carbon emitter by 2040, the Greens have agreed to the racist policies that they were publicly condemning during the election campaign, including a “decisive struggle against illegal immigration and political Islam,” a ban on headscarves in schools, and preventive detention for so-called threats.

All major ministries, including Finance, the Interior, Foreign Affairs, Defence, and Integration, will be controlled by the conservatives. The Greens, which will lead four of the 14 ministries, were bought off with a so-called super ministry for climate change, the environment, transportation, infrastructure, energy, and innovation. However, the Greens’ room for manoeuvre will be extremely limited given the tax cuts and strict budgetary policies to which they have agreed.

Several media outlets have praised the conservative/Green alliance as a model for the whole of Europe, and Germany in particular. This is by no means coincidental, since it marks the shift of privileged layers of the urban middle class which once considered themselves to be left-wing and progressive into the camp of political reaction in the face of the resurgence of the class struggle worldwide.

ÖVP leader Kurz made clear from the outset of the three-month-long negotiations that the strict, inhumane refugee policy would not be altered. The government programme describes the policy of distributing refugees within the European Union (EU) as a “failure,” and states that Austria will not propose any initiative on the issue. People rescued at sea should be brought to third countries or sent back to their countries of origin by personnel from the EU border protection agency Frontex. The construction of a system of camps in the countries of origin should also be considered, the programme adds.

At the same time, the government will significantly strengthen the apparatus of state repression. The Federal Office for the Protection of the Constitution and Combatting Terrorism (BVT), which already unifies the powers of the intelligence agencies and police under one agency, will be expanded further. Moving forward, it will publish annual reports on extremism.

While the Greens claim this will help to improve the surveillance of right-wing extremist groups, it will be directed above all against left-wing organisations and movements. By strengthening the BVT, the government is granting more power to an agency that has been infiltrated over recent years by far-right forces and implicated in a series of scandals.

The police will also be significantly strengthened. A planned “personnel offensive” will result in the recruitment of 2,300 new officers and the creation of 2,000 trainee positions. The use of drones by the police is to be made standard procedure.

The incoming government will also go further than its predecessor in terms of online surveillance and gathering private data. Under the control of the Interior Ministry, so-called “cyber cops” will work together within a “state cyber security centre.” After the Federal Constitutional Court blocked the comprehensive use of spy software, the ÖVP and Greens also declared their intention to continue working on the implementation of an all-embracing surveillance system.

Right-wing extremist organisations that are expanding their networks and, like the Austrian Identitarians, maintain ties with far-right terrorists, such as the Christchurch gunman, will remain largely untouched. Instead, the government plans to intensify the fight against “political Islam” by creating an information-gathering centre for that purpose. Cultural associations accused by the authorities of spreading terrorist propaganda will be able to be shut down. This proposal, like many others, has been lifted straight from the programme of the far-right FPÖ.

The establishment of “preventive detention,” which can be imposed without the existence of sufficient evidence or a court decision, was a demand raised by the FPÖ that the Greens criticised until recently. The last time such a system of detention existed in Austria was under the regimes of Austro-fascism and the Nazis.

By strengthening the mechanisms of domestic repression, the ÖVP-Greens government is preparing to combat the eruption of major class battles. The central focus of both parties’ programmes is the interests of the corporate elite. The planned income and business tax cuts are gifts to the super-rich and big business, just like the cutting of corporation tax and the increase to the tax-free limit for profits made from private wealth.

Der Standard pointed out that the tax cuts, including their minor details, correspond to those agreed by the ÖVP and FPÖ. Those with high incomes will benefit from the tax cuts, while low wage earners will notice little difference. According to Statistics Austria, low-wage earners amount to one quarter of employees, excluding the self-employed.

The corporate tax will be reduced from its current rate of 25 percent to 21 percent. In contrast, the inheritance and capital transfer taxes on large sums of wealth demanded by the Greens in their election programme are nowhere to be found in the coalition agreement. To make the country more attractive to speculators, the government is also aiming for a balanced budget, an upper limit to state debt of 60 percent of GDP, and the cutting of capital gains tax during its first term in office.

Additionally, the attack on pensions will be intensified. Following the German model, the framework for the rollout of a private pension provision will be established. At the same time, the state pension will be cut.

The government’s personnel embodies its right-wing programme. The 33-year-old Kurz headed the government from December 2017 to May 2019, first in a coalition with the Social Democrats, then with the far-right FPÖ, and now with the Greens. Within the conservative ÖVP, he has enforced a hard-right line.

The same applies to the future Vice Chancellor and Green leader Werner Kogler. In the 1980s, he was a founding member of the Alternative List Graz, a collection of environmental, pacifist, and left groups. Among others, this included the Pabloite Group of Revolutionary Marxists (GRM).

Like the vast majority of this milieu, Kogler underwent a rapid rightward evolution in the Green Party and helped pave the way for the party to join the government. Their positions in opposition to militarism, for social justice, and in support of refugees and immigrants were jettisoned in the process.

The Finance Ministry and Interior Ministry will be led by experienced ÖVP politicians deemed to be hardliners in their areas of expertise. Gernot Blümel and Karl Nehhammer have announced that they will continue the line of the ÖVP-FPÖ government. Future Foreign Minister Alexander Schallenberg, a career diplomat, was already a member of the transitional government that served over recent months. Schallenberg, who is not a member of any party, is considered the “eminence grise of foreign policy,” has close ties with all of the parties, and is a close confidante of Kurz.

The Interior Ministry will be led by Susanne Raab (ÖVP), who has made a name for herself over recent years as a hardliner. The jurist was responsible, together with the FPÖ, for the burka ban and an anti-Islam law. Her nomination has been interpreted as sending a message to the far-right that the policies of the ÖVP-FPÖ government will be continued.

The Defence Minister will be Klaudia Tanner, former director of the Lower Austrian Farmers Alliance, who has no experience on defence issues. Like all of the other ÖVP ministers, she is a loyal ally of Kurz and will ensure a substantial strengthening of the armed forces, both in terms of personnel and equipment.

For the Greens, Leonore Gewessler will assume control of the expanded Environment Ministry. As director of the Global 2000 NGO and an environmental activist, she previously organised campaigns against free trade and the building of a third runway at Vienna airport. Vice Chancellor Kogler will also head the Ministry of Sport and Public Servants.

Alma Zadic, whom Kogler won over from the Pilz List, a split-off from the Greens, will head the Justice Ministry. The party of the ex-Pabloite Peter Pilz has moved far to the right and advocates anti-Muslim positions. While on the BVT parliamentary committee, Zadic assisted in the cover-up of the intelligence agencies’ activities.

The Ministry of Social Affairs and health will be led by the former primary school teacher Rudolf Anschober, who previously served in the ÖVP/Green state government in Upper Austria, where he enforced sweeping cuts.