Washington’s targeted killing of Iranian Gen. Qassem Suleimani has evoked opposition and horror within the European population. This criminal act of state terrorism threatens to plunge the Middle East into yet another bloodbath—one that could drag the entire world into a nuclear inferno. Trump issues new threats on a daily basis, which, like the threat to destroy Iranian cultural sites, are war crimes both under international and American law.

But the European governments have issued no criticism of the criminal actions of their alliance partner, which increasingly resemble those of Adolf Hitler on the eve of World War II. While these governments have called for de-escalation, they have refused to condemn as a war crime the targeted killing of a high-ranking representative of a sovereign country. Instead, they have directed their fire on Iran. Although they view Trump’s action as a tactical mistake, they are preparing to support the United States in the event of war. 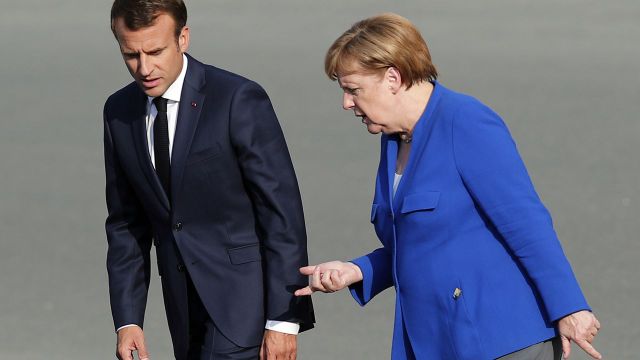 “We have condemned the recent attacks on coalition forces in Iraq and are gravely concerned by the negative role Iran has played in the region, including through the IRGC and the al-Quds force under the command of General Suleimani,” states the opening paragraph.

This is followed by an appeal for de-escalation: “We call on all parties to exercise utmost restraint and responsibility. The current cycle of violence in Iraq must be stopped.”

But the murder of Suleimani, which amounts to a declaration of war by the United States on Iran, a country with a population as large as Germany’s, is not even mentioned, let alone condemned. Instead, the statement continues: “We specifically call on Iran to refrain from further violent action or proliferation, and urge Iran to reverse all measures inconsistent with the JCPOA [Joint Comprehensive Plan of Action—the 2015 nuclear accord with Iran which the US unilaterally abandoned in 2018].”

Johnson rushed to assure Trump by telephone that Suleimani was “a threat to all our interests,” adding that “we will not lament his death.”

Macron telephoned Trump the same day and promised his “full solidarity with our ally in light of the attacks carried out over recent months against coalition interests in Iraq,” according to an official statement released by the Élysée Palace.

Macron “expressed his concern about the destabilising activities of the al-Quds Force under the authority of General Qassem Suleimani and recalled the necessity for Iran to end them immediately and refrain from any military escalation that could deepen instability in the region.” He also “stressed France’s determination to cooperate with its regional and international partners towards an easing of tensions.”

The German government issued similar statements. In the Bild am Sonntag newspaper, Foreign Minister Heiko Maas accused the murdered Suleimani of “having left a trail of blood and devastation throughout the Middle East.” He added, “The EU had good reason to have him on its terrorist list.”

Iran responded by summoning the German ambassador and complained of “untrue, inappropriate and destructive statements,” as well as support for Washington’s “terrorist attack.”

While Berlin, Paris and London justify US state terrorism, they seek to influence the course of events in their own interests. Macron telephoned the Iraqi president to assure him of France’s support for Iraq’s “security and sovereignty.” He also consulted with the rulers of a number of Arab states and the Russian president. German Chancellor Merkel will fly to Moscow this Saturday to meet with Vladimir Putin for discussions on the situation in the Middle East.

The European governments’ ambivalent response is motivated by two factors.

First, they fear that an uncontrolled escalation of war between the United States and Iran would result in another disaster, which would hit Europe hard in the form of terrorist attacks, an increased flow of refugees, higher oil prices and political instability.

This concern was formulated most clearly by the former first lord of the British Navy, Lord West, in an interview with the Daily Mail. “Britain and America want the same outcome in Iran,” he told the tabloid. “We both seek the removal of a hardline regime that poses a grave threat to global security, and its replacement with a more moderate government.”

He went on to say that Britain is trying “to ease tensions with Iran… for as long as the Iranian people feel themselves under constant siege by the rest of the world, there is no hope for a more rational and civilised government taking over in Tehran.” By contrast, Trump’s strategy is “to use harsh sanctions and ruthless military force.”

He continued: “However clinical its air strikes and drone attacks, America cannot defeat Iran and implement full-scale regime change. That would require at least a million pairs of boots on the ground, which would mean a return to conscription—last seen during the Vietnam War—and the likely loss of hundreds or thousands of American lives.”

Trump will not be prepared to carry this out ahead of the elections in November, he went on. “Instead, tensions will mount further. The world will teeter on the brink of war, not for days, but perhaps for months or even years.”

Lord West’s interview concludes with the demand for a large rearmament programme for Britain so as to enable London to more aggressively assert its interests in the Middle East.

The second factor driving the response of the European governments is the mounting class tensions within their own countries. In 2003, millions of people in Europe and around the world took to the streets to protest against the impending Iraq war. No small role in this was played by the French and German governments’ opposition to the war and their public criticisms of US President George W. Bush.

The European governments want to avoid a similar mobilisation today at all costs. They fear that the widespread opposition to war could unite with the mass struggles against pension cuts in France and the seething opposition to job cuts and poverty in Britain and Germany.

Like the US government, they are responding to the social tensions, economic problems and international conflicts by strengthening the apparatus of domestic state repression, rearming for war and plunging into military adventures. This is why they defend Trump’s war crime and why they are preparing to participate in a conflict they know will lead to disaster.

This is being rapidly reflected in the media. Symptomatic were two pieces in the German daily Süddeutsche Zeitung.

On January 4, Stefan Kornelius justified the Suleimani assassination in a piece titled “Declaration of war,” while at the same time noting that “the reasons that may have driven Trump to give his order to kill... do not add up to a plausible strategy.” Trump is now “master of the battlefield, but he lacks a strategy and the understanding.”

A comment two days later by Thomas Avenarius in the same newspaper already struck a different tone. In a piece titled “The US should resume its role as a peacekeeping power,” he wrote, “Criticism of the US role in the Middle East is warranted more often than not… But it could be different this time around with the killing of General Suleimani: in the best case scenario, the US will resume its role as the peacekeeping power. Because the Middle East is sinking into utter chaos.”