Tens, if not hundreds, of millions of workers and youth will participate in tomorrow’s India-wide one-day general strike.

In the intervening three months, the BJP government has accelerated it class war offensive, turn to authoritarian methods of rule, promotion of Hindu supremacism and integration of India into Washington’s military-strategic offensive against China. 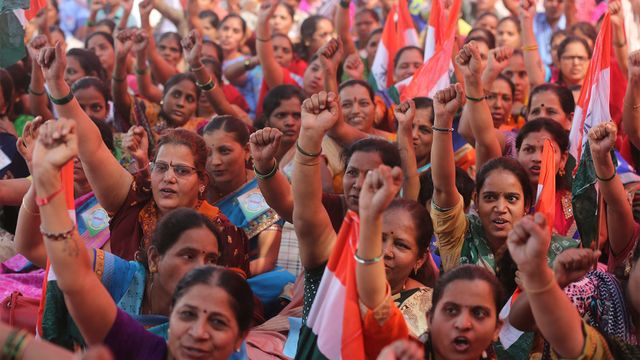 The BJP government has tabled legislation to “streamline” and “modernize” India’s labour laws into four new labour codes. Among other changes, these would empower companies to employ workers on fire-at-will contracts, place new restrictions on the right to strike and establish workplace organizations and gut India’s already woefully lax and inadequate system of factory inspections.

The Modi government is responding to a mounting clamour from global capital and domestic big business for it to do more to boost India’s competitiveness, i.e. investor profits, amid a pronounced slowdown of the country’s economy. Consumer demand, industrial production, and exports are all faltering. According to the Centre of Monitoring the Indian Economy, there were 73 million jobless in India in December and the jobless rate of 7.7 percent was close to a 45-year high.

Ten central labour federations and various independent unions, which together represent large sections of workers, from coal miners and port workers to bank employees, will participate in Wednesday’s strike. Politically, however, the one-day protest strike is being led by the Centre of Indian Trade Unions (CITU) and the All India Trades Union Congress (AITUC), the labour affiliates of the twin Stalinist parliamentary parties, the Communist Party of India (Marxist) or CPM and the Communist Party of India (CPI).

For decades, the Stalinists have functioned as a critical part of the Indian political establishment, whose special function is to contain, defuse and suppress working class opposition. This includes, in the name of thwarting the Hindu supremacist BJP, supporting a succession of right-wing big business governments from 1989 to 2008. Today, under conditions where the bourgeoisie is demonstrably breaking with democratic-constitutional forms of rule, the Stalinists are seeking to shackle the working class to the putrefying parties and institutions of the Indian state.

Even while they denounce the Modi government as “fascist,” the Stalinists insist that it can be pressured into dropping its “anti-worker, anti-people and anti-national policies” by working in tandem with the right-wing opposition parties and their various labour fronts, such as the Indian National Trades Union Congress (INTUC) and the DMK-aligned Labour Progressive Federation.

The INTUC is the trade union wing of the Congress Party, which until recently was the Indian ruling elite’s principal party of national government. Congress spearheaded both the Indian bourgeoisie’s post-1991 drive to make India a cheap-labor haven for global capital and its forging of a “global strategic partnership” with US imperialism.

Late last month, the unions added to a long list of socio-economic demands a call for the BJP government to rescind its anti-Muslim Citizenship Amendment Act (CAA). Rushed through parliament and into law in just four days last month, the CAA makes religion a criterion for determining citizenship, for the first-time ever in independent India. Moreover, it is meant to pave the way for an all-India National Register of Citizens (NRC) whose transparent purpose will be to harass and intimidate the Muslim minority in the name of identifying and expelling “illegal migrants.”

Since the CAA came into law on December 12, India has been convulsed by the biggest wave of mass protests in decades. Often mounted in defiance of brutal police repression, these protests have touched all parts of the country and cut across the communal, caste and ethnic divisions that India’s venal ruling elite has systematically cultivated with the aim of dividing the working class.

The sudden eruption of mass opposition has shaken the BJP national and state governments. They have responded with lethal repression, internet and cell phone shut-offs, blanket bans of all public gatherings of more than four people under the notorious British colonial-authored Section 144 of India’s Criminal Code and by further stoking communalism.

The outburst of popular opposition to the CAA, itself only the latest in the long series of BJP government provocations against India’s Muslim minority, will undoubtedly swell the participation in Wednesday’s general strike, helping draw in students and sections of the rural and urban poor. Organizations of peasants and agricultural workers associated with the twin Stalinist parliamentary parties have called for a “Grameen Bandh” or rural strike on Wednesday.

As more perceptive Indian commentators have recognized, anger over mass joblessness, under-employment and contract jobs, endemic poverty, and India’s transformation into one of the worlds’ most socially unequal societies, have contributed to the breadth and tenacity of the anti-CAA movement.

Recent months have seen a wave of workers’ struggles. These include a massive one-day strike last September by hundreds of thousands of coal miners protesting the government’s privatization plans, and a 52-day strike by 48,000 Telangana State Road Transport Corporation (TSRTC) workers against the plans of the Telangana Rashtra Samithi state government to sell-off much or all of the intra-city bus service.

The TSRTC workers courageously defied police repression and government threats to fire them en masse. But, as has happened time and again over the past three decades, the unions, with the Stalinists’ support, isolated the TSRTC workers’ struggle, while encouraging them to make futile appeals to the courts, opposition parties and even the Modi government to intervene on their behalf (see: Telangana Road Transport workers face harassment, contract-rollbacks after union surrender).

There have also been strikes and protests against job cuts, especially in India’s globally-connected auto industry. Hundreds of thousands of autoworkers have been laid off or had their contracts terminated in recent months.

Since early November, thousands of workers laid off from Honda Motorcycle and Scooter’s Manesar, Haryana plant have been protesting outside the plant, forcing the company to temporarily halt production. On December 1, thousands of workers from across the Manesar-Gurgaon industrial belt, which lies on the outskirts of Indian’s capital, Delhi, joined a demonstration protesting the government-promoted proliferation of poorly-paid, precarious contract labour jobs.

The president of the Bellsonica Auto Component India Employees Union, Jasbir Singh, told the Newsclick website that contract workers have borne the brunt of the employers’ drive to make workers pay for a sharp downturn in sales. “In the Gurgaon-Manesar region well over 2.5 lakh (250,000) workers have been laid off … The ones not laid off are facing major cuts in wages.”

Wednesday’s strike will undoubtedly provide an occasion for tens of millions of workers and youth to voice their opposition to the Modi government and will, albeit only in a limited way, attest to the enormous social power of the working class.

However for the Stalinist CPM and CPI and their union apparatuses the strike is political theatre. Over the past quarter century, they have called 19 one or two-day general strikes, while working as the left-flank of the capitalist establishment—much of that time, including today, in open alliance with the Congress Party.

Significantly, the unions’ demands make no mention of India’s military-strategic alliance with US imperialism, nor voice any opposition to the India’s bourgeoisie’s vast military build-up, and bellicose drive to establish itself as the regional hegemon. The unions do, however, decry the government’s moves to privatize parts of the defence sector as “a betrayal of national interests.”

Also, conspicuously absent from the unions’ list of demands is any call for the freedom of the 13 Maruti Suzuki workers who have been jailed for life on frame-up murder charges for having led militant opposition to a brutal work regime and contract labour jobs. The Stalinist parties and the CITU and AITUC have callously abandoned the Maruti Suzuki workers because they fear their militant example and because the exposure of the role of the police, courts, and Congress Party in the workers’ frame-up would disrupt their own cozy relations with the political establishment and big business.

Underscoring, the orientation of the CITU, AITUC, and all the unions, their top officials rushed to meet BJP Labour Minister Santosh Gangwar last week when he invited them for a meeting. Later they lamented that this representative of the ultra right-wing BJP government wasn’t interested in serious dialogue. A key union demand is that the government reinstitute annual meetings of the tripartite Indian Labour Conference, which has not met since 2015.