The United Venezuelan Socialist Party (PSUV) of president Nicolás Maduro and its coalition installed a new speaker of the National Assembly on Sunday to replace Juan Guaidó, the US-sponsored activist who used his position as speaker to proclaim himself “interim president” last January in an attempt to oust Maduro. 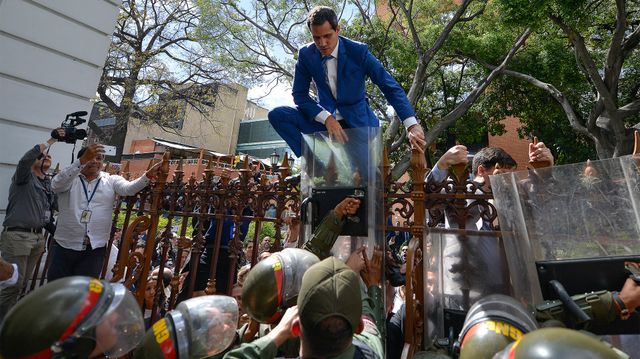 Juan Guaido climbs the fence in a failed attempt to enter the compound of the Assembly, as he is blocked from entering a session to elect new Assembly leadership in Caracas, Venezuela, Sunday, Jan. 5, 2020 (AP Photo/Matias Delacroix)

A former member of the pro-Guaidó opposition, Luis Parra was hand-picked by the PSUV officials and sworn in as speaker without a quorum. Outside, the National Guard kept Guaidó and his backers from entering the building during the scheduled vote.

After clashes between the national guardsmen and Guaidó’s associates and bodyguards, the pro-Guaidó entourage traveled a few miles east and convened a parallel session in the headquarters of the newspaper El Nacional, where 100 legislators, according to the opposition, voted to re-elect Guaidó as speaker.

The anti-Maduro opposition had obtained 112 of the 167 seats in 2015, but several minority opposition parties representing about a tenth of the legislature split from the Guaidó camp in September and several other opposition legislators have switched since.

US Secretary of State Mike Pompeo congratulated Guaidó for the supposed re-election in a statement Sunday that said the swearing-in of Parra was “farcical” and was the result of “bribery and intimidation.” Spokespeople for the European Union, as well as Canadian and several Latin American governments followed suit, recognizing Guaidó as the “re-elected” head of the National Assembly and “interim” government.

Maduro, on the other hand, recognized Parra, claimed that Guaidó and his supporters were late to the voting session on Sunday, and applauded a “rebellion of the opposition deputies.” He added: “I tell Pompeo and [US special envoy to Venezuela Elliott] Abrams: how will you explain to Trump that you lost the elections in the National Assembly? Another failure of the gringos in Venezuela.”

The Venezuelan Foreign Minister, Jorge Arreaza, denounced the “vulgar interventionism” of US officials. “They should worry about the disaster they seek to provoke with new wars for oil,” he said, referring to Trump’s effective declaration of war against Iran.

While media commentators have noted that Maduro’s calculations are based on recent splits and corruption scandals in the opposition, the statements from Caracas demonstrate that they are seeking to exploit the war crisis in the Middle East and growing popular opposition to the lawlessness of US foreign policy.

Amid simmering popular anger in Venezuela and internationally toward the US-backed coup in Bolivia, the assassination of the Iranian general Suleimani and the continued devastation of the Venezuelan economy by US sanctions, whatever words of concern from US officials about democracy, “bribery and intimidation,” ring as hollow as ever.

As established in Trump’s National Security Strategy, Washington is pursuing “great-power conflicts” to undermine its main rivals, Russia and China—the main allies of the Maduro government.

As it pursues its operations in Eurasia, US imperialism’s involvement in the Bolivian coup and US threats against Venezuela highlight the importance placed by US strategists in consolidating its stranglehold over Latin America, including its energy and mineral wealth. The danger that Latin America will be dragged into a global conflagration has only mounted.

Last month, while reiterating that “all options are on the table,” Pompeo made a threat that has acquired a greater meaning after the killing of Suleimani: “In July of 1989, Nicolae Ceausescu said capitalism would come to Romania when apples grew on poplar trees—and by December he was hanging from a rope. The end will come for Maduro as well. We just don’t know what day.”

If anything, the sidelining of Guaidó only increases the likelihood of a US military invasion or reckless covert operation with incalculable consequences, particularly after Guaidó’s call for a military uprising in April, supposedly to allow USAID trucks to enter the country, shipwrecked.

At the same time, the bourgeois Venezuelan government is hostile to mobilizing the working masses in Venezuela against imperialism. Caracas has depended on a fragile balance between appeals for accommodation with the Trump administration and anti-democratic maneuvers to undermine the pro-US opposition while partnering with former coup supporters and double dealers. This can only embolden the Pentagon and CIA.

Parra himself was expelled as recently as December 1 from the right-wing Justice First party, which belongs to the pro-Guaidó coalition Broad Front Free Venezuela (FAVL). The expulsion was part of a damage control operation after a document signed by Parra and eight other FAVL legislators was leaked calling for an end to a corruption inquiry charging businessman Carlos Lizcano, ostensibly in exchange for kickbacks.

The scandal erupted a week after Guaidó dismissed his diplomatic representative in Colombia for airing documents from the Colombian government showing that money intended for the few Venezuelan soldiers that have deserted was squandered by Guaidó’s envoys on “prostitutes, alcohol and other abuses.”

Prior to Sunday’s events, Elliott Abrams had claimed that Maduro had bribed several opposition legislators with up to $500,000. On Sunday, the pro-Guaidó legislator Delsa Solórzano, who has backed US sanctions and whose political alliance has received millions of dollars from the State Department, went further and declared hypocritically that “each of those dollars is tainted with the blood of our children dying in the hospitals.”

As Parra and Guaidó both convoke legislative sessions scheduled for today, workers and youth must oppose any efforts to chain them to any faction of the ruling class. The only way to resist US efforts to install a puppet regime that would brutally crush all opposition is the political mobilization of the Venezuelan working class in opposition to the Maduro government and the entire ruling apparatus under a socialist and internationalist program.