Earthquake strikes Puerto Rico, killing one and knocking out power to the island

On Tuesday morning, a 6.4 magnitude earthquake and several other strong tremors struck the island of Puerto Rico, causing hundreds of buildings to collapse, severely damaging many others and knocking out power across the US territory. So far at least one fatality and several other injuries have been attributed to the major tremor.

Tuesday’s quake was among numerous seismic events along an underwater fault line in recent days including a 5.8 magnitude earthquake the day before. In all, the US Geological Survey (USGS) estimates that 36 earthquakes with a magnitude of 3 or higher occurred since the sequence began.

USGS is warning that there remains an 82 percent chance of an earthquake 5.0 or higher in the coming days and a 99 percent likelihood of shocks of magnitude 3 or higher, between now and January 14.

It is likely that the string of quakes is already the most damaging wave to strike the island in more than 100 years.

The epicenters of the quakes were located less than 10 miles south of the southern coast of the island between the cities of Ponce and Yauco, a region home to over 170,000 people. Residents in the region have reported that houses, schools, churches and other buildings have “simply collapsed” leaving behind a trail of devastation.

A resident interviewed by the Spanish daily El País, described his experience, 14 kilometers away from the epicenter of Tuesday’s quake, as “super strong; I could hear vibrations coming from everywhere.” 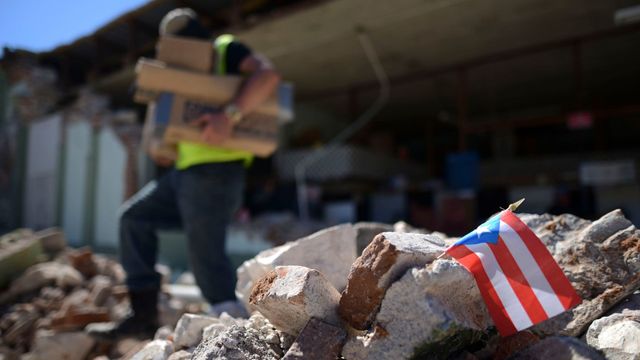 A Puerto Rican flag hangs within the rubble, after it was placed there where store owners and family help remove supplies from Ely Mer Mar hardware store, which partially collapsed after an earthquake struck Guanica, Puerto Rico, Tuesday, Jan. 7, 2020. (AP Photo/Carlos Giusti)

In the Guayanilla municipality, one of the towns closest to the epicenter, 131 people have been evacuated. At least 31 homes have been reported as “collapsed” and another 15 as severely damaged. Residents also reported that a nearly 180-year-old Catholic church in Guayanilla was destroyed, along with numerous cars, businesses and government buildings.

In another town, Guanica, at least 180 people sought shelter at the Coliseum Mariano “Tito” Rodríguez on Monday after the first earthquake destroyed the town. However, after Tuesday’s earthquake the coliseum was evacuated due to fear of damage to the structure. Residents have since been camped out in the building’s parking lot with nowhere to go.

In Ponce, Puerto Rico’s second largest city, one person has been killed, crushed by a collapsing wall. Hospitals have been forced to evacuate patients and thousands of people have been displaced throughout the region. Thousands of buildings have suffered severe damage and are close to crumbling. Hundreds of people have been forced to pull their beds into the streets in fear that an aftershock could flatten their homes.

Among the most serious consequences of the quakes has been the damage to the highly sensitive power grid, which is still severely damaged from Hurricane María in 2017. All of Puerto Rico’s power generation plants are located along the southern coast near the origin of the seismic activity.

Quake damage to the Costa Azul power plant, the largest in Puerto Rico, has led to widespread power outages throughout the island, affecting hundreds of thousands of households. The Puerto Rico Electric Power Authority (PREPA) is said to have restored power to less than a third of the affected households.

Full restoration of electric service will require two weeks, according to experts who spoke at an evening press conference on Tuesday. However, as the recent experience of Hurricane María revealed, it is very likely that residents will be without power for much longer.

The complete lack of preparedness and inadequate response to the current crisis recalls the deadly scenes following Hurricane María which left tens of thousands of residents without power for months and led to an estimated 5,000 deaths.

In fact, many of the homes destroyed on Tuesday were still awaiting repair from the damage caused in 2017, collapsing with blue tarps still protecting their damaged roofs.

Workers in Puerto Rico are also no doubt recalling the experience of 2017—when devastating reports emerged in the weeks and months after the initial storm—of residents who relied on electricity for critical treatments such as dialysis dying in their homes as the longest and largest blackout in US history unfolded on the island.

The complete lack of emergency response then, both locally and nationally, created dire living conditions in the wake of the storm. In one case, residents were forced to drink contaminated water out of desperation. Due in part to the collapse of electric service Tuesday, 300,000 people have once again been left without water.

Wanda Vazquez, Puerto Rico’s acting governor, has declared a state of emergency for the entire island and the National Guard has been mobilized to participate in rescue efforts. In a press conference Tuesday, Vazquez tried to calm the population: “We are talking about an event that Puerto Rico has not experienced in 102 years and we are talking about something that we cannot predict,” she said. Vazquez also promised that all schools will be inspected for damage by January 13, claiming that the government has “learned lessons” since Hurricane María.

Vazquez noted that her government had not had direct contact with the White House, and the Federal Emergency Management Agency (FEMA) said officials were still considering the governor’s request for an emergency declaration.

The Financial Oversight and Management Board (FOMB), an unelected body that dictates the budget for Puerto Rico, reported Tuesday that it had approved the use of emergency reserve funds from fiscal years 2019 and 2020 for expenses related to the earthquakes. These funds, however, will not cover even the smallest fraction of the damage done by earthquakes to countless homes.