Confronting a wave of public anger over its initial indifference to the country’s bushfire crisis, the Australian government of Prime Minister Scott Morrison is now engaged in an exercise of damage control to salvage its standing with limited promises of aid and assistance.

The federal Coalition government rejected expert advice that the 2019–2020 fire season would be catastrophic and refused to finance even limited increases in firefighting capabilities. Moreover, working people have watched with growing fury as Morrison and his ministers responded to the outbreak of unprecedented blazes by dismissing overwhelming evidence that the fire crisis is linked to global warming.

On Tuesday, with his government under siege, Morrison announced that $2 billion in assistance will be provided over the next two years, dispensed by a newly-established National Bushfire Recovery Agency. The money will be focussed in particular on business with emergency financial grants to farmers and small business owners, the rebuilding of damaged roads, bridges and infrastructure and the provision of mental health services in affected communities. Funds will also be used to promote tourism in the numerous tourist-reliant towns ravaged by fire. 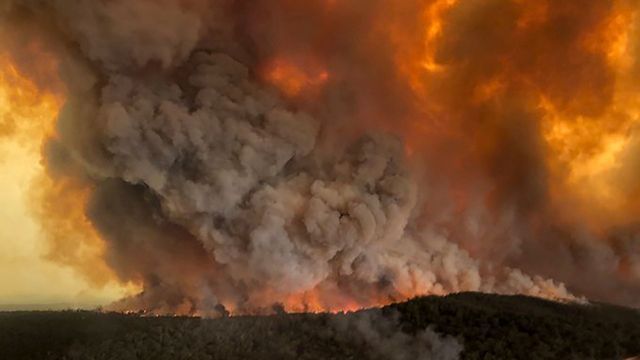 Wildfires rage under plumes of smoke in Bairnsdale, Australia. (Glen Morey via AP)

The announcement followed the government’s unprecedented mobilisation of 3,000 army reservists without bothering to notify fire services as to how they would be deployed. Most have no training in firefighting and are being used to fill in the gaping logistical holes that exist because of the underfunding of civilian emergency services. They are loading and unloading trucks, delivering supplies, clearing roads and burying the carcasses of thousands of livestock killed by the blazes.

State governments have also brought forward their own relief measures. In Victoria, the Labor government of Premier Daniel Andrews, which has presided over the running down of the state fire services, has announced the establishment of “Bushfire Recovery Victoria.” The agency has been allocated an initial budget of just $50 million with other money to come from a government-run charity collecting donations.

In New South Wales, where the losses have so far been the worst, the state Coalition government today announced a $1 billion package to assist in the rebuilding of fire devastated communities. It also unveiled a scheme that allows affected farmers, businesses and non-profit organisations to apply for up to $15,000 in assistance. The South Australian government is soliciting corporate and private donations for a “State Emergency Relief Fund.”

In contrast to these limited government measures, there has been an outpouring of public sympathy and support for those impacted by the fires. Charities appealing for food and clothing to send to the fire victims have been overwhelmed with contributions. An online appeal launched by comedian Celeste Barber, with an initial aim of raising $750,000 for the volunteer NSW Rural Fire Service (RFS), has collected over $45 million so far. A Red Cross fire assistance appeal has raised a similar amount. A Salvation Army appeal has collected over $15 million.

Australian and international artistic celebrities, including Nicole Kidman, Kylie and Dannie Minogue, Russell Crowe, Chris Hemsworth, Pink, the rock band Metallica and Elton John, have all announced large personal donations. The Business Council of Australia, representing the largest companies in the country, has asked its members to finance a modest $25 million trust to provide long-term education and other support to the children of firefighters who have lost their lives. Major Australian-based banks and corporations have announced donations of between $1 million and $5 million.

Donations from around the world are also flooding into animal welfare organisations, in response to the footage that has been broadcast of the fire impact on koalas and other native wildlife, and the estimate that at least 500 million animals have been killed.

More than 2,000 homes have burnt to the ground and hundreds more have been damaged. Hundreds of vehicles have been destroyed. Affected people will have to wait for insurance pay-outs before they can even begin to consider whether they rebuild their lives. A Victorian government survey in 2017 found that 26 percent of households in the state had no insurance, and 28 percent were underinsured. So far, 8,000 fire-related insurance claims have been filed across the country, totalling barely $700 million—an average of just $87,500 per claim.

Farms have lost not only livestock, outbuildings, equipment and fencing, but the land itself will take time to recover. Even the most comprehensive insurance pay-outs will not cover the full losses. Many farmers face the wrenching decision of whether re-establishing their operations is even worth the years of financial hardship and stress.

People who suffered physical injuries defending their homes or evacuating from them are not eligible for compensation. Tens of thousands of casual and contract workers who have not been able to work for weeks due to the fires will not be compensated. Unemployment and poverty will soar in affected areas. The tourism will take years to recover—regardless of government-funded advertising campaigns.

Moreover, the federal and state governments have no plan, let alone funding, for the urgently needed expansion of fire and other emergency services and fire prevention measures. The 2019–2020 fire season has already been devastating and the most intense summer months have only begun. The reality, however, is global warming means conditions will only worsen in future years.

Billions of dollars are required to finance the immediate recruitment and training of a standing, professional national firefighting force, equipped with its own fleet of aircraft and helicopters and array of heavy earth-moving and clearing vehicles. Local volunteer fire brigades and overstretched national and state park services are unable to carry out necessary hazard reduction measures during the winter months. More funding is required to ensure that local volunteer fire brigades have up-to-date firefighting vehicles and equipment and to fully pay their members for the time they take away from their work or businesses.

The entire political establishment is complicit. Both the opposition Labor Party and the Greens far from condemning the Morrison government are pushing for another Royal Commission inquiry into the fire crisis as a means of defusing public anger.

Yet the lack of preparedness for the scale of the 2019–2020 fires is in part due to the fact that federal and state governments, both Coalition and Labor, have ignored the main recommendations of previous inquiries into the impact of previous fires and other disasters on the grounds they would be too costly to implement.