Mass outrage and revulsion are being voiced across India at the pre-planned, Sunday night attack against students at New Delhi’s Jawaharlal Nehru University (JNU), one of the country’s premier institutes of higher learning.

Members of a right-wing student organization, the Akhil Bharatiya Vidyarthi Parishad (ABVP), along with Hindu supremacist thugs from outside JNU stormed the campus, including women’s hostels, and beat up students and faculty members using iron rods, sticks, bricks and sledgehammers. Student activists and leaders were specifically targeted. At least 40 students and two faculty members had to be hospitalized, with several suffering severe head wounds and broken limbs from beatings inflicted by the fifty-odd masked attackers.

The attack was facilitated by a still unexplained power outage that plunged much of the campus into darkness.

The ABVP is the student wing of the Hindu-extremist paramilitary Rashtriya Swayamsevak Sangh (RSS), the organization from which India’s ruling Bharatiya Janata Party (BJP) emanates and which continues to play a major role in its affairs. 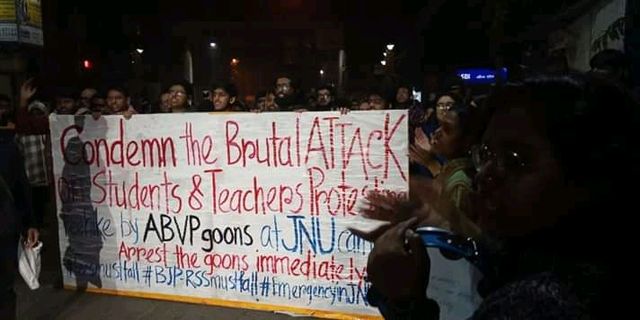 Sunday’s attack was carried out against the backdrop of three months of protests by JNU students against the university administration’s doubling of hostel fees, and mass protests across India against the BJP government’s anti-Muslim Citizenship Amendment Act (CAA), which it rushed through Parliament in the second week of December.

To date none of the attackers have been caught by the police who still claim to be working to identify the culprits.

This foot-dragging is deliberate. Many high police officials are sympathetic to the Narendra Modi-led BJP government and the Hindu-supremacist right. Moreover, there is much evidence to show that the Delhi police colluded in the goon attack.

On the night of the attack, 200 police who were gathered outside the campus conspicuously did not intervene until after the Hindu extremist thugs had completed their rampage and fled.

Since Monday, students in Kolkata, Chennai, Hyderabad, Bengaluru, Mumbai, Chandigarh and many other cities across India have joined rallies and demonstrations to passionately express their solidarity with the JNU students and denounce the ABVP thugs and their political sponsors in the BJP government.

From the police and university administration’s response to the attack, to its venue and timing, the circumstances point to its having been carried out with the connivance, if not at the direct behest, of the BJP government.

The Modi government has responded to the mass opposition to the discriminatory CAA with repression and lethal violence.

On December 15, Delhi police invaded Jamia Millia Islamia University in Delhi and carried out a brutal attack on students. In a similar bid to snuff out the wave of protests against the CAA, police in Aligarh, some 80 miles or 130 kilometers southeast of Delhi, carried out a similar attack on Aligarh Muslim University students the same day.

Students at JNU have long been targeted by the Modi government because of their association with left-wing politics and strident opposition to the BJP’s Hindu communalism and cultivation of reaction and religious obscurantism.

While the Modi government has since moved to publicly distance itself from last Sunday’s attack, its initial response, a full-throated denunciation of protesting students, all but announced its support. On Sunday evening, the official BJP website tweeted its “condemnation of violence at JNU,” then lashed out at the student protesters who were the target of the attack. “This is a desperate attempt,” declared the BJP, “by forces of anarchy, who are determined to use students as cannon fodder, create unrest to shore up their shrinking political footprint. Universities should remain places of learning and education.”

Leading members of the Modi government have repeatedly tarred JNU students as “anti-national,” especially after some students staged a protest in 2016 to mark the anniversary of the legal lynching of Afzal Guru, a Kashmiri activist the Indian state falsely convicted as the so-called mastermind of the mystery-shrouded 2001 attack on the Indian Parliament.

Since it came to power in 2014, the Modi government has repeatedly used the ABVP as its shock troops to attack students at JNU and other campuses. Through the Home Ministry, which has wide powers over police and security matters in the Delhi Union Territory, it has also repeatedly unleashed the police to beat up JNU students and bring bogus charges against them, including of sedition.

Ms. Aishe Ghosh, the president of the JNU Students’ Union (JNUSU), who was herself severely beaten in Sunday’s attack, suffering multiple blows to the head with iron rods, spoke at a press conference on Monday with her head still fully covered by bandages.

She accused a group of JNU professors who are RSS supporters of agitating for violent attacks on JNU students in the days before Sunday’s brutal assault.

She also demanded the resignation of JNU Vice-Chancellor M. Jagadesh Kumar. A BJP government appointee who has repeatedly attacked student’s democratic rights, Kumar has flaunted his disregard for the well-being of the injured students and faculty, and insinuated Ghosh and other student leaders are to blame for having incited violence.

Although police have made no arrests for last Sunday’s savage attack, acting on a complaint from Kumar they have filed First Information Reports against JNUSU head Ghosh and 19 others for allegedly damaging a computer server on Saturday.

It is widely recognized that the Modi government, shaken by the sudden eruption of mass opposition, is behind the fascist attack on the JNU students. An editorial in the Hindu declared, “The JNU attack couldn’t have been carried out without the connivance of those in power.”

For his part, Arvind Kerjiwal, Delhi’s Chief Minister and the head of the Aam Aadmi Party, has tried to excuse the actions of the Delhi police, by pointing to “orders from above.” “Whatever cycle of events happening now is not the Delhi police’s fault,” Kerjiwal told a press conference Thursday. “If constables are told ‘let violence happen, do not enter inside, stay outside,’ how can they go inside?” 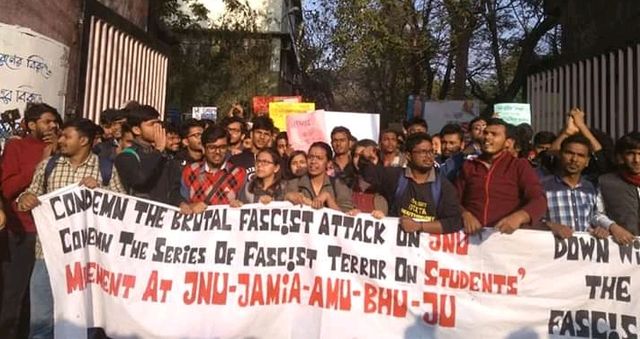 WSWS correspondents spoke to students in Chennai and Kolkata protesting the attack on the JNU students.

Vinothini, a medical student in Chennai, said: “The attack on JNU students is a brutal act carried out by the Hindu communalist ABVP guided by the RSS and BJP with the support of the state and police. The BJP government is using fascist methods of rule and is trying to intimidate Muslims and other minorities.”

“As you have explained, I really feel the need for communism. It’s not a fight between communalism and secularism, but rather communalism and communism. Nobody has the right to say you should not enter this country or that country, like how Trump is trying to block Mexicans from going to the USA. Everyone is a global citizen. As a medical student I feel the government is attacking public health care. I support the struggle for global socialism and international communism.”

Hanish, a 30-year old teacher who attended the same Chennai protest, commented: “The attack on JNU students by ABVP and RSS goons is state-sponsored violence and shows the nexus between state, the police and the Hindu-extremists. Entire democratic institutions are failing. I agree with you that to counter this pro-capitalist Hindutva agenda, we must unite the working masses against the state.”

Surjo Mukherjee, a student from Jadavpur University in Kolkata, told the WSWS: “The attacks on the students and the faculty of JNU and also the beating up which took place in the girl’s hostel of JNU which resulted in severe injuries to 18 students is not at all acceptable. We know that the government wants to steeply hike the fees at many public universities and privatize them and that is why they are sending goons to impose this.”