A recent lesson plan released by the Pulitzer Center on Crisis Reporting, in collaboration with the New York Times, asks students to choose a historical document that interests them and to read through it. Next, the assignment instructs them to erase parts of the document that they do not like or believe in.

The lesson plan, “Erasure Poetry: Highlighting Inequities, Envisioning Liberation,” explains that “erasure poems” can be “a way of reclaiming and reshaping historical documents; they can lay bare the real purpose of the document or transform it into something wholly new. How will you highlight inequity—or envision liberation—through your erasure poem?”

The Declaration of Independence as well as the 13th Amendment are among the documents suggested by the Pulitzer Center for the exercise, marked as appropriate for students of all grades. The lesson plan is one of dozens provided by the Pulitzer Center to promote a major initiative launched by the Times on August 16, “The 1619 Project.” The aim, according to the Times, is to fundamentally change the way American history is understood and taught. 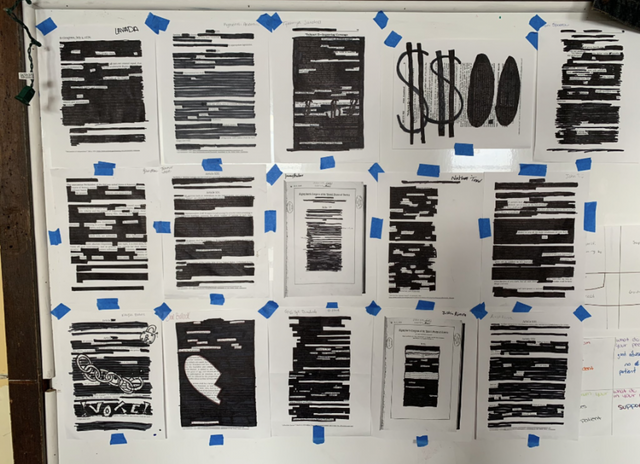 The authors of the project concentrate their arguments on the premise that all problems can only be understood through the prism of “white America” and “black America,” seeing racial division, rather than class conflict, as the fundamental and abiding conflict in US history and in the present.

The World Socialist Web Site has taken the lead in rebutting the historical falsifications of the Times’ project. The WSWS coverage has included a series of in-depth historical analyses, interviews with leading historians of the American Revolution and Civil War, and a comprehensive reply to the Times’ defense of the project.

Poisoning the Well: Schools across the US adopt the NYT 1619 Project

Despite the criticisms directed at the Times from historians, major efforts are underway to establish the 1619 Project as the official narrative of American history in schools and academic institutions. Chicago Public Schools was among the first districts to announce that the 1619 Project would be provided as a supplemental resource at every one of the system’s high schools. “Thanks to our partners at the Pulitzer Center, every CPS high school will receive 200–400 copies of the New York Times’ The 1619 Project this week as a resource to help reframe the institution of slavery, and how we’re still influenced by it today—from the workforce management system created to harness enslaved labor and the incredible wealth that came from its unsparing efficiency to the music that you may very well be listening to now,” Chicago Public School CEO Janice Jackson announced in September.

So far, five additional districts have committed to rewriting their curriculum around the project, including Washington, D.C.; Buffalo, New York; and Newark, New Jersey. Some districts have gone a step further by developing special programs wholly dedicated to a study of the project. The Carroll School in Brooklyn, NY, which serves K–5 students, is working to secure a federal Title 3 grant to fund the creation of an “after-school enrichment program” based on the project. The immense effort being made to ensure that copies of the project are distributed to school children should raise serious red flags. Many of these school systems are among the most poorly funded in the country. Just last fall, Chicago educators went on strike to demand increases in wages, funding to fix and repair decrepit and decaying school buildings, lower class sizes and the hiring of desperately needed support staff—none of which was realized. However, the dissemination of the 1619 Project is fully funded.

In addition to the material resources provided to the schools, the project’s creator and leading author, Nikole Hannah-Jones, has been dispatched on a speaking tour, attending university and college campuses throughout the country. The effort has been funded in part by the Pulitzer Center. However, some major corporations have also been involved, including Shell Oil, which sponsored a recent appearance of Hannah-Jones in Houston, Texas.

The 1619 Project will also be the basis for a series of books for readers of all ages. The series of books will include an expanded version of the magazine issue, including fiction essays and poetry as well as a graphic novel, and four “1619 Project” publications for young people. The publication of the books is being overseen by Hannah-Jones and by Jake Silverstein, editor-in-chief of The New York Times Magazine.

What is being taught in the NYT 1619 School Curriculum?

The foundational lesson plan presented by the Pulitzer Center, “Exploring ‘the idea of America’, by Nikole Hannah Jones” is designed to introduce Hannah-Jones’ essay and the 1619 Project to students. Hannah-Jones’ essay, along with all the other 1619 material, is presented to teachers and students not as one “narrative” among many, but as verified fact. Indeed, the material doubles down on many of the widely discredited historical assertions made in the project. One set of questions, for example, asks students to support the claim that the country was founded as a slavocracy: “What examples of hypocrisy in the founding of the U.S. does Hannah-Jones supply? What evidence can you see for how ‘some might argue that this nation was founded not as a democracy but as a slavocracy’?”

Another set of reading questions from the same lesson plan prompts students to expand on the project’s portrayal of the leaders of the American revolution and Civil War as racists: “What picture does Hannah-Jones paint of major figures in classical U.S. history, such as Thomas Jefferson and Abraham Lincoln? Did you learn new information about them from her essay? If so, why do you think this information wasn’t included in other resources from which you have learned about U.S. history?”

Present throughout the Pulitzer Center material is the insistence on the fundamental division of the country along racial lines. In one exercise, students are instructed to investigate the contributions of “Black America”; In another, students are asked to carefully consider a quote from the essay: “Out of our unique isolation, both from our native cultures and from white America, we forged this nation’s most significant original culture.”; Yet another asks, “How does Hannah-Jones expand on this quote from sociologist Glenn Bracey: ‘Out of the ashes of white denigration, we gave birth to ourselves’?”

Other lesson plans include “Mapping Your Community’s Connection to Slavery,” in which students are to pick an article from the project and use it to develop a pitch “for a news story about how this topic intersects with race in your community.”

The curriculum is designed to inculcate in a new generation of workers a divisive racialist historical, and by extension political, worldview. All problems are to be explained by an “endemic” conflict between the races that “we still cannot purge from this nation to this day,” as Hannah-Jones puts it. The resources for the project’s nation-wide mass marketing and distribution effort have come from its co-sponsor, the Pulitzer Center on Crisis Reporting, a Washington D.C. based non-profit founded in 2006 to support “journalists, stories, and workplaces that represent and illuminate diversity and inclusion in all forms.” The function of the Pulitzer Center has been to legitimize the dissemination of the project as a credible historical work throughout the US education system.

Funding for the Pulitzer Center comes from a wide range of sources. A number of billionaire philanthropic foundations, such as The Bill & Melinda Gates Foundation, The Rockefeller Foundation, and the Carnegie Foundation of New York, appear on its donor list, as well as other well connected companies such as BDT Capital Partners, a long-standing partner of Goldman Sachs, which handles the finances of the rich.

With the help of the Pulitzer Center, the 1619 Project was launched in September with a fully developed school curriculum based on the project’s initial 18 essays. The school curriculum was immediately made available for public use from the Pulitzer Center website. The extensive set of materials are designed for children of all ages, from elementary school through college. Throughout the Times articles and the subsequent media blitz that accompanied the project, teachers and educational staff around the country were encouraged to adopt the project and use the material, presented as authoritative historical journalism, in their classrooms.

The New York Times has taken it upon themselves to re-write school curriculum, without any oversight or input from leading historians who have spent their entire careers dedicated to the study of such history. They ignore decades of historiography of the Revolution and Civil War, which have been subject to intense and rigorous scholarly debate.

The decision to go forward with this project, and to promote so emphatically, is bound up with the immense social changes taking place in the US and around the world. Young people are moving to the left. They are more politically engaged, less patriotic, and increasingly identifying as socialists. This radicalization is taking place alongside a massive growth of the class struggle internationally. These initial struggles have terrified the ruling classes of every country. It is in this context that the 1619 Project must be understood. This is the response of the ruling class to the growth of the class struggle. They are working to systematically push racialist politics in order to divide and disorient the working class.