One day after a Ukrainian International Airlines passenger jet crashed five minutes after taking off from Tehran Airport, killing all 176 people on board, US officials have rushed to blame the tragedy on a missile fired by Iran.

According to Iranian officials, the plane, a Boeing 737-800, took off en route to the Ukrainian capital Kiev at 6.13 a.m. on Wednesday after being delayed for over an hour. Five minutes after take-off, the plane caught fire, turned into a fireball and crashed in a field. The pilot sent no signals or alarms to dispatchers before the plane crashed. Ukrainian and Iranian reports indicate that pilots tried to return to the airport just before the plane crashed.

An eyewitness said that the pilots managed to direct the crashing plane away from a residential area to farmland. Among the 176 dead were 82 Iranians, 63 Canadian citizens (many of them of Iranian descent), and 11 Ukrainians (including all nine crew members). The other victims were citizens of Sweden, Afghanistan, Germany and Britain.

According to Ukraine International Airlines, the plane was four years old and had been checked two days before the accident. 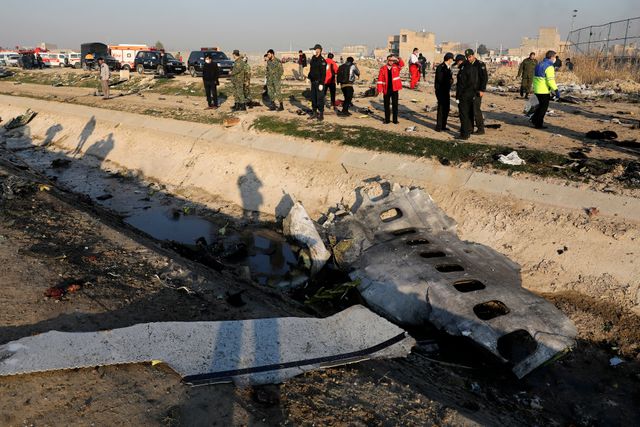 Debris is seen from the Ukrainian plane which crashed as authorities work at the scene in Shahedshahr, southwest of the capital Tehran, Iran, Wednesday, Jan. 8, 2020. The airplane carrying 176 people crashed on Wednesday shortly after takeoff from Tehran's main airport, killing all onboard. (AP Photo/Ebrahim Noroozi)

The initial Iranian account indicated that the plane’s engines had caught fire, causing the pilot to lose control. However, the Iranian government has since walked back from these statements and said that the cause of the crash remains to be established. The Ukrainian embassy likewise deleted an early tweet suggesting that the crash had been due to a mechanical failure. An Iranian investigation team was deployed to the site of the crash Wednesday morning. Members of a Ukrainian investigation team have also arrived and begun negotiations with its Iranian counterparts.

The model of the plane, the Boeing 737-800, is an earlier version of the 737-Max model. Known technical deficiencies of the latter have resulted in two plane crashes that killed 346 people (see: “One year since the first Boeing 737 Max 8 crash”).

Although its technical deficiencies are not as glaring as those of its successor, the 737-Max, there have been known defects in the 737-800 model. In the past decade, there have been several serious crashes involving the 737-800, including a crash in Russia in 2016 that killed 62 people, and one in India in 2010 that killed 158.

The plane crash near Tehran occurred just hours after Iran had launched ballistic missiles at two US bases in Iraq in retaliation for the January 3 drone assassination of Iran’s General Qassem Suleimani, prompting speculation that the crash may have been related to the escalating war crisis between the US and Iran.

With the investigation into the causes for the crash having barely begun, on Thursday, US officials rushed to blame Iran for the downing of the plane. US media, like the New York Times and CNN, reported that US intelligence had a “high level of confidence” that an Iranian anti-aircraft missile had been accidentally fired at the plane. There were also claims that the Pentagon and intelligence officials had identified the signature from the radar of an Iranian anti-aircraft missile battery that had locked on the aircraft before it crashed.

Similarly, the Guardian quoted British officials as claiming they had seen intelligence suggesting that the plane was hit by an Iranian air defence missile. One British source said, “The assessment is that it looks like it is a tragic accident.” Several of the anonymous officials suggested that Iran had shot down the plane “by mistake,” believing it to be an American war plane.

Donald Trump stated that he had “suspicions” the plane might have been mistakenly shot down. “Someone could have made a mistake on the other side. Some people say it was mechanical, I personally don’t think that’s even a question. I have a feeling that … something very terrible happened.” Canadian Prime Minister Justin Trudeau has also stated that Canada had intelligence suggesting that Iran shot down the plane, stating that the strike “may have been unintentional.”

A few hours after these statements, the New York Times published a 19-second video, alleging that it “appears to show” an Iranian missile hitting the Ukrainian plane. No evidence for this claim was provided, nor is it evident from the video itself.

Should it turn out that the plane was mistaken by Iran as part of a US attack and was accidentally shot down, the main responsibility for this horrific disaster would lie with US imperialism. The reckless assassination of Suleimani, illegal under international and US law, has triggered an acute war crisis, endangering the lives of millions.

However, the real causes for the crash remain entirely unclear, and there are no grounds to trust the “suspicions” of Donald Trump or the “high level of confidence” of the CIA or MI5, all of whom are notorious for systematically lying to the public for the purposes of war propaganda and manufacturing of pretexts for aggression.

Iran has denied that it fired a missile downing the plane. A special session of the Iranian committee that oversees aviation accidents reviewed the possibility that the plane was shot down, but dismissed it based on evidence that the pilot had tried to turn back to the airport. Hassan Rezaeifar, the head of the committee, told the Guardian: “As the pilot of the Ukrainian plane was trying to get back to the airport, the scenario of a missile attack … is off the table.”

The Ukrainian government, which is closely aligned with the US war drive against Russia, has initiated an investigation into the plane crash that is personally overseen by Ukrainian President Volodymyr Zelensky. The Ukrainian press had welcomed the killing of Suleimani, who is reported to have worked closely with Russia on military operations in Syria. In a phone call with US Secretary of State Mike Pompeo, Zelensky assured the US of his full support for the assassination.

The Ukrainian investigators include members of the team that investigated the shooting down of Malaysia Airlines Flight 17 (MH17) in July 2014, which killed all 298 people aboard. The investigation into the MH17 incident was directed entirely at producing “findings” to prove that Russian-backed separatists shot down the plane, despite evidence to the contrary. The plane crash and the investigation became a centrepiece of imperialist war propaganda against Russia.

Oleksiy Danilov, the secretary of Ukraine’s National Security Council, stated, “We will use all our best practices from investigating the attack on MH17 to find out the truth in the case of the Ukrainian plane in Tehran.”

Danilov also echoed reports in the Western press alleging that a Russian missile was used to shoot down the plane. The only basis for these accusations are images that have been circulating on social media, allegedly showing parts of a Russian missile, allegedly found among the debris of the plane. The source and authenticity of these images have remained entirely unconfirmed, and they provide no indication of where or when the photos were taken. Iran has denied their authenticity.

The Western media has focused on Iran’s initial rejection to submit the plane’s damaged black box to the US-based company Boeing, which has intimate ties to the US government, as an indication that the plane may have been shot down.

However, the Ukrainian journalist Yuri Butusov, who has generally supported the imperialist-backed coup in Ukraine in February 2014, cited one of his sources in the Ukrainian investigation team in a Facebook post on Thursday, indicating full readiness by the Iranians to cooperate on the investigation: “Both black boxes have been found. They are damaged by the fire and the crash but can be restored. The Iranians are not preparing to cover up anything. In accordance with the Chicago Convention, they are preparing to provide access for the investigation and decoding of the black boxes to all sides, including the Americans, the manufacturers of the plane [Boeing], as well as to all countries whose citizens died … The Iranians demonstrate a normal level of dialogue. There are no signs that they are deliberately trying to hide any information, so far everything has proceeded in a quite correct and open manner.”

The Ukrainian investigation team is considering four possibilities for the plane crash: a terrorist attack, a missile strike, a mechanical defect and a collision with another flying object.