After millions march against US imperialism in the Middle East

At his first campaign event of the new year, President Donald Trump boasted before a crowd of supporters in Toledo, Ohio of having “executed” Iranian Gen. Qassem Suleimani. Touting the record $738 billion military budget passed last month with overwhelming Democratic support, Trump presented the cowardly murder of the top Iranian military commander as a demonstration of American power. He mocked constitutional limits on his authority to unilaterally wage war around the world.

Trump spoke on Thursday night at the Huntington Center in Toledo, a facility that holds 8,000 people, a relatively small crowd for a Trump rally. His fascistic bluster could not conceal the fact that only days before, millions had marched in Iran, Iraq and other parts of the Middle East to commemorate the murdered general and denounce US imperialism. 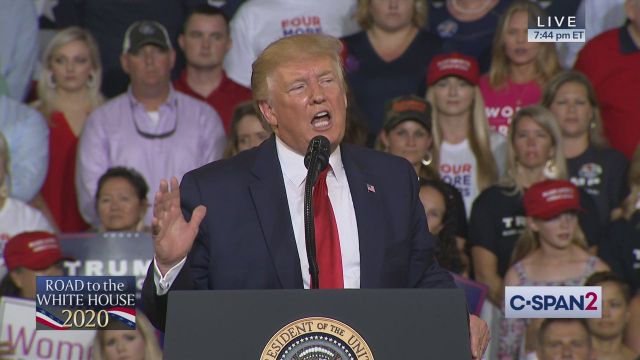 Countless millions more in the United States and around the world have recoiled in shock and horror over the criminal state assassination of a high government official, recognizing it to be a war crime and act of war that threatens to plunge the entire Middle East, and perhaps the entire world, into a new war, with incalculable consequences.

After boasting of having “taken out” ISIS leader Abu Bakr al-Baghdadi last October, Trump delivered a rant against Suleimani, typical of the rhetoric coming from leading Republicans and Democrats alike. Calling the general “the world’s top terrorist,” Trump declared:

“For years the sadistic mass murderer Qassem Suleimani planned and executed attacks against American targets, killing and wounding thousands of US service members and many, many thousands, and even hundreds of thousands, of other people. As the leader of Iran’s terrorist Quds Force, Suleimani spread death, destruction and mayhem across the Middle East and far beyond.”

Such rhetoric will not fool millions around the world who know that the charge of spreading “death, destruction and mayhem across the Middle East and far beyond” is an infinitely more apt description of Trump and the US presidents and military commanders who have preceded him over the past three decades. It is they who are responsible for the destruction of entire societies and the death, wounding and displacement of millions in the region.

Trump singled out Suleimani’s role in the end-of-year protests against the US embassy in Baghdad, boasting that he had ended the threat to the US facility quickly by dispatching US military forces. “This was the anti-Benghazi,” he said, referring to the 2012 siege of the US consulate in the Libyan city that led to the death of US personnel. “We got there very quickly. This was the exact opposite.”

In fact, the siege of the US embassy lasted two days, as US-trained Iraqi security forces refused to oppose the Shia militias. It ended only when the militia leaders, likely under orders from Suleimani, ordered the crowds to disperse.

Trump went on to claim that Suleimani “was looking very seriously at our embassies and not just the embassy in Baghdad.” No such claim was made by US officials in classified briefings to Congress earlier this week, and Secretary of State Mike Pompeo was obliged to partially walk back Trump’s assertion.

The US president then proceeded to denounce the Democrats for their half-hearted and impotent criticisms of the drone missile assassination, stating: “And yet now I see the radical left Democrats have expressed outrage over the termination of this horrible terrorist.

Having just depicted Suleimani as a crazed murderer of Americans, Trump’s charge that the Democrats would have leaked the planned attack in order to protect him amounts to an accusation of treason.

While Trump was talking about the killing of Suleimani, a man in the crowd shouted, “Kill them all.” Trump replied, “We stopped him quickly and we stopped him cold.”

The speech featured all of the fascist tropes that have become standard fare in Trump’s stump speeches: promotion of the military, the police and the ICE immigration Gestapo; attacks on the press; attacks on abortion rights; boasts about building his border wall with Mexico; rants against socialism; and, above all, racist agitation against immigrants.

This included the following violent incitement: “Far-left radical politicians support deadly sanctuary cities, demonstrating their contempt, scorn and disdain for everyday Americans and the American family. These jurisdictions release dangerous violent criminal aliens out of their jails directly onto your street where they are free to rob, attack and kill American citizens…

“They [the Democrats] want open borders… Innocent Americans are being brutalized and murdered by illegal alien criminals.”

Trump attempts to project an image of US invincibility under conditions where American capitalism is confronting intractable contradictions internally and internationally. The murder of Suleimani initiates a process that leads inexorably to another major war in the Middle East that will prove even more disastrous than the failed US interventions over the past three decades—in Afghanistan, Iraq, Syria, Libya and Yemen.

Under conditions of a growing upsurge of working class resistance within the US and around the world, the ruling class is seeking to deflect class tensions outward, against an external enemy. Trump’s provocations against Iran are an expression not of strength, but of the weakness and decline of US imperialism.

That, however, does not make the drive to war and dictatorship less dangerous. Trump’s biggest asset is his nominal political opposition, the Democratic Party. He delivered his speech just hours after the Democrats passed a toothless resolution in the House of Representatives billed as a measure to impose congressional restraint on Trump’s war-making powers.

The bill, however, is a political fraud that does nothing of the kind. Brought before the House by former CIA and Pentagon analyst Rep. Elissa Slotkin, it is in the form of a non-binding “concurrent resolution,” which does not go to the president for his signature and does not have the force of law.

The Democrats’ impeachment drive is not over Trump’s war-mongering, his pogrom against immigrants, or his unconstitutional arrogation of quasi-dictatorial powers. It is over his temporary suspension of military aid to Ukraine, seen by the CIA and sections of the military and foreign policy establishment as a threat to the long-running drive to transform Ukraine into a staging ground for war against Russia.

The Democrats are no less petrified than Trump and the Republicans by the growing movement of the American and international working class, the mass opposition to war and the increasing support for socialism. Their role is to suppress the opposition of the working class and enable the military-intelligence establishment to create more optimal conditions for war against Iran and more formidable obstacles to US global hegemony such as Russia and China.