In a major escalation of online censorship, Google, Facebook and Twitter have deleted accounts and removed social media posts on multiple platforms that are opposed to the criminal assassination of Iranian General Qassem Suleimani by the Trump administration in a drone missile strike on January 3. There are indications that these censorship moves have been carried out at the direction of the US government.

YouTube, the video sharing platform owned by Google, on Monday deleted the account of Iran’s Press TV UK, under orders from the US government, and Facebook and Instagram have removed posts expressing support for Suleimani by dozens of Iranian journalists and other social media influencers.

Reports by alternative news sources said on Tuesday that YouTube terminated the account of the British wing of the Iranian-based Press TV without warning or explanation. As of this writing, no major corporate news organization in the US has reported Google’s blatant censorship. 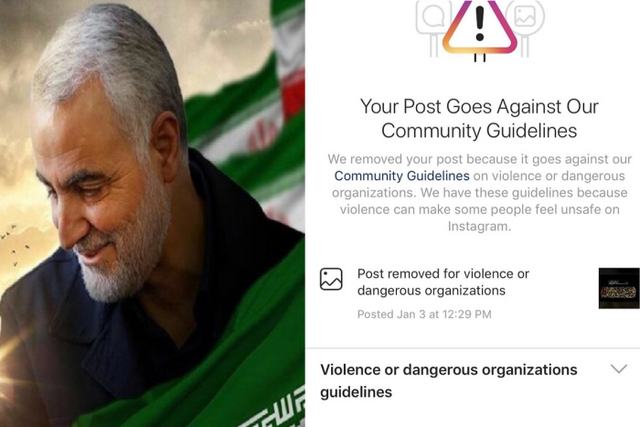 On Monday, Press TV UK posted on Twitter that its YouTube account had been permanently disabled without justification “amid US-led anti-Iran sanctions and hostility.” Press TV is a 24-hour English and French language news and documentary network affiliated with Islamic Republic of Iran Broadcasting (IRIB) with headquarters in Tehran. Press TV UK’s YouTube channel has 28,000 subscribers.

Press TV UK journalist Ahmed Kaballo posted a video on Twitter in which he said, “Google acted as the judge, jury and executioner. We don’t know what we’ve done wrong, we don’t know what laws we’ve violated and there is no right to appeal. ... Even if you don’t agree with what we say, I urge to defend our right to say it because first they came for Press TV, who knows who will be next?”

A statement from Press TV said, “After the illegal assassination of Lieutenant General Qassem Suleimani by the United States, Facebook began removing all social media posts and banning users for sharing information which painted a picture of Iran’s most beloved general, which went against the Western media narrative. Included in this anti-Iran purge from social media and Google is now Press TV UK’s YouTube account.”

Indicating that the censorship is being directed by the US government, a Facebook spokesperson told the Australian Broadcasting Corporation (ABC) on Tuesday that it had removed pro-Suleimani social media posts and accounts because they were in violation of US sanctions laws. ABC reported that the accounts of Iranian journalists had been deleted by Facebook, according the Association of Iranian Journalists in Tehran (AIJT).

The Facebook statement said, “To comply with these [US] sanctions, we remove accounts maintained by or on behalf of a sanctioned party as well as remove content posted by others that supports or represents the sanctioned group or individual. ... We review content against our policies and our obligations to US sanctions laws, specifically those related to the US government's designation of the IRGC and its leadership as a terrorist organisation.”

In every instance, social media users impacted by the censorship were sent messages saying that their posts or accounts had been deleted because they violate community standards or guidelines with no further information or directions as to how the accounts can be restored.

ABC also reported that Roshan Rizvi, a publisher who manages several Facebook accounts on Indian politics and has more than 40,000 followers, had lost access to his accounts after he was banned for commemorating the death of Suleimani. He told ABC, “He [General Suleimani] was a saviour for those who were trapped under the brutal killers called ISIS.”

Rizvi also said Twitter had also shut down his accounts saying, “I didn't post anything, I just followed an account that was giving live updates of the attack that happened at Al-Assad base and my account was suspended.”

As many journalists have pointed out, due to the global nature of social media, the anti-Iranian censorship is a threat to independent media. Anthony Bellanger, General Secretary of the International Federation of Journalists (IFJ), said, “At a time when Iranian citizens need access to information it is unacceptable that Instagram should choose to censor Iranian media and individual journalists and users.”

Although Facebook and Twitter are banned in Iran, users are able to gain access through virtual private networks (VPNs). On the other hand, Instagram is not banned Iran and there are an estimated 24 million Iranian users of the platform. There have been some reports that the censorship has extended beyond Suleimani and include posts mentioning Iranian Ayatollah Ali Khamenei.

Ben Norton, a reporter for the Grayzone and Consortium News, reported on Sunday that the latest social media censorship operation is part of an information war by the Trump administration against Venezuela, Syria and Iran.

Enlisting the social media monopolies in its assault, Norton wrote, “In the first two weeks of January, Twitter suspended dozens of accounts run by real, live people—not bots—in Venezuela, Iran and Syria. Those erased from the website included heads of state, numerous state institutions, media outlets, and many average people who do not work for their governments.”

Norton said that the social media giants are closely linked to the US government and have increasingly acted as an extension of it, specifically targeting the accounts of officials within governments “targeted by Washington for regime change, also including China, Russia, Cuba, Palestine, and beyond.”

In the case of Venezuela, Norton reported that Twitter has suspended hundreds of government accounts and those of civilian leftists while “simultaneously verifying and promoting the accounts of US-backed opposition activists and coup-mongers, like Juan Guaidó and his rapidly fading shadow regime.”

These actions by Twitter show how the social media company “relies on organizations funded by the US government and European allies to crack down on foreign state media and suspend accounts that challenge Washington’s narratives.”

Norton’s report in the Grayzone says that as of January 7, Twitter suspended the major accounts of the Venezuelan government such as the National Guard, Navy, Air Force, Strategic Command, Petroleum Ministry, Penitentiary Services Ministry, National Commission of Information Technology and Foundation Engineering Institute along with those of the Capital District and the office of the Vice President of the economy and the press office of the armed forces.

Norton also reported that Twitter repeatedly suspended or restricted and then restored beginning on January 4 the official account of Syrian President Bashar al-Assad.

The enlistment of the Silicon Valley social media corporations in a worldwide censorship operation by the US government is a warning to the working class internationally. It indicates that pressure for war within the American ruling establishment has reached an unprecedented degree of intensity and that control of information and regulating the ability of masses of people to communicate with each other is a primary concern.

The testing and perfecting of the practical integration of the tech monopolies such as Google, Facebook and Twitter into the military-intelligence apparatus against foreign targets is part of the preparations for the coming confrontation with the number one enemy of US imperialism: the American working class.