On Monday, for the second time in three days, President Donald Trump tweeted support as thousands of gun-rights activists, many of them carrying semi-automatic weapons, descended on Virginia’s capital, Richmond. The protest was to denounce mild gun control measures moving through the Democratic-controlled state legislature.

According to Virginia’s public safety secretary, some 6,000 protesters passed through airport-style checkpoints to listen to an hour of speeches within the fenced-off State Capitol grounds, where Governor Ralph Northam had imposed a ban on guns and other weapons under a state of emergency he declared last Wednesday. 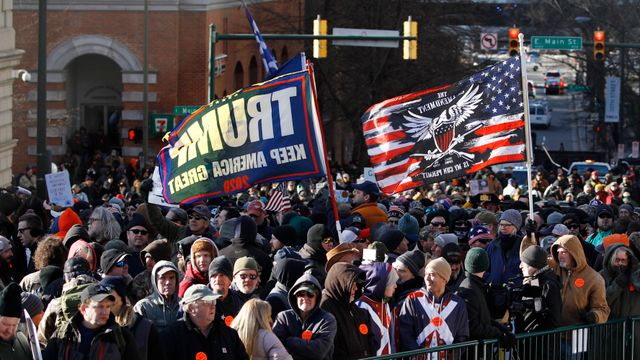 Thousands more people, many wearing camouflage and bullet-proof vests and carrying military-grade weapons, rallied in the streets of Richmond just beyond the secured Capitol grounds. News reports estimated the total turnout in the tens of thousands. Demonstrators chanted “We will not comply!” and circulated petitions demanding the ouster of Northam.

Over 100 localities in Virginia have declared themselves to be “Second Amendment sanctuaries.” Officials in these “sanctuaries” have pledged not to enforce any gun control measures passed by the state legislature and signed into law by Northam.

The crowd outside the secured perimeter on Monday included a number of armed militia groups that mobilized in force for the event.

Northam, a Democrat, had cited “credible intelligence” that neo-Nazis were planning to join the pro-gun rally and incite something similar to the August 2017 “Unite the Right” march in Charlottesville, Virginia. That rally ended with the murder of 32-year-old anti-fascist counter-demonstrator Heather Heyer by a neo-Nazi. 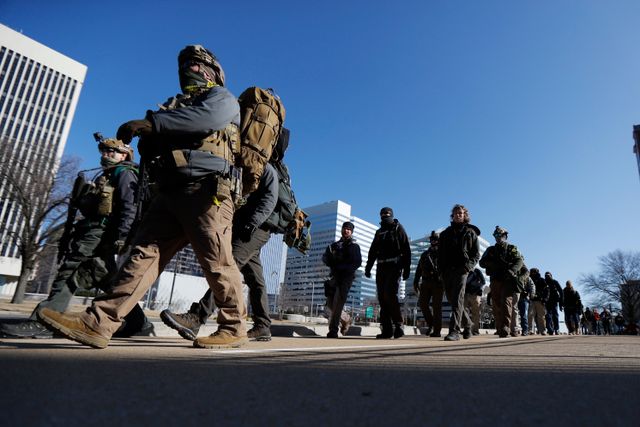 At the Charlottesville event, fascists giving Nazi salutes and chanting “The Jews will not replace us!” and “Blood and soil” marched in a torchlight parade through the campus of the University of Virginia. Following the event and the death of Heyer, Trump declared that the far-right marchers included “very fine people.”

Last Thursday, one day after Northam’s state of emergency declaration, federal authorities announced the arrest of three members of the neo-Nazi group “The Base,” who were heavily armed and allegedly planning to carry out a violent provocation at the Richmond rally. The following day they announced the arrest of at least three more members of the group.

That day, Trump tweeted full support for the impending right-wing rally, writing: “Your 2nd Amendment is under very serious attack in the Great Commonwealth of Virginia. That’s what happens when you vote for Democrats, they will take your guns away. Republicans will win Virginia in 2020. Thank you Dems!”

Just before the scheduled start of the rally on Monday—the day of the annual Martin Luther King Jr. national holiday and the eve of the substantive start of his Senate impeachment trial—Trump retweeted his full support, declaring: “The Democrat Party in the Great Commonwealth of Virginia are working hard to take away your 2nd Amendment rights. This is just the beginning. Don’t let it happen, VOTE REPUBLICAN in 2020!”

These interventions are part of Trump’s response to impeachment and his strategy for the 2020 elections and beyond. He is relying not only on his legal defense in the Senate trial, but is deliberately inciting violence against his political opponents and seeking to instigate the growth of a fascist movement in the US. In a series of campaign speeches and Twitter posts, he has labeled the Democrats as far-left radicals and “socialists” and denounced them as traitors. He has stepped up this fascistic agitation since his order to assassinate Iranian Gen. Qassem Suleimani earlier this month.

This agitation is having a predictable impact. Over the weekend, Lee Carter, a Democratic state legislator, who is a member of the Democratic Socialists of America, announced that he was going to an “undisclosed location” to work on Monday instead of the Capitol building, because he and his family had received multiple death threats.

In the event, the rally on Monday, though right-wing and pro-Trump, did not have the openly neo-Nazi character of Charlottesville. Under conditions of a heavy police presence, including the deployment of snipers on rooftops and a ban in airspace near the Capitol, the crowd dispersed quickly after the speeches, which were given by Republican state politicians, prominent gun-rights spokespeople and some local sheriffs.

Over the weekend, the Coalition to Stop Gun Violence, a pro-gun control group, canceled its annual vigil and lobbying day, scheduled to begin later in the day on Monday, out of fear of violent attack at the hands of militia elements and fascists.

No violence or arrests were reported at the rally. The police, generally sympathetic to the demonstrators, gave them free rein to parade around with their assault rifles and other gear. The fact, however, that the event went off peacefully does not diminish the threat to the working class and to democratic rights represented by the mobilization of far-right and politically confused elements on the basis of militarism, extreme individualism and national chauvinism.

One incident that highlighted the politically sinister character of the event was Alex Jones, the pro-Trump, right-wing talk radio host, driving an armored vehicle toward Capitol Square in the run-up to the rally.

The juxtaposition of the Richmond rally and the Senate impeachment trial of Trump underscores the absence of any democratic content in the Democrats’ impeachment drive.

Over the weekend, the Democratic House managers, who will serve as prosecutors during the proceedings, released their brief against Trump. It reiterates the charge that Trump betrayed the country and undermined US “national security” by temporarily withholding $391 million in military aid to Ukraine. He then allegedly used the withheld arms package as leverage to pressure the Ukrainian government to announce a corruption investigation into former Vice President Joe Biden and his son Hunter.

This, according to the Democrats, was an attempt to secure Ukrainian interference in the 2020 elections against a possible Trump rival, Joe Biden—a repeat of the supposed conspiracy between Trump and Russian President Putin against Hillary Clinton in 2016.

The Democrats are not seeking to remove Trump from office, or at least rein him in, over his very real attacks on democratic rights, his promotion of fascist violence, his illegal assassination of a high-ranking Iranian official, his destruction of the right to asylum and persecution of immigrants, his unconstitutional appropriation of Pentagon funds to build his border wall with Mexico or his repeated threats to remain in office regardless the outcome of either the impeachment trial or the 2020 vote.

Instead, they are trying him in the Senate over foreign policy differences centering on his ostensible “softness” toward Russia, and specifically because he is seen to be disrupting longstanding plans to use Ukraine as a staging ground for war against Moscow.

In its brief in response to the Democrats, Trump’s defense team asserts the authoritarian conception of the “unitary executive” to essentially argue that the president is not subject to any form of control by Congress or the courts.