Without any new evidence or even an investigation, Brazil’s Attorney General’s Office (Ministério Público Federal—MFP) has brought criminal conspiracy charges against the Rio de Janeiro-based investigative journalist Glenn Greenwald. He is charged for using leaked chats to expose corruption at the heart of the so-called “Carwash” (Lava-Jato) anticorruption probe into the massive bribe and kickbacks scheme which was centered at the state-run oil giant Petrobras and involved the entire Brazilian political establishment. 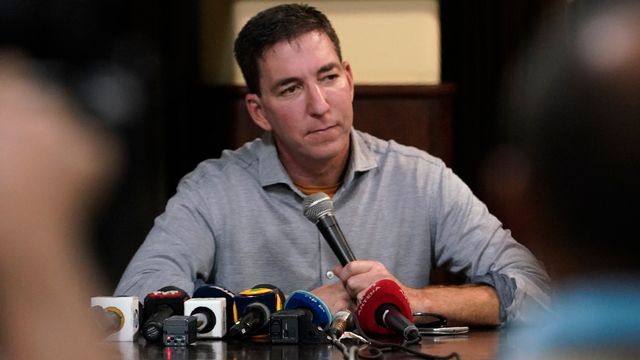 Journalist Glenn Greenwald attends a press conference before the start of a protest in his support in July last year [Credit: AP Photo/Ricardo Borges]

The charges represent a major escalation of the multiple attacks on core democratic rights carried out by the government of Brazil’s fascistic President Jair Bolsonaro.

Greenwald, the founder of the website The Intercept Brazil—a spinoff of The Intercept, a US-based news website he had founded two years earlier—has been accused by the MFP of having “directly assisted, encouraged and guided” individuals who allegedly gained access to online chats between prosecutors and other officials involved in the Carwash investigation.

The leveling of the criminal accusations, which also implicate Greenwald in supposedly having “helped, encouraged and guided” six others accused of hacking the Telegram messaging accounts of top officials involved in Carwash, initiates a legal proceeding that must be approved by a judge to go forward. As of yet, Greenwald has not been arrested.

There is no evidence that Greenwald either participated in or facilitated any hacking, while those accused of the hacking reportedly insist that the information was obtained from Telegram cloud accounts.

The political character of the charges is underscored by the fact that the Federal Police carried out an investigation last year based on the same information now being used to charge Greenwald and declined to bring any charges. Federal Supreme Court Justice Gilmar Mendes issued a decision last August barring any further investigation based on Greenwald’s receiving, obtaining or publishing information, insisting that it would “constitute an unambiguous act of censorship.” Mendes stated Tuesday that the new charges represent a violation of his decision.

The information published by Greenwald and numerous others working on the Intercept Brazil’s journalistic investigation touched off a political firestorm because it implicated the chief Carwash prosecutor, Sergio Moro, subsequently tapped by Bolsonaro as his justice minister, in improperly coaching the prosecution in the case against former Workers Party (PT) President Luiz Inácio Lula da Silva—popularly known as Lula—and steering the Attorney General’s Office to drop charges against politicians of other parties involved in the bribes and kickbacks scandal.

Lula’s conviction on charges of taking bribes from a major Brazilian construction contractor led to his imprisonment and jailing in 2018, disqualifying him as a candidate in the 2018 election and arguably paving the way for Bolsonaro’s presidency.

Prosecutor Wellington Oliveira has brought the new charges, accusing Greenwald of criminal association and illegal hacking of telephones, claiming that new information had arisen from the investigation into the alleged hackers’ computers implicating the journalist in telling them to delete messages sent to him. This, the prosecutor claimed, was evidence of “clear conduct of participating in aiding a crime” and “seeking to subvert the idea of protecting a journalistic source in an immunity for guiding criminals.”

Oliveira has previously served as an attack dog for the Bolsonaro regime, bringing charges against the president of Brazil’s Bar Association Felipe Santa Cruz for slander against Bolsonaro. Santa Cruz was previously the object of the Brazilian president’s ire. Bolsonaro, a former army officer, posted a video saying that that if Santa Cruz wanted to know how his father—a political dissident who “disappeared” under the dictatorship—died, he could tell him.

Questioned by reporters, Bolsonaro expressed his visceral hostility to Greenwald, an American citizen, stating “He shouldn’t be here. Where is this guy? Is he in Brazil?” Pressed as to whether the criminal accusation wasn’t an attack on freedom of the press, the fascistic Brazilian president responded cynically, “You don’t believe in the justice system?”

Greenwald’s 2013 articles, based on documents leaked by former National Security Agency contractor Edward Snowden, won a Pulitzer Prize. He played a key role in initiating Snowden’s exposures of wholesale and unconstitutional spying by the NSA on the US and world public. The NSA whistleblower has been charged under the Espionage Act, potentially facing the death penalty, for exposing the government’s criminal acts. He has been living in forced exile in Russia for over six years.

There are stark similarities between the accusations brought against Greenwald in Brazil and the charges leveled against WikiLeaks founder Julian Assange, currently imprisoned in London’s notorious maximum security Belmarsh prison, facing extradition to the US, where he faces espionage charges and life in prison for exposing US war crimes. As with Greenwald, Assange is being accused of “conspiring” with the courageous US Army whistleblower Chelsea Manning to illegally obtain the damning information from Pentagon computers that WikiLeaks made public.

Given the ideological affinity between the fascistic presidents of Brazil and the United States, there is every reason to suspect that the persecution of Greenwald is driven not only by the anger of the Brazilian government over the Carwash exposures, but also that of Washington over the revelations concerning NSA spying.

Greenwald issued a statement Tuesday declaring, “We will not be intimidated by these tyrannical attempts to silence journalists.” The Intercept said in a statement, “There is no democracy without a free press, and defenders of the press everywhere should be deeply concerned about Bolsonaro’s latest authoritarian move.”

The criminal complaint against Greenwald has been widely denounced in Brazil. The Workers Party (PT), Bolsonaro’s ostensible political opposition, issued a statement saying that it stood “on Greenwald’s side” against the “erection of a police state.” The cybercrime law under which Greenwald is being charged was introduced by the PT government in 2012.

Meanwhile, Rodrigo Maia, the president of the Chamber of Deputies and leader of the extreme right-wing Democratic party (DEM), called the charges a “threat to freedom of the press.” The DEM is the successor to ARENA, the political party created by the military dictatorship that ruled the country from 1964 to 1985, crushing freedom of the press and murdering journalists.

Brazil’s National Federation of Journalists (Fenaj) denounced the charges against Greenwald and warned against “the threat of restrictions on the freedom of the press, principally when they conflict with the constituted authorities.” It accused the Attorney General’s Office of engaging in “a form of intimidation of the journalist and a threat against journalistic activity.”

The federation insisted that it is not the job of journalists to determine the legality of how information they receive has been obtained, but to verify its accuracy before making it public. “Public interest and the search for true information are the driving forces of journalism, and no professional can be denounced as a suspect of having committed a crime just for honoring the commitment of their profession.”

The attorneys' organization Prerrogativas, which includes the most prominent criminal defense lawyers in the country, issued a statement expressing its “indignation” over the charges, warning, “This accusation violently attacks freedom of the press in seeking to impose criminal responsibility on a journalist for his professional activity. This accusation is a dangerous escalation in the rise of authoritarianism, as well as consecration of the political use of the penal process and the fragility of our democracy.”