New pamphlet from Mehring Books on the 1619 Project 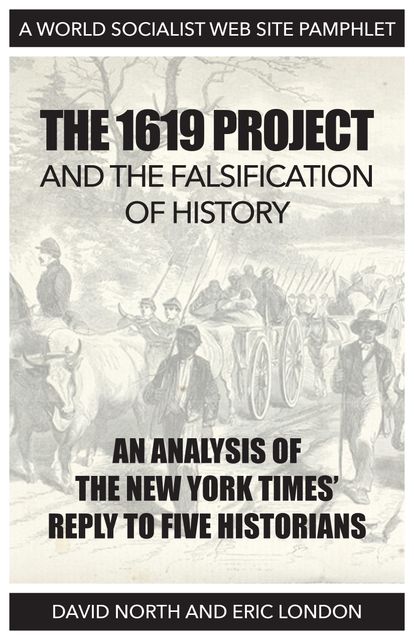 The 1619 Project and the Falsification of History

When five eminent historians, James McPherson, Gordon Wood, Victoria Bynum, James Oakes, and Sean Wilentz, wrote a letter to the New York Times Magazine objecting to historical inaccuracies in the 1619 Project initiated by the Times in August 2019, the Magazine’s editor, Jake Silverstein, flatly rejected their objections and refused to correct the many errors the historians pointed out in relation the American Revolution and the Civil War.

The historians felt compelled to write their letter, in part, because the 1619 Project has been transformed into American history school curriculum aimed at reaching hundreds of thousands of students.

David North and Eric London have written an extensive reply to Silverstein, published by the World Socialist Web Site, endorsing the historians’ insistence that historical “matters of verifiable fact, which are the foundation of both honest scholarship and honest journalism” contained in the 1619 Project be corrected and publicly acknowledged.

North and London further examine the relationship between serious journalism and historiography, citing examples from the Times itself over many years, and introduce damning new criticisms of the falsification of history presented in the 1619 Project and Silverstein’s reply to the historians.

You can purchase this pamphlet from Mehring Books. Buy five or more and get a 15 percent discount!