This week in history: January 27-February 2

25 years ago: US emergency loan to Mexico in peso crisis 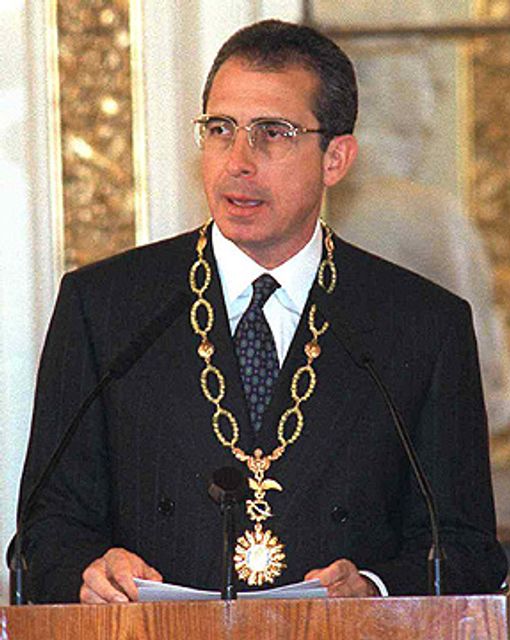 On January 31, 1995, US President Bill Clinton invoked executive power to extend a $50 billion loan to Mexico amid the ongoing peso crisis. The bailout was motivated by the need to appease Wall Street investors and avert total international financial collapse. It was also an effort to deter a potential surge in immigration due to increased austerity measures and the instability of the Mexican economy.

The $50 billion rescue package cobbled together by Clinton required administration by the International Monetary Fund (IMF), with support from the G7 countries and the Bank for International Settlements. IMF Managing Director Michael Camdessus described the events as “the first major crisis of our new world of globalized finance,” and indicated that there were at least ten further countries which could potentially be thrown into similar emergencies throughout the rest of 1995.

The bailout was proposed with the understanding that failure to assist would trigger a chain-reaction panic in world markets. Federal Reserve Board Chairman Alan Greenspan noted that the prospect of a Mexican default on bond payments had begun to affect financial markets “in other developing countries, those not even remotely related to Mexico, for example, in Asia and in Central Europe, as well as in a few industrial countries.”

The New York Times reported that Clinton administration officials were privately concerned about “the spread of anti-government uprisings” if the bailout failed. Demonstrations erupted in Mexico City against the handing over of the nationalized oil company Pemex and other state assets to US control. Mexican President Ernesto Zedillo Ponce de Leon ordered thousands of troops into Chiapas, Mexico’s poorest state, to crush a 13-month-old rebellion and arrest its leaders, aimed at reassuring Wall Street and intimidating Mexican workers.

The bailout drew significant right-wing criticisms along nationalist lines from both Democrats and Republicans, including Democratic Minority Whip David Bonior, among others. Former Republican presidential hopeful Patrick Buchanan called the bailout a “daylight robbery of the nation’s wealth. [It is money] the American taxpayers will never see again.”

The crisis was triggered by Washington’s pursuit of its own interests, driving up bank rates despite the destabilizing impact in Mexico. Since 1982, successive Mexican governments pursued policies dictated by the IMF to create an “export economy,” selling state enterprises and reducing social spending and living standards to meet debt payments to Western banks. That process culminated in NAFTA with the US and Canada, in which remaining barriers on imports and investment were toppled. 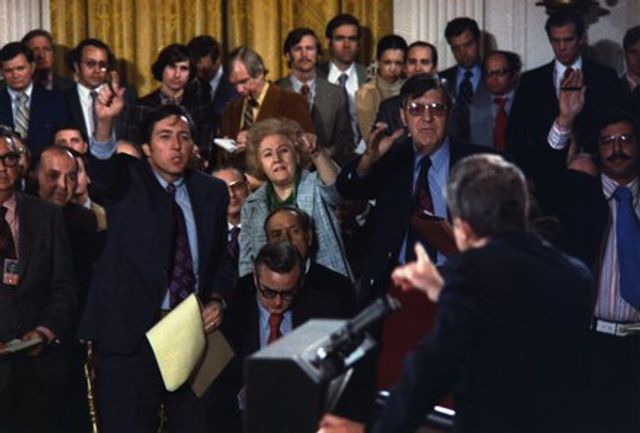 Nixon at a 1973 press conference

On February 2, 1970, US President Richard Nixon submitted his proposal to congress for the 1971 fiscal year. The $200.8 billion sum, while technically an increase from the previous year, was an effective spending cut after accounting for inflation. It was the first full-year budget Nixon would propose to Congress and was the first Republican budget since the Dwight D. Eisenhower administration (1953-1961).

Nixon claimed that the cuts in spending were intended to stem the effects of inflation. In his message to Congress he wrote, “This anti-inflationary budget begins the necessary process of re-ordering our national priorities. For the first time in two full decades, the Federal Government will spend more on human resource programs than on national defense.”

The proposed military spending, $71.8 billion, was in fact the beginning of a decline in the defense budget. Withdrawals of US troops from Vietnam had already begun and would continue over the next several years as part of Nixon’s strategy to gradually reduce the presence of US troops in the war. NASA was also hit with cuts of $500 million, causing the postponement of some space missions and the shutdown of research facilities. Other federally funded scientific research also took a 3 percent cut, factoring in inflation.

A particular target for cuts was education. One week before Nixon proposed his budget to Congress, he signed his first veto, killing legislation that would have provided $19.7 billion to education, with some money in the bill also going to healthcare and welfare programs. In an unusually arrogant move, Nixon televised the signing of the veto to a national audience. During the broadcast he also attempted to blame inflation, saying, “This action is in the vital interests of the American people in stopping the rise in the costs of living.” No new funds for education were provided for in Nixon’s budget, and in his statement to Congress he suggested that he would search for more areas to cut school spending.

The new budget did propose some increases in funding. There was a meager increase in welfare programs such as food stamps and some health services. However, the increase was mainly to keep funding rates the same when accounting for inflation, along with one new family assistance program. Most new funding went to infrastructure, with about $4 billion allocated to the construction and repair of highways, and another $4 billion provided for the creation of a national clean water program.

Also receiving an increase in funding was law enforcement, with an additional $1.3 billion, $600 million more than the increase in the 1970 fiscal year budget. Nixon claimed that the increase was to crack down on organized crime. In reality the funds would be used in police operations against the poorest working class areas.

75 years ago: American prisoners of war freed in the Philippines 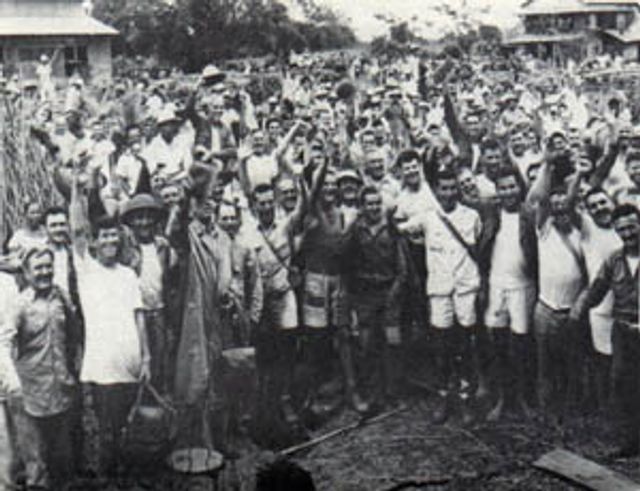 On January 30, 1945, almost 500 American prisoners of war were freed from a Japanese camp near Cabanatuan City in the Philippines, after a daring raid conducted by US army scouts, rangers and local guerilla units. The prisoners and those who had liberated them beat a hasty retreat behind American lines. Those who were freed included 464 American soldiers, 22 British troops, 3 Dutch soldiers and 33 civilians.

The rescue of the prisoners was a daring operation, planned after Japanese forces began mass executions of prisoners of war at other camps in the Philippines in the aftermath of the US invasion. The raid was preceded by reconnaissance operations behind enemy lines, led by Filipino guerilla fighters. In the early evening of January 30, a party of local fighters, along with US army rangers and scouts, surrounded the camp, before launching a surprise attack that overwhelmed Japanese guards. The speed of the assault meant that only one Japanese soldier was able to fire mortar rounds, before being overwhelmed.

The operation took place amid rapid gains in the campaign of American imperialism to regain the Philippines, its former colonial possession, and to establish primacy over Japan throughout the Asia-Pacific region.

US prisoners had been at the detention center since early 1942, when an initial American counterattack on Japanese positions in the Philippines had been roundly defeated. A force of some 72,000 US and allied Filipino military personnel had been forced to surrender after launching a bungled offensive characterized by insufficient supplies and munitions, poor planning, and widespread disease and illness among the ranks.

The prisoners were marched to Camp O’Donnell, a former US military installation on the island of Luzon. Some 52,000 survived the journey, comprised of around 9,000 American troops and more than 40,000 Filipino fighters. As many as 20,000 died on the 60-mile trek, many from disease. When Camp O’Donnell was later closed, the internment center near Cabanatuan City became the largest site of Allied prisoners in the country, holding over 10,000 at its height. Able-bodied prisoners were transported throughout Japanese-controlled Asia to perform forced labor. Those who were unable to travel were held in the rudimentary camp, in conditions that US authorities denounced as a violation of their rights.

The US launched an invasion of the Philippines in October 1944. The following month, it dispatched a naval armada to the archipelago, which engaged with its Japanese adversary in the largest sea-borne battles of World War II. Amid a crisis of the fascist regimes internationally, and widespread local hostility to the Japanese occupation, the US troops made rapid advances. 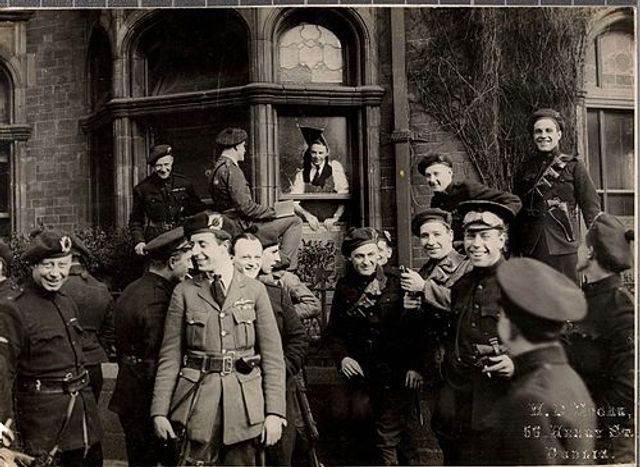 On January 31, 1920, units of the British Army and the Royal Irish Constabulary (RIC) arrested seven recently elected members of the Dublin City Council, all supporters of the Irish nationalist movement Sinn Fein, which advocated the independence of Ireland from the United Kingdom. On the previous day, Irish nationalist flags had been flown from the city council building. The British arrested another 18 Sinn Fein leaders throughout Ireland.

The nationalist Irish Republican Army had been fighting an insurgent war against the British since 1919, known as the Irish War of Independence. This included attacks on outposts of the RIC, primarily in the provinces. The War of Independence was also marked by strikes against key British-controlled infrastructure such as the railways.

The response of the British was to form a special terrorist unit of the RIC, comprised primarily of unemployed soldiers recruited from England and Scotland. Activated in January 1920, the units came to be known as the “Black and Tans” from the color of their uniforms. The Black and Tans conducted reprisals for IRA attacks, with the tacit approval of British authorities. These included the burning of houses, farms, and businesses of suspected nationalist sympathizers, as well as rape and extrajudicial killings.

The Black and Tans killed hundreds, and became notorious for acts of willful barbarism, such as burning down the cottages of small farmers—sometimes with the residents inside—and the destruction of factories, which put thousands out of work. The ferocious repression only produced a deep and abiding hatred of British imperialism in the Irish population, commemorated by the famous song, “Come out ye Black and Tans.”