Democratic Representative from New York Alexandria Ocasio-Cortez recently said in an interview with New York Magazine that she and former Vice President Joe Biden, one of the leading candidates for the Democratic presidential nomination in 2020, would be in different political parties in any other country. 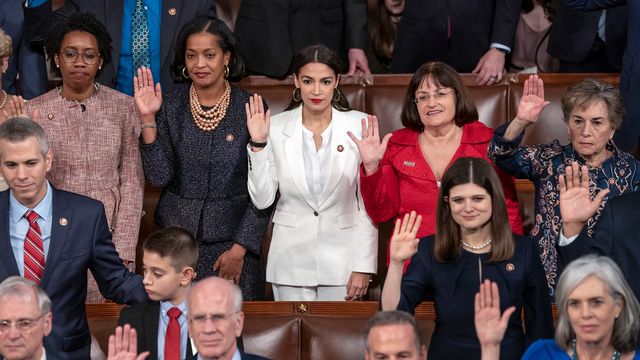 The comment came in response to a question about what role Ocasio-Cortez might play as a member of Congress should Biden win. She said in response, “In any other country, Joe Biden and I would not be in the same party, but in America, we are.”

Ocasio-Cortez added that the Democrats could be “too big of a tent” and criticized the Congressional Progressive Caucus’s standard for lawmakers. “They let anybody who the cat dragged in call themselves a progressive,” she stated, adding, “there’s no standard.”

The comments prompted a wide range of responses in the media. There were dozens of headlines touting (or lamenting) Ocasio-Cortez’s “radical left” agenda, with many agreeing that the two prominent Democrats should not, in fact, be in the same party.

Jacobin, the unofficial media voice of the Democratic Socialists of America (DSA), ran an article with the headline: “AOC Is Right: She and Joe Biden Should Not Be in the Same Party,” which outlined the supposed gulf between the politics of Biden and those of Ocasio-Cortez on numerous issues. Ocasio-Cortez is a member of the DSA, and Jacobin and the DSA regularly celebrate the congresswoman as the way forward for the socialist movement in the US.

Jacobin concludes: “She and Biden don’t belong in the same party. No party is big enough for the both of them.”

The obvious question is why, if Ocasio-Cortez’s political opinions are indeed so radically different from Biden’s, are they in the same party? Jacobin responds by attributing this to the particularly anti-democratic form of the American two-party system, with its restrictive ballot access laws and the absence of proportional representation.

In reality, Ocasio-Cortez, like Bernie Sanders, is playing a critical role that has long been assumed, in different forms, by supposedly “left” organizations and individuals within the Democratic Party: namely, channeling social tensions and opposition behind the oldest capitalist party in America.

There is the experience of the People’s Party and the presidential campaigns of William Jennings Bryan in the late 1890s, through which the populist movement was appropriated and smothered by the Democratic Party; the Farmer-Labor Party campaigns in the 1920s and 1930s in the upper-Midwest, which were absorbed by the Democrats; the Jesse Jackson campaigns in the 1980s; and most recently the campaigns of figures like Dennis Kucinich and Sanders—all of whom served in one form or another to contain social opposition within the framework of the Democratic Party and the capitalist two-party system.

The DSA itself, from its inception, has existed as an auxiliary arm of the Democratic Party, with no serious pretense to independence. The predecessor organization of the DSA, the Democratic Socialist Organizing Committee (DSOC), emerged out of a split within the Socialist Party of America in 1972. Michael Harrington was the founder of both the DSA in 1982 and its predecessor organization, the DSOC.

Harrington’s early political training came in the 1950s as a leader of the Young Socialist League, the youth organization of the Independent Socialist League, led by Max Shachtman. Shachtman had split from the Socialist Workers Party, the pioneer party of American Trotskyism, in 1940, leading a petty-bourgeois opposition opposed to the defense of the Soviet Union against imperialism.

By 1950, the Shachtmanites were defending US intervention in the Korean War. In 1961, soon after merging his organization with the US Socialist Party, Shachtman supported the Bay of Pigs invasion of Cuba. He soon was defending imperialist war crimes in Vietnam.

Harrington broke with Shachtman over the latter’s vociferous support for the Vietnam War in the early 1970s. His criticisms were not based on principled opposition to imperialism, however, but rather on the view, shared by most sections of the Democratic Party, that the war was unwinnable and was undermining the interests of American capitalism.

Both Shachtman and Harrington, despite their political differences, sought to keep the working class tied to the Democrats. They attached themselves to different wings of this party of imperialist reaction.

Shachtman had become a top adviser to AFL-CIO President George Meany and to the most right-wing war hawks among the Democrats. Harrington was close to other sections of the trade union bureaucracy, and to the wing of the Democrats supporting George McGovern, the party’s presidential candidate in 1972. The McGovern campaign played a critical role in the reorientation of the Democratic Party, abandoning all pretense of defending the working class and instead basing itself on privileged layers of the middle class on the basis of the politics of race, gender and sexual orientation.

The first issue of Democratic Left, the flagship publication of the DSOC, laid out its orientation: to “build a progressive majority for the Democratic Party in 1974 and 1976.” In a prominent editorial in the same edition, Harrington explained the function of the newly founded group: “We believe that the left wing of realism is today found in the Democratic Party. It is there that the mass forces for social change are assembled; it is there that the possibility exists for creating a new first party in America.”

The time period when Harrington was drawing the conclusion that the Democratic Party was the way forward for socialists and “social change” is of particular significance. American capitalism was entering a period of protracted economic decline. The Vietnam War spelled the end of the “Great Society” and the “War on Poverty.” By the late 1960s, the postwar boom had begun to unravel and the policies of the Democratic Party underwent a shift to the right. The ruling class was preparing to launch a social counterrevolution, beginning the process of tearing up all the gains workers had won in an earlier period.

Further on in the same commentary, Harrington added: “We do not want to purge the New Politics from the Democratic Party; we choose, rather, to help bring out its best potential.”

The “New Politics” to which Harrington referred was a reflection of the Democratic Party’s attempt to absorb middle class elements emerging from the movement against the Vietnam War. None other than President Richard Nixon adopted a similar strategy after 1968 with his embrace of “black capitalism,” a program that included policies such as affirmative action and racial quotas aimed at promoting a layer of black businessmen and politicians who then helped preside over an immense increase in social inequality.

Harrington articulated the views of a broad layer of 1960s radicals who were moving to the right. They had abandoned any conception, to the extent they ever had one, of socialism based on the working class. This layer did not want to be burdened by any principles, socialist or otherwise, that stood in the way of their entry into the upper-middle class.

The role of Ocasio-Cortez

The four decades since the founding of the DSA have seen an unbroken movement to the right on the part of the ruling class as a whole, and the Democratic Party in particular. The Democrats long ago rejected any association with social reform. Under the Obama administration (2009-2017), the Democrats oversaw the biggest redistribution of wealth from the working class to the rich in US history.

There is mass popular opposition to inequality and war, which has erupted in the form of demonstrations and strikes throughout the world, along with a growing political radicalization of young people. More and more, young people are identifying themselves as socialists.

The emergence of Ocasio-Cortez is completely in line with the traditional role of the Democratic Party as an instrument of the ruling class to capture and strangle popular opposition to capitalism. She herself is not the head of a mass movement that the Democratic Party is working to co-opt. She is rather the product of maneuvers by the DSA, operating inside the Democratic Party, to preempt the popular support for socialism that was revealed in 2016 in the 13 million votes for Bernie Sanders in the Democratic presidential primaries.

Sanders, who calls himself a “democratic socialist,” is a long-time functionary for the Democratic Party. He ran as the supposed opponent of the “billionaire class” and champion of a “political revolution,” which turned out to be a campaign to hustle votes for Hillary Clinton, the candidate of Wall Street and the political establishment.

Ocasio-Cortez’s marching orders are to keep the growing opposition in the working class within the safe confines of the two-party system. Neither Ocasio-Cortez nor Sanders has anything to do with a genuine movement for socialism, which must be based in the working class and guided by a program to mobilize workers on an international basis against world capitalism. In her brief tenure in Congress, Ocasio-Cortez has already demonstrated that her politics are entirely compatible with those of the Democratic Party establishment.

She has fully accepted the Democrats’ anti-Russia campaign and the right-wing, pro-war basis of their impeachment proceedings against Trump. She has dropped her demand to abolish ICE, which is spearheading Trump’s war on immigrants, and cultivated a close relationship with House Speaker Nancy Pelosi.

She has been silent on the persecution of Julian Assange and Chelsea Manning and the associated attack on free speech, as well as the illegal military violence, mass spying and record deportations carried out by the Obama administration.

She, along with Sanders, joined in the disgusting chorus of praise for arch-warmonger John McCain following the Arizona senator’s death, tweeting: “John McCain’s legacy represents an unparalleled example of human decency.” (See “Ocasio-Cortez and Sanders praise McCain: An object lesson in the politics of the pseudo-left”)

Her signature legislation, the “Green New Deal,” was put forward as a non-binding resolution. It features left-sounding rhetoric but has zero significance in terms of resolving the global warming crisis. It promotes the fiction that it is possible to avert an environmental catastrophe within the framework of capitalism and the Democratic Party.

At the end of the day, Biden and Ocasio-Cortez agree on all of the fundamental points that define the Democratic Party: support for imperialist war, which requires attacks on democratic rights and social programs; American nationalism and defense of the nation-state framework, which means attacks on immigrants and a buildup of police state repression; and the defense of capitalist ownership of the means of production, the source of the social evils that Biden and Ocasio-Cortez claim to oppose.

Ocasio-Cortez has moved steadily away from any association with the term “socialism.” In a particularly revealing interview with NBC News’ Chuck Todd last year, she was asked if one could be a socialist and capitalist at the same time. Ocasio-Cortez replied that she thought it was “possible.”

The working class has been repeatedly sold the same bill of goods about reforming the Democratic Party for more than a century. Ocasio-Cortez and the DSA are hoping they can pull off this political swindle one more time.

As the new decade opens, the working class is facing enormous political dangers: the threat of a third world war, the rise of fascism, a looming ecological catastrophe, and the further destruction of jobs and social services. At the same time, strikes and protests against social inequality and attacks on democratic rights are taking place on virtually every continent. The growing international movement against capitalism shows the potential for a revolutionary socialist alternative.

The critical question is the building of a revolutionary leadership, which requires the rejection and defeat of all those, such as Ocasio-Cortez and the DSA, who seek to trap working people within the confines of capitalist politics.