The 62nd annual Grammy Awards ceremony was held on Sunday in Los Angeles. The event, hosted by the Recording Academy, is the most prominent such ceremony in the music business in the US. Grammys are handed out to musicians, singers, producers, engineers and songwriters. The live broadcast generally draws about 20 million television viewers on average, though that number represents a sharp decline from peak viewership in the 1970s and ’80s.

This year’s event was held in an atmosphere of squalid #MeToo-style accusations and infighting among the Recording Academy’s top officials, and amid a strenuous overall effort to orient the event (and the music world) toward identity politics.

On January 16, Deborah Dugan, the president and CEO of the Recording Academy, was placed on “administrative leave” in the face of undisclosed allegations of “misconduct” toward another female employee. A week later Dugan filed a discrimination complaint with the Equal Employment Opportunity Commission (EEOC) against the Academy, alleging sexual harassment by the organization’s chief legal counsel Joel Katz, and multiple claims of corruption against the organization, including the rigging of the voting process for award nominations. Dugan’s claim also asserts that she was informed by the Board of Trustees that Neil Portnow, whom she replaced as CEO in 2018, was previously accused of rape by an unnamed female artist.

Several additional claims and counterclaims have since emerged. Dugan’s complaint includes an outline of “gender discrimination” against her and other women, a “culture” of racial discrimination and inappropriate influence on various nominations.

Struggles over money and powerful positions appear to loom large, according to the initial reports. The unnamed woman accusing Dugan of “abuse”—a former assistant to Portnow—was allegedly dismissed in November 2019. Dugan claims the woman was pressured by the Academy Board to help bring her down, after she began challenging the “male-dominated leadership.” Dugan claims the actions against her escalated after she refused to hire Portnow as a consultant for $750,000 a year and when she attempted to challenge the exorbitant $250,000 retainer fees for figures like Katz.

The Academy Board, on the other hand, alleges that Dugan demanded $22 million as a buyout in return for stepping down after the claims of alleged “bullying” were raised. The Portnow rape allegation—which he has denied in a statement, and in regard to which no charges have been brought—was apparently made known to Dugan before she agreed to become CEO and President, and she did not raise anything about it until this past week.

At least a half dozen accusations of various kinds are raised in Dugan’s complaint to the EEOC. All sides thus far deny the allegations of the various forms of “misconduct” they are alleged to have committed.

Much of the rotten character of the #MeToo campaign—which has nothing to do with the conditions of working women and involves the jockeying for power and money within upper-middle-class layers—emerges in the sordid infighting.

Portnow came under fire by artists and activist groups when he responded to complaints of a lack of female winners and presenters at the 2018 Grammy awards by asserting that “women need to step up.” He was eventually forced to resign, and Dugan was brought on in early 2019.

The Academy created a task force in 2018 to take up the complaints, headed by Tina Tchen, a former chief of staff to Michelle Obama and organizer of the #MeToo-based Time’s Up legal fund. (Obama, incidentally, won for Best Spoken Word Album this year for her audio biography Becoming. She was also part of the opening ceremony in 2019). The task force concluded that there was an “overwhelming lack of diversity and inclusion” in the membership, among other things, prescribed “solutions” which are now being implemented in the gender-themed ceremonies, performances and positions. The subsequent two Grammy Award shows have been largely dominated by a focus on gender, race, sexual orientation and careerism.

As for the actual 2020 Grammys, it largely continued along self-absorbed lines. Very little of the outside world, or even the sordid infighting among the Academy’s executives, interfered with the evening. As we pointed out last year, one quickly gets the sense there is a lot of money at risk if one sticks one’s neck out. The proceedings have a great deal to do with self-promotion, which in part may explain why fewer and fewer people tune in.

The Grammys have always been considered a marketing tool for the large music recording firms. Currently, about 90 percent of the music market is controlled by four major companies—Universal Music Group, Sony Music, Warner Music and the EMI Group. Most of the artists up for the 84 awards on Sunday are connected to one of these companies, or one of their subsidiaries. Winners can count on lucrative record deals, advanced promotion and so forth.

Sunday’s event was again hosted by singer-pianist Alicia Keys, a talented musician, but selected no doubt for her general complacency, as well as her fealty to the music industry and the Democratic Party. 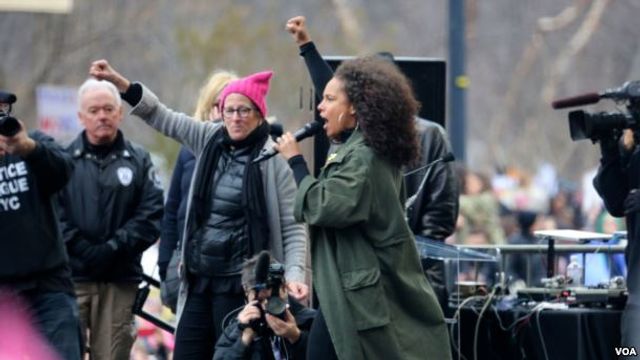 Alicia Keys at the Women’s March in 2017

Her opening monologue—setting the tone for the evening—was tedious and bland, careful not to address anything too serious, unquestioning in regard to identity politics and mixing in lavish praise of the audience. Additional comments and musical pieces throughout the evening by Keys continued in this general vein.

“We want to be respected, and safe, in our diversity,” she opened. “We want to be shifting to realness and inclusivity. So tonight, we want to celebrate the people. The artists that put themselves on the line and share their truth with us.” Later, in the closest she got to political commentary, she opined that should Donald Trump be impeached, he would be best replaced by rapper Cardi B, whose biggest single, “Bodak Yellow,” as we remarked in 2017, is a vulgar and anti-social “feminist anthem.”

Needless to say, virtually no “truthful” or “real”—and certainly no oppositional—moments emerged over the next three hours. 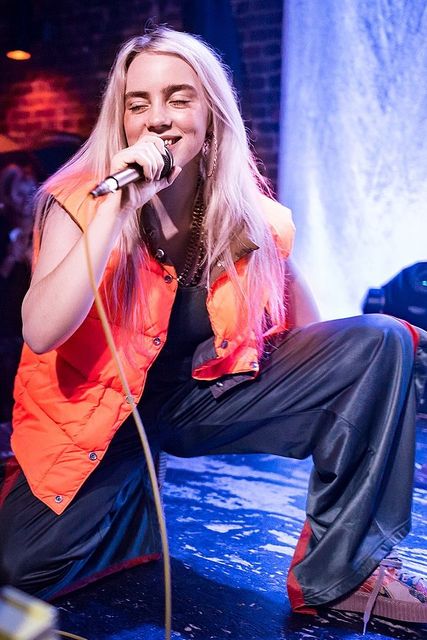 The main winner of the evening was 18-year-old artist Billie Eilish. With her producer brother Finneas O’Connell, they won Album of the Year (When We All Fall Asleep, Where Do We Go?), Record of the Year, Best New Artist, Best Pop Vocal Album, Producer of the Year and Song of the Year for “Bad Guy.”

The music of Eilish is unusual, largely centered on minimal electronic production and influenced by something called ASMR (autonomous sensory meridian response). The latter emphasizes subtle, whisper-like vocals and other similar forms of auditory stimuli. Eilish’s music has a broad appeal among young people.

But whatever invigorating qualities may exist in Eilish’s music, the lyrics and outlook are quite limited and bleak. The hit song “Bad Guy,” for instance, is slight stuff. “I’m that bad type/ Make your mama sad type/ Make your girlfriend mad tight/ Might seduce your dad type/ I’m the bad guy, duh” goes the refrain. The songs tend to be very dark and ironic, accompanied by videos that are unsettling. This was the best popular music had to offer, according to the Grammys. 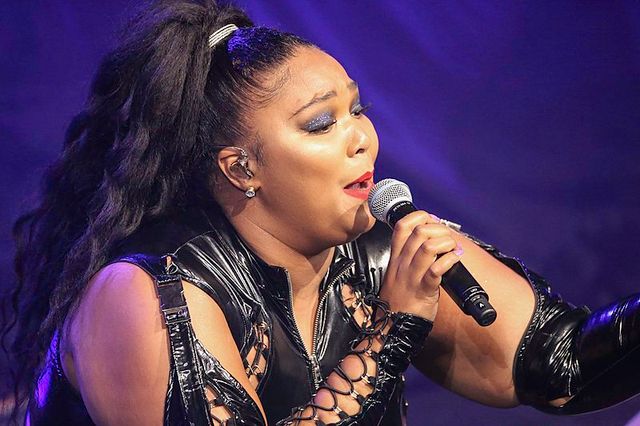 Much of it is a slightly new approach to tired old material and themes: money worship, “self-empowerment” and “self-care,” but also self-loathing, ironic sentiment, relationship woes and so forth. There are always a few exceptions, but they are few and far between, and generally buried in the proceedings.

None of the great issues driving events and dominating the thinking of millions of people—endless war and the threat of wider wars, vast social inequality, the specter of fascism and a pervasive social crisis—were on display in the music or referred to in the speeches on Sunday. Anyone dropped into the event by time machine to learn something about the world in early 2020 would gain little more than a sense of the personal satisfaction of the award recipients at winning, along with the sadness generated by the death of basketball star Kobe Bryant.

The lack of anything genuinely moving or oppositional at the event was not because of a lack of talent or serious artistic ability of those in attendance. There were certainly many talented figures, young and old, at the ceremony or in the nominations—among them Stevie Wonder, Smokey Robinson, John Prine, Bonnie Raitt, Elvis Costello, Brandi Carlile, Willie Nelson and dozens of others, including some of the winners.

Where artists focused more on honoring other artists or individuals, their sincerity and commitment were evident. Tributes to Prince, John Prine and Bryant were highlights in this regard.

But all told, it was a largely forgettable event.