On Wednesday, hundreds of thousands of workers and youth marched in protests across France in a further “National Day of Action” against President Emmanuel Macron’s widely opposed pension cuts. Anger is still building against Macron, even after rail and transit workers, starved of strike pay by the union bureaucracies, were forced to end their six-week strike and return to work last week. 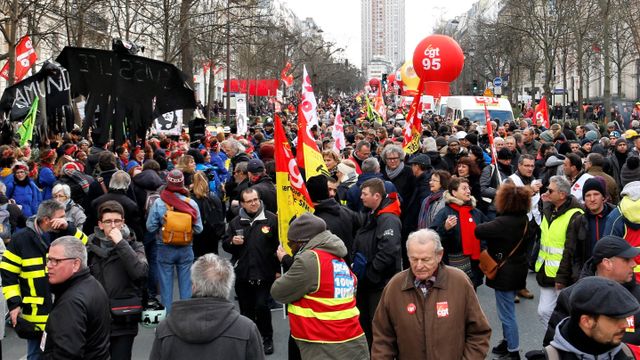 The demonstrations were large, though figures released by both the police and the trade unions indicated a somewhat smaller participation than the previous protest, on January 24. According to the unions, 35,000 protesters marched in Toulouse, 10,000 in Bordeaux and 7,000 in Le Havre. The police claimed there were 3,500 in Lyon and 4,500 in Marseille. 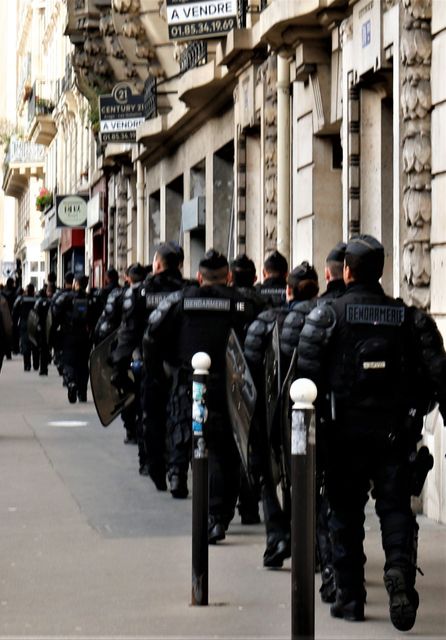 Armored riot police kettle a section of the protest

In Paris, police arrested 13 demonstrators when clashes broke out at a march attended by 180,000 people, according to trade union estimates.

Amid a global upsurge of working-class struggles, including mass protests in Iraq, Algeria and across Latin America, strikes of teachers and copper miners in America, and mass strikes by tens of millions of workers in India, strikes continue to break out in France. Workers at Paris garbage incineration facilities, employees operating ferries connecting Marseille to Corsica, and sewer-cleaning workers across France took strike action against Macron’s cuts yesterday.

The principal feature of these protests is the class gulf separating the workers from the trade union bureaucracies and allied petty-bourgeois parties such as Jean-Luc Mélenchon’s Unsubmissive France (LFI) party. Among workers there is a broad sense that there is nothing to negotiate with Macron and the only way forward is a fight to bring down the Macron government. 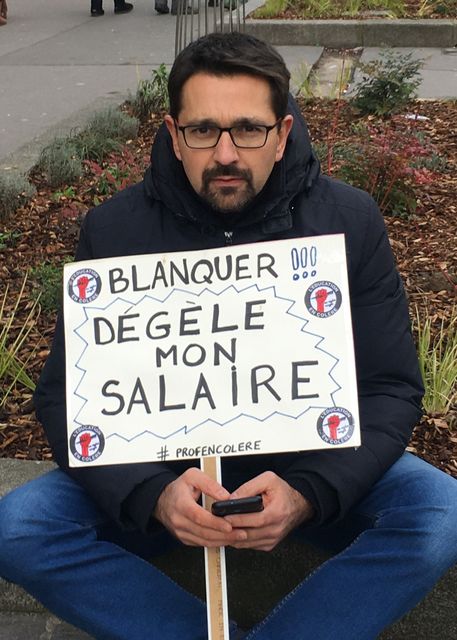 The unions, however, are negotiating the cuts with Macron. Even as they are underfunding striking workers and dividing and breaking up strikes, they are sitting down to discuss the smashing of France’s pension system with Macron.

Philippe Martinez, the head of the Stalinist General Confederation of Labor (CGT) union, said yesterday he would join a planned four-month negotiating session on the cuts initially agreed with the openly pro-Macron and pro-pension cut French Democratic Labor Confederation (CFDT).

“It’s very hard to know what will happen,” Martinez cynically declared, speaking of the conference with the CFDT and Prime Minister Edouard Philippe at the Economic, Social and Environmental Council (CESE), where the unions work out social policy with the state and business groups. “We have just agreed to meet at the CESE. What will happen, who will be there? We have no idea.” 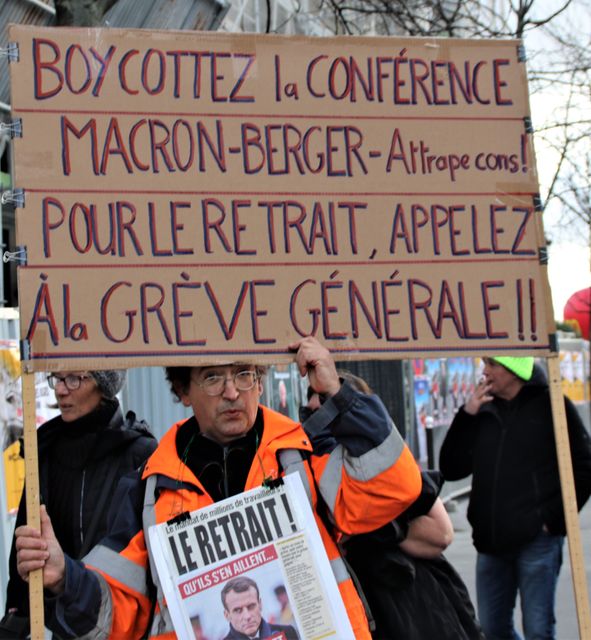 “Boycott the Macron-CFDT conference, it's a trap. To end the cuts call a general strike”

This is a fraud. The aim is to mask the CGT bureaucracy’s treachery and coordination with Macron. It is not hard to see what will happen at the CESE.

Philippe called the conference to break the momentum of strikes last month. Based on rejecting any move to tax the obscene wealth of France’s billionaires, Macron’s LRM party and the CFDT will discuss state budget deficits, claim there is no money, and demand that the cuts be adopted as a matter of economic necessity.

As for Martinez’s calls for Macron to increase wages and pensions, they are politically absurd. He might as well propose that Macron hand out free champagne and caviar to all strikers. Macron and Philippe would dismiss such proposals out of hand, and Martinez doubtless knows well enough not to raise them seriously behind closed doors at the CESE. 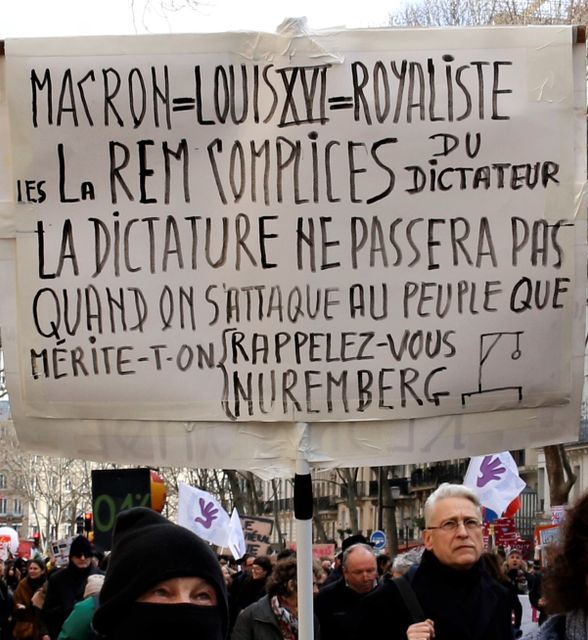 “Macron, King Louis XVI, royalist, his party is complicit. Dictatorship will not be tolerated. What do you deserve when you attack the people. Remember the Nuremberg trials”

The frustration among workers over the reactionary antics of the unions and the pseudo-left erupted at yesterday’s protest, as workers confronted Mélenchon. One told Mélenchon that he should come out and support strikers more, to which LFI politician Eric Coquerel replied that Mélenchon is “everywhere.” When the protester said that he sees Mélenchon only “on TV shows,” Mélenchon sneered, “Come on, go see your mother” and walked off.

Such events underscore the critical importance of the call, made by the Parti de l’égalité socialiste and the WSWS, for workers to build rank-and-file action committees, independent of the unions, to fight to bring down Macron. Workers must be warned that the unions are moving to sabotage and betray the strike movement against Macron. They must act consciously to take the struggle out of the hands of the union bureaucracy and its political allies and fight to draw broader layers of workers in France and internationally into the fight.

Alain, a “yellow vest” and retired bus driver attending yesterday’s protest in Paris, told the WSWS that Macron’s reform was “looting the people,” with pension cuts amounting to hundreds of euros monthly, or more. He added, “Now the unionized workers are starting to understand how the unions work. It’s not pretty. They work with the government and eat at the same trough. It’s a catastrophe, the CFDT is the worst but the CGT is not much better.” 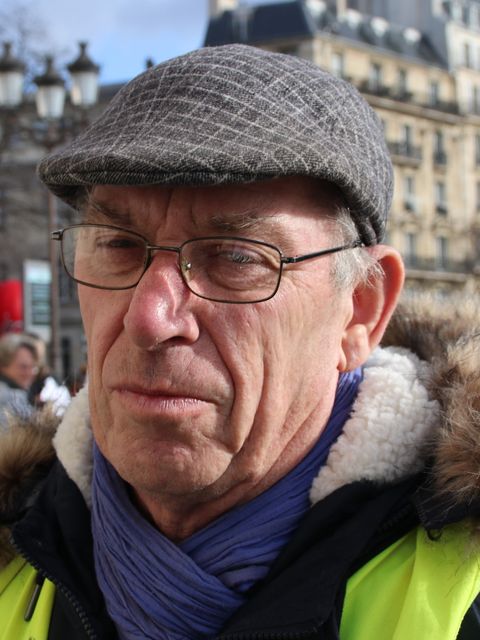 As a result, Alain added, even though “in every country the people are rising up against a sort of new world order,” in France “many more people should have been out protesting.” He added, “I think then this government would not last long.” 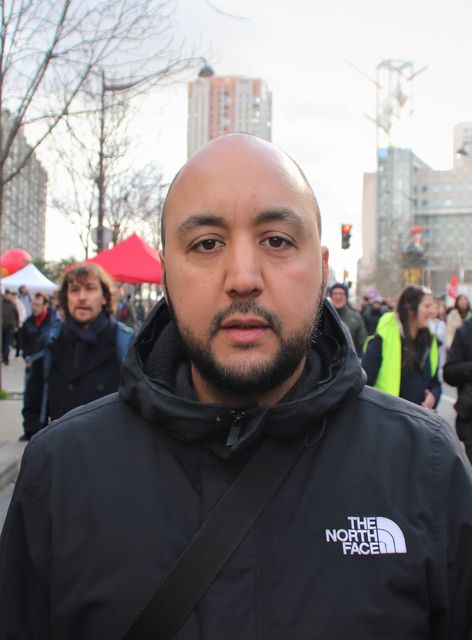 Salim, a RATP (Paris mass transit) worker, told the WSWS that he had returned to work out of economic necessity, as his wages and savings had run out. He added that he is following mass protests by workers in the Middle East and around the world. “We must feel solidarity with them,” he said, “because the wealth produced by the workers everywhere is being harvested by the bosses and big capital.”

As protests began yesterday morning, news was spreading of violent clashes that erupted Tuesday between the government’s Republican Security Companies (CRS) riot police and firefighters protesting Macron’s cuts. With tensions high after a CRS cop shot a firefighter’s eye out with a rubber bullet at a protest last autumn, thousands of firefighters arrived in Paris in full fire-proof emergency gear, defying orders not to wear protective clothing to protests.

The firefighters’ heavy clothes and gas masks provided good protection from tear gas, and a running battle between firefighters and CRS units ensued in Paris as firefighters tried to reach the circular highway around the city to disrupt traffic.

Videos show how firefighters repelled an initial CRS baton charge, broke the CRS line and seized their plexiglass riot shields. Keeping close to retreating CRS police to limit their ability to fire rubber bullets and stun grenades, they chanted the call to arms from the Marseillaise, France’s national anthem. The CRS deployed truck-mounted metal barriers to halt the firefighters’ march, firing stun grenades and water cannon to protect the barrier, and then illegally shot a potentially lethal rubber bullet to the head of a firefighter who climbed onto the water cannon to wave a flare.

Firefighters pried apart several of the panels in the truck-mounted barrier, breaking it open, and shouted at the riot police, calling them “traitors to the French nation” and “Nazi collaborationists” for not defying Macron’s orders to attack demonstrators.

Created in December 1944, after the fall of the Nazi-collaborationist Vichy regime in World War II, the CRS were initially a new name given by General Charles de Gaulle’s government to Vichy’s Mobile Reserve Group (GMR) units. The renaming aimed to hide the record of the fascist GMR, which fought alongside Nazi SS troops against Resistance units. This led to the famous slogan, used first in the bloody 1947 miners’ strike and then the May 1968 French general strike: “CRS-SS.”

The Paris police prefecture issued a statement denouncing the “exactions” allegedly committed by the firefighters. Police officials claimed that 160 CRS were wounded in Tuesday’s clashes with the firefighters, including some with leg wounds from explosives—possibly police stun grenades kicked back at CRS lines.

Once again, the unions moved to divide and strangle the mobilization of the working class. After the government announced that it would make concessions to the firefighters, offering guarantees that they would not be affected by pension cuts targeting the rest of the working class, the firefighters’ unions announced they would call off the strikes.