The emergence of John Bolton, a leading architect of the Iraq war, as the central figure in the Democrats’ impeachment drive has made clear, once again, that the conflict within the state centers on divisions over foreign policy between two right-wing factions of the US ruling class. 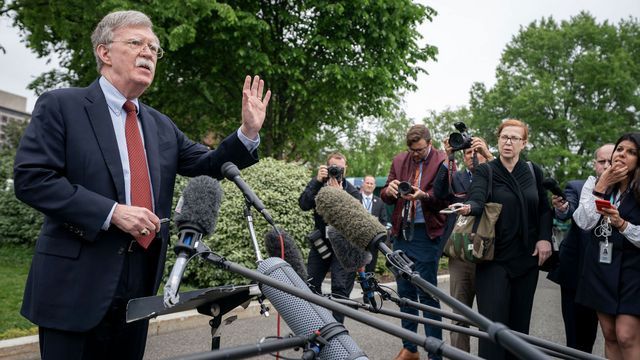 On Sunday, the New York Times reported that a forthcoming book authored by Bolton alleges that Trump demanded that Ukraine investigate former Vice President Joe Biden and his son, Hunter, as a condition for receiving military aid. The central focus of the House impeachment managers since then has been to press the demand that the Senate agree to hear new witnesses, beginning with Bolton.

John Bolton is a war criminal. He was a leading architect of the Iraq war, who shamelessly made false claims about Iraq’s “weapons of mass destruction” to start a war that killed over one million people. He has both participated in, and publicly advocated, the launching of countless wars, with disastrous human consequences.

While in office as Trump’s national security advisor, Bolton stated that the United States is considering the “Libya model” in its dealings with North Korea, referencing the lynching of Libyan President Muammar Gaddafi by US-backed Islamist forces.

The fact that Bolton is being held up as the leading figure in the Democrats’ opposition to Trump makes clear that their opposition to Trump is based not on the president’s real crimes—his human rights abuses on the border, his assertion of dictatorial powers, and his appeals to fascistic forces—but on allegations that he is insufficiently aggressive in confronting Russia.

On Wednesday, Representative Eliot Engel, chairman of the House Foreign Affairs Committee, revealed that Bolton had called him on September 23, 2019, urging that his committee look into the firing of Marie Yovanovitch, the US ambassador to Ukraine, and suggesting that it was improper.

The timing is key: Bolton called the influential Democrat less than two weeks after his acrimonious departure from the White House, and the same day that seven House Democrats with military-intelligence backgrounds published an op-ed in the Washington Post calling for an investigation of Trump for the withholding of military aid to Ukraine. The next day, House Speaker Nancy Pelosi announced the start of the impeachment inquiry.

There are suggestions in the press, as yet unsubstantiated, that Bolton began his anti-Trump operations even before he left the White House, in response to disagreements over Iran, Ukraine, and other areas where he advocated a more bellicose policy than the president.

Engel was a logical point of contact for Bolton within the Democratic Party. He has a long and thoroughly right-wing foreign policy record, particularly on the Middle East. The New York congressman is one of the most fervent supporters of Israeli oppression of the Palestinians. He voted to authorize the war in Iraq, opposed the Iran nuclear deal negotiated under the Obama administration, and, when Trump threatened last summer to fire missiles on Iran, said that no congressional vote was needed to authorize such action because “we don’t need to tie the president’s hands.”

In Wednesday’s session of the trial, devoted to eight hours of questions submitted alternately by Republicans and Democrats, the first three questions from the Democrats raised the subject of Bolton and the demand for more eyewitness testimony about the Ukraine aid decision. The Democrats returned to the issue repeatedly, while the Senate Republicans and Trump’s attorneys fought a rearguard action, hoping to prevent the defection of four Republicans in Friday’s vote on whether to call witnesses.

Trump denounced Bolton in a series of tweets, claiming, “[I]f I listened to him, we would be in World War Six by now.” This was a cynical attempt to use Bolton’s warmongering record to strike a false pose of opposition to war, despite Trump’s embrace of militarism and a foreign policy based on bullying threats of violence.

In reality, all factions of the US ruling elite support pouring trillions of dollars into the military in preparation for global war. Their differences are tactical: which country to strike first, and when, and on what pretext, with the Democrats targeting Syria and Russia and Trump focused more on Iran and China.

But Trump’s main response to impeachment and Bolton’s public alignment with the Democrats has been the elevation of executive authority above that of Congress, combined with ever more violent and inflammatory rhetoric, particularly at campaign rallies, seeking to whip up an atmosphere of violence and intimidation directed against his political opponents.

The White House sent a letter to Bolton’s attorney threatening to block publication of his book, claiming that it contained extensive classified information that had to be removed. The transparent purpose was to use bogus “national security” concerns to silence Bolton long enough to bring an end to the Senate trial and allow Trump to declare himself vindicated.

The substance of the case presented by Trump’s lawyers Monday and Tuesday was to declare the president exempt from any check on his authority by Congress. Adjusting to the impact of Bolton’s account, the attorneys put forward the argument that even if Trump had withheld aid to force a political favor from Ukraine, that was not an impeachable offense.

The most flagrantly authoritarian argument came from Harvard Professor Alan Dershowitz, who claimed that “abuse of power,” and “obstruction of Congress” are not impeachable offenses. By that logic, the articles of impeachment that led to Richard Nixon resigning the presidency in the Watergate scandal—for abuse of power, contempt of Congress, and obstruction of justice—were illegitimate and unconstitutional.

While on the floor of the Senate, Trump’s attorneys and Republican legislators push the theory of the president as an elected tyrant, subject to no legal constraint, Trump himself travels to campaign events in which he engages in racist, demagogic and fascistic incitement against “socialists” and “far-left radicals.”

On Tuesday night in Wildwood, New Jersey, Trump ranted against immigrants, hailed the violence perpetrated against them by agents of Immigration and Customs Enforcement, and vilified the Democrats as socialists and traitors. He will continue this campaign with rallies in Des Moines just before the Iowa caucuses and in Manchester, New Hampshire just before that state’s primary, in a transparent effort to intimidate voters—although the effect is likely to be the opposite.

There is vast and growing hostility to the Trump administration, and, more broadly, the program of social counterrevolution, attacks on democratic rights and war that the entire ruling elite and both of its political parties are pursuing.

The central issue facing working people and young people is to recognize that neither faction in the current political infighting represents anything progressive or democratic. Both factions defend the capitalist financial aristocracy and American imperialism.

The working class must break free of the political straitjacket of the corporate-controlled two-party system and build a mass independent political movement for socialism.

The 2020 SEP US Election Campaign