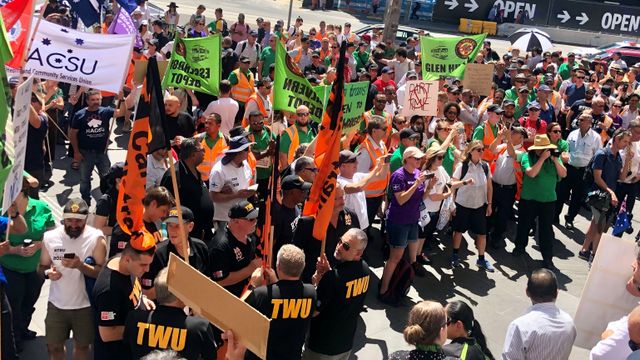 The RTBU rally in Melbourne

The industrial action marks the fifth shutdown of Melbourne’s tram system, the world’s largest operational network, in 2019–2020. The strikes are part of protracted negotiations for a new industrial agreement.

The company is also demanding that the current cap of 4 percent part-time drivers be ratcheted higher, as a means of slashing overtime and penalty rates for full-time drivers and boosting its profits by tens of millions of dollars. Yarra Trams initially demanded a 35 percent part-time workforce before lowering this to 15 percent. 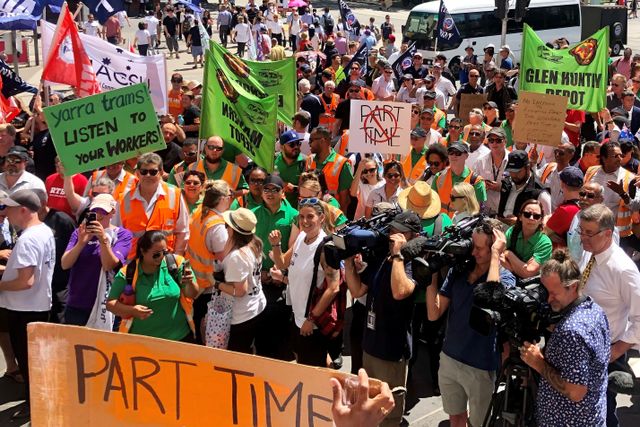 A section of the crowd at the protest in Melbourne

The tram workers have shown their determination to resist this attack on their wages and conditions. They have repeatedly voted down Yarra Trams’ proposed agreements, authorised industrial action through overwhelming majority ballots, and taken strike action on five occasions. The RTBU, however, has done everything within its power to isolate the tram drivers and subordinate them to both the state Labor government in Victoria and the anti-democratic Fair Work industrial regime.

The union bureaucracy has divided the tram workers from their colleagues working for the regional V/Line network and the Melbourne Metro Trains lines. Train drivers, who are also covered by the RTBU, are locked in stalemated negotiations for new industrial agreements and are confronted with near-identical demands for greater workforce “flexibility” and other concessions. Despite this, the union has erected Chinese walls between the three sections of transport workers, with not a single combined strike, demonstration, or even meeting of the regional and metropolitan train and tram workers.

Yesterday, V/Line workers went on strike for 24 hours on the Geelong-Warrnambool lines, and will strike again on February 7 on the Bendigo and Swan Hill lines. The state government-owned train operator has offered a miserly 2 percent annual salary increase, a real wage cut.

In the aftermath of this ruling, the RTBU has attempted to shut down the train drivers’ fight. An anonymous “public transport worker” reported, in an article published by the pseudo-left group Socialist Action (formerly Socialist Party, affiliated with the Committee for a Workers’ International): “In meetings with activists after the [Federal Court] decision, RTBU officials tested the mood by softly suggesting that perhaps we should just accept the bosses’ demands. […] The union leaders suggested that some members were ‘greedy’ and might be bought off by a pay increase. The officials also focused on the less-than-ideal turnout at some union meetings and suggested that the mood for struggle is low.”

If fewer train drivers are now attending union meetings, this reflects growing suspicion and antipathy towards the bureaucracy rather than a low “mood for struggle.”

According to recent media reports, around 50 Metro Trains drivers have been stood down in recent days pending management investigations, after they refused to operate trains along a new section of track over safety concerns. Metro Trains showed drivers a 10-minute video, simulating conditions on the new track between South Yarra and Hawksburn stations, instead of allowing the usual practice of first-time drivers on a new track being joined by an experienced colleague in order to gauge the line and signals.

In refusing to drive on the new track without proper preparation, the drivers have courageously defied the Fair Work Commission, whose deputy president Val Gostencnik ruled last Sunday that Metro Trains’ 10-minute video was sufficient and that workers could not legally refuse to drive on the new line.

In an extraordinary demonstration of contempt for these now victimised workers, none of the seven union officials who spoke at yesterday’s rally outside Melbourne’s Flinders Street train station even once mentioned the issue. A procession of bureaucrats from the RTBU, Victorian Trades Hall, and the Transport Workers Union said nothing about the fight by either Metro Trains or V/Line workers for a new industrial agreement.

The entire affair was carefully stage managed. One tram driver explained to the World Socialist Web Site that the workers had been given strict instructions by union officials not to speak with anyone at the rally, directing all inquiries to the bureaucracy.

Union speakers engaged in empty demagogy about fighting Yarra Trams until its demands for greater part-time labour were defeated. At the same time, the RTBU promoted reactionary nationalism, distributing several Australian flags to tram workers at the demonstration and complaining that profits from the privatised network had ended up in other countries.

An especially foul anti-French sentiment was promoted, on the basis of French company Keolis’s part-ownership of Yarra Trams. Some of the union-printed banners featured a picture of Napoleon Bonaparte holding bags of cash, with the caption, “Stop Multinational Corporate Greed.”

Secretary of the RTBU’s Tram and Bus Division Tarik Koç declared: “We will not allow them [Yarra Trams managers] to destroy our culture and our industry. If they’re not comfortable with the way it is, they can piss off back to France.”

The unions yesterday made no mention of the recently concluded six-week rail and mass transit workers strike against the administration of Emmanuel Macron, the longest continuous strike in France since the 1968 general strike.

The RTBU’s central focus throughout the tram and train drivers’ disputes in Melbourne has been to encourage the state Labor government of Premier Daniel Andrews to intervene and impose a rotten “compromise” deal that will entrench the union’s position in the industry—while doing nothing to secure decent workers’ wages and conditions.

At yesterday’s rally, the bureaucracy painted the state Labor government—which lies behind the assault on tram and train drivers—in the brightest colours. The RTBU’s women’s officer, Kathryn Breakwell, declared that in last state election, “workers voted for a blue collar government who would have the backbone to protect workers’ livelihoods and support us for safer working conditions.”

The problem, as far as the union is concerned, is the reluctance of Transport Minister Melissa Horne to intervene. Numerous union banners declared her “missing in action,” while RTBU official Mario Mizzi declared that the minister was “in a coma.”

The RTBU is collaborating with the Labor government to inflict a serious defeat on tram and train drivers across Victoria. In order to break out of the straitjacket that the bureaucracy has imposed, public transport workers need to take the struggle into their own hands. This would mean the formation of rank-and-file committees in every depot and station that will develop the maximum unity of tram drivers and metropolitan and regional train drivers through combined mass meetings, demonstrations, and industrial actions.

Yarra Trams, Metro Trains, and V/Line workers are engaged in a political fight against the big business-backed state government and its pro-privatisation agenda. They can win the active support of the entire working class by developing a campaign for the abolition of the widely despised transport privatisation measures and turning out to other workers confronting similar attacks on their jobs, wages, and conditions.