The US Senate voted Friday against hearing witnesses in the impeachment trial of Donald Trump, setting the stage for the president’s likely acquittal on Wednesday.

The Democrats, who hold 47 seats in the 100-member chamber, had sought to peel off four Republicans to provide the 51 votes needed to approve the issuance of a subpoena for the testimony of former National Security Advisor John Bolton.

Last Sunday, the New York Times published an article reporting that Bolton, who left the White House under acrimonious circumstances in September, has written in his still unpublished book that Trump told him in July that he would release military aid approved by Congress for Ukraine only when the Ukrainian president announced a corruption investigation into Hunter Biden, the son of Trump’s potential opponent in the 2020 elections, former Vice President Joe Biden. This contradicts the president’s claims that there was no “quid quo pro” linking the military aid to an investigation of the Bidens. 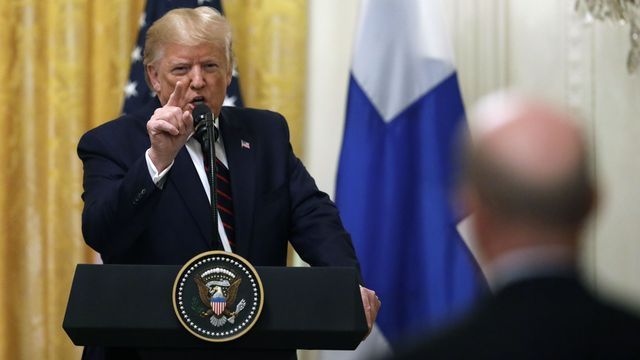 The 51-49 vote against calling Bolton or any other witnesses opens the way for a speedy conclusion of the impeachment trial on Wednesday, with the vote to convict and remove the president expected to fall far short of the required two-thirds majority. The vote is now slated to take place just one day after Trump delivers his State of the Union address to Congress on Tuesday.

From the beginning of the impeachment drive, the Democrats have refused to seek Trump’s removal on the basis of the many impeachable attacks on democratic rights he has committed, including inciting violence against his political opponents, overriding Congress by means of a declaration of emergency to use Pentagon money to build his border wall, the abrogation of the right to asylum and mass incarceration of immigrants in concentration camps along the Mexican border, and his drone missile murder of a high-ranking Iranian government official, an act of war and war crime carried out without congressional authorization.

Instead, the Democrats have conducted their struggle against the Trump administration as a political intrigue within the state, centered on the charge that Trump is not pursuing a sufficiently aggressive foreign policy against Russia.

This campaign, carried out in alliance with disaffected sections of the intelligence, military and foreign policy establishment, was deliberately tailored to avoid arousing the widespread and intense popular opposition to Trump, which the Democrats fear no less than Trump does.

The right-wing character of the Democrats’ impeachment drive was expressed in the emergence of the arch-warmonger John Bolton as their hoped-for star witness in the Senate trial. Bolton is a notorious war criminal, responsible for lying to the public, along with his co-conspirators in the Bush administration, to launch a war in Iraq that led to the deaths of over a million people. He has advocated war against Iran, North Korea and Venezuela.

The Democrats’ impeachment drive was the outgrowth of the discredited Mueller investigation, based on the unsubstantiated claim that the 2016 Trump campaign colluded with the Russian government and WikiLeaks to undermine the campaign of Hillary Clinton, including through the publication of Democratic Party emails exposing efforts to sabotage the campaign of rival Bernie Sanders and Clinton speeches to Wall Street documenting her subservience to the financial oligarchy.

After Mueller failed to find evidence of collusion between the Trump campaign and the Russian government, the Democrats switched their allegations of “foreign meddling” in US elections to a July 25 phone call between Trump and Ukrainian President Volodymyr Zelensky.

On August 12, 2019, a CIA officer submitted a “whistleblower” complaint alleging that “the president of the United States is using the power of his office to solicit interference from a foreign country in the 2020 elections.” The report charged that Trump sought to “pressure the Ukrainian leader to take actions to help the President’s 2020 reelection bid,” including seeking to “initiate or continue an investigation in the activities of former Vice President Joseph Biden and his son, Hunter Biden,” as well as seeking Ukrainian assistance in casting doubt on the narrative of Russian intervention in the 2020 election.

This was seized on by the Democrats to allege that Trump had withheld the military aid to Ukraine, an “ally at war with Russia,” in order to pressure Ukraine into announcing the investigation, thereby jeopardizing US “national security.”

In fact, Trump’s withholding of the military aid had already provoked a fierce internal conflict within his administration, with State Department, Pentagon and National Security Council officials, including Bolton, opposing the move and working to get the money released. The ferocity of the conflict suggests that the delay in military aid was seen to cut across internal timetables for a major escalation of Ukraine’s conflict with Russia.

As the New York Times reported in an extensive report last month, “Mr. Trump’s order to hold $391 million worth of sniper rifles, rocket-propelled grenades, night vision goggles, medical aid and other equipment the Ukrainian military needed to fight a grinding war against Russian-backed separatists would help pave a path to the president’s impeachment.”

Just minutes before the December vote in the House of Representatives to bring articles of impeachment against Trump, House Intelligence Committee Chairman Adam Schiff declared, “Ukraine is fighting our fight against the Russians, against their expansionism. That’s our fight, too.” During the Senate trial, Schiff said that “the United States aids Ukraine and her people so that we can fight Russia over there and we don’t have to fight Russia here.”

For its part, Trump’s defense team has used the impeachment proceedings to assert a vast expansion of presidential powers at the expense of Congress, laying the pseudo-legal basis for a presidential dictatorship. Trump’s attorneys repeatedly stated that the United States is not a “parliamentary democracy,” declaring that the president does not “serve at the pleasure of the Congress,” asserting this in the context of denigrating Congress’ powers of oversight as laid down in the US Constitution.

The legal sophist Alan Dershowitz argued that the president can be impeached only for committing crimes on the statute books, and that neither “abuse of power” nor “obstruction of Congress” is an impeachable offense. This is a legal premise which, if accepted, would invalidate the articles of impeachment against Richard Nixon, who resigned in order to avoid being impeached in the House for obstruction of justice, abuse of power and contempt of Congress.

The reactionary basis of the Democrat’s impeachment campaign has created conditions in which the Trump White House, widely hated, wracked with crisis and facing an upsurge in working class resistance both in the US and internationally, will feel emboldened to accelerate its efforts to transform the presidency into a dictatorship and whip up an extra-parliamentary fascistic movement.

On Thursday, Trump held a rally in Des Moines, Iowa, the state that on Monday will hold the first Democratic presidential primary contest. In his speech he pledged that “America will never be a socialist country” and vowed to defeat the “radical socialist Democrats who are right down the street.”

He once again implied that he will defy constitutional term limits, declaring, “When we leave in 10, 14, 18, 22 years from now, the New York Times will be out of business and so will a lot of them,” referring to critical media outlets.

As the World Socialist Web Site wrote following the impeachment vote: “In their own way, both parties represent the twin imperatives of American imperialism under conditions of social crisis and the loss of its global hegemony. The Democrats embody the drive to war; the Republicans, in the form of Trump, embody the move toward fascistic and authoritarian forms of rule.”

The collapse of the impeachment drive has made clear that no serious struggle against the Trump administration is possible in alliance with the Democratic Party. The removal of Trump from office is an urgent political task. But it can be achieved only through an independent social and political movement of the working class. The essential prerequisite for the building of such a movement is a total and unequivocal break with the Democratic and Republican parties and the building of a socialist movement of the working class.