This week in history: February 3-9 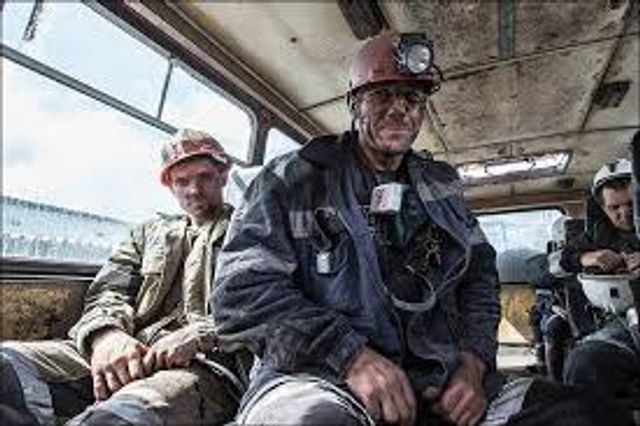 On February 8, 1995, more than 600,000 coal miners staged a one-day strike across Russia, shutting down mines from Sakhalin in the east to the Don River basin, demanding payment of back wages and increased subsidies from the government of President Boris Yeltsin for the coal industry. Many of the miners had not been paid since the previous October.

At least 200 out of 228 coal mines in Russia were affected. The only major coal producing area which did not participate, Vorkuta in the northern Urals, had its own one-day strike on February 6. Protesters held signs reading “Where is our money?” The Arctic city was said by Tass news agency to be on the brink of “social upheaval,” with local government and construction workers joining in the protest.

In Rostov-on-Don in southern Russia, 76,000 miners had been on strike indefinitely since February 1, demanding back wages and a meeting with high-level officials. Approximately 250,000 teachers joined the strike as well. First Deputy Prime Minister Anatoly Chubais said he would fly to the region to meet with them; however, the government at that point had only agreed to pay back wages for November and December—about half the total due.

An economist in the presidential analytical center, Mikhail G. Delyagin, told the press: “The consequences of the strike could be very grave, because we are in the middle of winter, and coal is vital to our energy plans.” Coal provided heat to nearly 60 percent of homes in Russia, not to mention its key role in industry.

In neighboring Kazakhstan, coal miners on strike for three weeks over unpaid wages began returning to work February 6, after the republic’s largest steel works paid most of its debt for coking coal. President Nursultan Nazarbayev refused any other pay concessions to the 100,000 strikers, claiming the coal industry owed the government money for past subsidies. 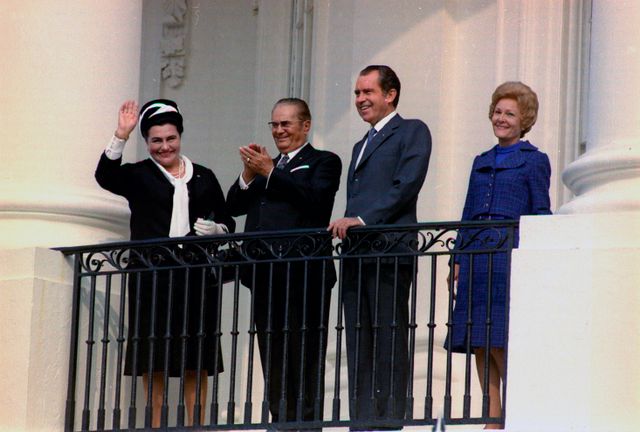 Tito and Nixon at the White House

On February 6, 1970, the government of Yugoslavia signed a three-year trade agreement with the European Economic Community, also referred to as the Common Market. The deal was an early step in the drive to restore capitalism in Eastern Europe.

The agreement imposed price fixes on goods imported from Yugoslavia, and in return the Common Market countries agreed not to impose any additional import taxes on Yugoslavian products. Beef was the import of particular importance, with large amounts being exported from Yugoslavia to Italy and Germany.

Yugoslavia emerged from the Second World War with a government formed on the Stalinist model, but with an independent national basis, since the Yugoslav Communist Party of President Josip Tito had led a successful military struggle against the Nazi occupation and the fascist-led forces like the Croatian-based Ustasha. Tito refused to join the Moscow-dominated Warsaw Pact military alliance.

In 1961, Tito was a founding member of the “Non-aligned Movement,” which brought together a number of countries that were not formally aligned with either NATO or the Warsaw Pact, but rather utilized the Cold War conflict to maintain a position outside of the two blocs, including Egypt, India and many newly independent African countries. Yugoslavia’s membership in the organization provided the political basis to maneuver between Stalinism and imperialism as the need arose.

The trade deal with the EEC, forerunner of the European Union, was a further development in this process, as Tito shifted towards economic dependence on the West. The 1970 trade agreement not only began a period of increased and regular trading with capitalist countries, but also began a period of reckless borrowing from the United States and the International Monetary Fund. Yugoslavian debt jumped from $3.1 billion in 1971 to over $20 billion in 1982. In order to meet the demands of capital, the Yugoslav centralized economy and nationalized property relations were gradually dismantled. During the same period, 1971 to 1982, unemployment dramatically increased from 6.7 percent to 14.4 percent.

The pressure put on the Yugoslav economy by a sudden influx of foreign capital made the “middle road” program impossible. After Tito’s death in 1980, Yugoslavian leaders found themselves forced into austerity programs that demanded massive cuts in social spending, ended nationalized property, and planned the restoration of capitalism. It was this scramble for the resources made available by the collapse of the Yugoslav economy which set the stage for NATO’s wars in the region and the bombings of Serbia in the 1990s. 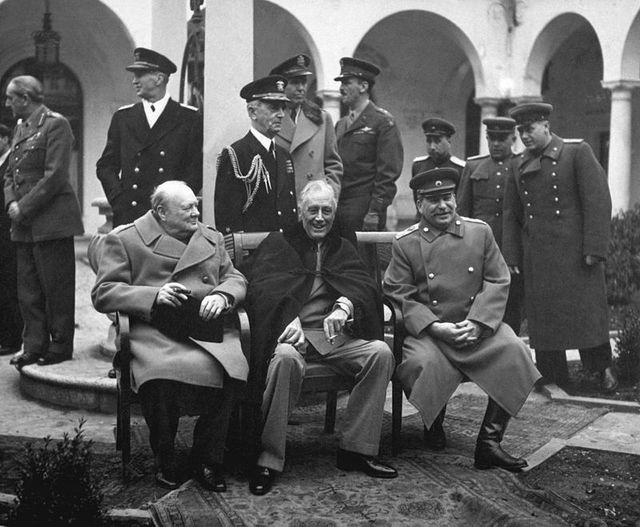 Churchill, Roosevelt and Stalin at Yalta

On February 4, 1945, US President Franklin D. Roosevelt, British Prime Minister Winston Churchill and Soviet dictator Joseph Stalin gathered in the Crimean resort city of Yalta, to begin negotiations on the carve-up of Europe, and the world, in the aftermath of the anticipated Allied victory in the Second World War. The Yalta conference was one of a series of such gatherings that included the Tehran conference in 1943, and that would be followed by the Potsdam Conference in August 1945.

The meeting was held amid an acute crisis of the fascist regimes. The German Third Reich had suffered crippling military defeats in eastern, southern and western Europe. The allies, having invaded and overrun France the previous year, were preparing for a full-scale invasion of Germany. In Asia, the imperial Japanese regime was increasingly isolated, suffering blows at the hands of the Chinese masses in east Asia, and losing a series of conflicts with the US Army over control of the Philippines.

In this context, the series of meetings between the British, US and Soviet leaderships were aimed at hammering out an agreement for the establishment of spheres of influence in the post-war period.

The tensions between the rival imperialist powers, nominally united as military allies, were on display even before the conference proceedings began. General Charles de Gaulle, who headed the new French government, was excluded from the event. He attributed it to enmity towards him on the part of Roosevelt.

During the discussions, Stalin reiterated a guarantee he had given to Churchill at a Moscow meeting in October 1944 that the Soviet regime had no designs on Western Europe.

In practice, this meant that the Stalinist bureaucracy would prevent the insurgent anti-fascist movements throughout the continent from developing in the direction of a revolutionary struggle for the overthrow of capitalism. The logic of this position had been made clear in Greece, where the Soviet bureaucracy had tacitly backed brutal British attacks on anti-fascist partisans throughout December 1944, explicitly aimed at establishing a stable capitalist regime.

In exchange for its service to capitalism, the Stalinist bureaucracy hoped to win agreement for the establishment of a “buffer zone” under its control in Eastern Europe. To that end, Stalin pushed for an agreement at the conference for Soviet control of Poland at the end of the war. This was agreed, on the proviso that free elections would be held. Underscoring his subservience to world imperialism, Stalin agreed that the Soviet Union would enter the United Nations, to be established at the end of the war, and lobbied for each of the constituent republics of the USSR to be recognized as individual members. 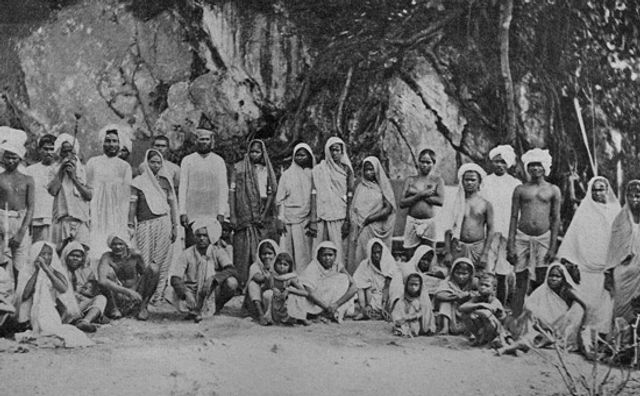 On February 5, 1920, the Reform Party government of William Massey in New Zealand sent a contingent of 55 soldiers, the Fiji Expeditionary Force under the command of Major Edward Puttick, to Fiji to help the British colonial government suppress a strike of public employees. Australian forces were also mobilized to crush the strike.

Fiji’s first mass strike began on January 15, 1920, after the system of indenture, girmit, which had imported tens of thousands of Indian laborers to Fiji since 1879, was abolished on January 1. Authorities had told public works workers, who largely came from families that had been brought to Fiji from India, that they would have their work week increased to 48 hours. Workers rejected this and demanded wage increases because inflation since 1914 had raised prices by 100 percent.

The government refused to negotiate, and the strike spread throughout southeastern Viti Levu, the largest island of Fiji and home to the capital of Suva. The government organized bands of thugs to supplement the police and called on the assistance of the Australian and New Zealand military.

One striker was killed by the government and the strike was quelled. The struggle, however, was a prelude to the strikes that erupted among impoverished cane famers and agricultural laborers in the western part of the island the next year against the Australian Colonial Sugar Refining Company.

New Zealand, for its part, had participated with the other Allied imperialist powers in the first World War. Over 100,000 men were mobilized out of a population of a million with a stunning 58 percent casualty rate. The war had whetted the regional ambitions of the New Zealand bourgeoisie, particularly after the capture of German Samoa in 1914, which it governed as the Western Samoa Trust Territory until 1962.