A report released in January found that a majority of millennials around the world fear it is more likely than not that a nuclear attack will happen sometime in the next decade.

The study was conducted by the International Committee of the Red Cross (ICRC), which surveyed 16,000 millennials (defined in this study as adults between the ages of 20 and 35) in 16 countries in 2019: Afghanistan, Colombia, France, Indonesia, Israel, Malaysia, Mexico, Nigeria, Palestine, Russia, South Africa, Syria, Switzerland, the United Kingdom, Ukraine and the United States.

Half of the countries in the study are currently experiencing military conflict. Despite the glorification of the military by the media and politicians, youth and workers across the world are overwhelmingly hostile to war and militarism in all forms.

The report reflects an understanding among youth that nuclear weapons pose an immediate threat to all of humanity. The study found that millennials overwhelmingly oppose the use of weapons of mass destruction, in any form—nuclear, biological or chemical—and in all circumstances.

More than three in five millennials have the same opinion opposing anti-personnel landmines, at 63 percent, and cluster bombs, at 64 percent.

Unsurprisingly, after nine years of war stoked by American imperialism and its Islamist proxies, Syrian millennials showed the highest levels of disapproval for weapons of mass destruction, with 96 percent saying that it is never acceptable to use chemical or biological weapons, while 98 percent said it is never acceptable to use nuclear weapons. Over the last five years, the United States has carried out a direct bombardment of Syria under the guise of fighting ISIS, which has included leveling entire cities in the country.

Many youth throughout the world have drawn their conclusions about war and militarism from firsthand experience.

Across all 16 countries surveyed, one in four millennials, 27 percent, said they have had direct experience of war and armed conflict. For this study, direct experience includes participation in combat, being wounded, being forced to leave their home, losing contact with a close relative, or any other situation that could arise due to armed conflict.

This percentage rises to almost half if one considers those countries which are currently in the midst of a military conflict. Almost every Syrian millennial interviewed has experienced conflict, 96 percent, as have over half of millennials in Afghanistan.

The devastating and violent effects of war and militarism have been ingrained into the experience of an entire generation. Millions of workers and youth have been maimed, broken and scarred, with generations of families and friends affected by the trauma caused largely by US imperialism. 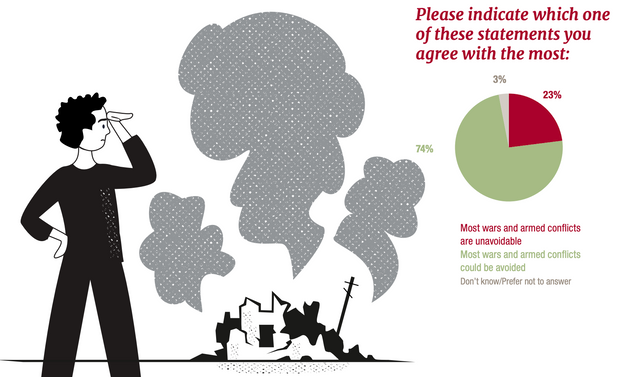 Despite these horrific experiences there are many indications that youth throughout the world remain optimistic about the future. The ICRC report showed that a clear majority of millennials think that wars and armed conflict are avoidable.

The International Youth and Students for Social Equality, the youth and student movement of the Socialist Equality Party, spoke to young people across the US about many of the issues raised in the ICRC study including the impact of decades of unending war on their lives, their attitude towards a third world war, and, perhaps most importantly, what they saw as the way forward in the fight against war.

Sebastian, a 32-year-old student at the University of California, Berkeley, told the IYSSE he believes, “a third world war would and could only mean the complete and swift destruction of humanity as we know it.”

He went on to explain the wars which have been orchestrated by the US in his lifetime: “The US has been at war either overtly or covertly my entire life. The wars span every administration and know no party lines. There was Reagan’s campaign of terror against Central America, George Bush Senior’s invasion of Panama and the start of the Gulf War, Clinton’s invasion of Haiti, George W. Bush’s campaign against ‘terror’ which became the longest war we have ever been in. And then there’s Obama who promised he was going to get us out of war but instead took us from two to seven wars.”

Sebastian, expressing a sentiment widely felt by workers and youth around the world, explained why he is opposed to war, noting, “I’m against war because I feel war only serves those in power and sacrifices the poor in the name of ‘empire.’”

“I believe in solidarity with all people around the world,” he added. 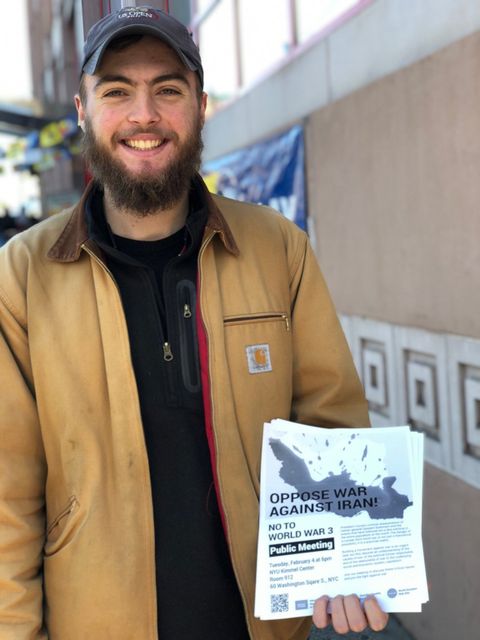 Karsten, who is 20 and from New York, told the IYSSE that he believes, “war is used to enlarge the personal fortunes of the ruling elite.”

Relating the issue of the wars abroad with the domestic attack on workers at home, Karsten said that he thinks war serves a dual purpose for the ruling elite: “I think they will turn towards war in order to quash the growing push for social change among workers and young people that we have seen emerging.”

He went on, “Sanders has proven to be a part of the Democratic Party establishment. I think if he was elected he would in fact support war. It has been shown that he supports American imperialism through his votes for funding the Iraq war and his vote for war with Afghanistan.”

Noel, 19, from Chicago said that he thinks a third world war “would be a global catastrophe on a scale never seen before and probably never seen again.”

Speaking to the way forward in the fight against war, Noel said he agreed with the IYSSE: “Only through a true united and mass working class movement can we avoid a third world war.”