Amidst growth of class struggle, union membership in US falls to historic lows

In the midst of a wave of strikes and social struggles in the United States and around the world, the Bureau of Labor Statistics released figures last week showing that union membership in the United States fell by another 170,000 in 2019, declining to 14.6 million workers, or 10.3 percent of the workforce.

The number of unionized workers in the private sector alone fell by 101,000 to 6.2 percent, the lowest figure in a century or more. 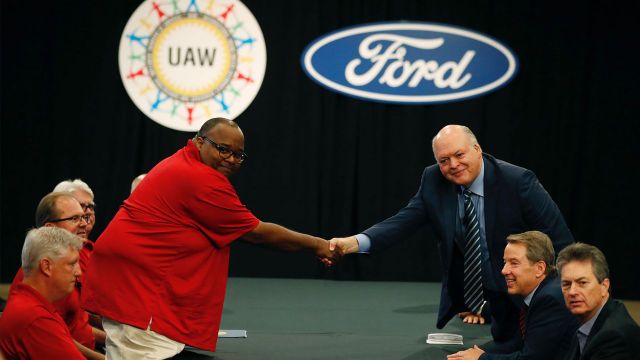 This contrasts to a 20.1 percent unionization rate in 1983 and a rate of nearly 35 percent when it peaked in 1954. The number of union members today is less than half what it was at its high point in 1979, even though the labor force has grown by more than 50 percent.

The decline of union membership is not due to any lack of militancy among workers. On the contrary, strike activity in the United States has increased over the last two years as part of the growth of the class struggle around the world, with the number of workers involved in major work stoppages reaching the highest levels since 1986.

Over the last two years, nearly one million US workers were involved in 47 major strikes, including hundreds of thousands of teachers, many of them non-union members in West Virginia, the Carolinas and other states. In 2019, teachers in Los Angeles, Chicago and other cities were joined by significant sections of industrial workers, including 48,000 General Motors workers who struck for 40 days—the longest national auto strike in half a century.

If union membership continues to hemorrhage, it is because the trade unions function as direct tools of corporate management. Far from resisting the attack on jobs, living standards and working conditions, the unions facilitate them.

Well aware that the pro-company organizations have nothing to offer them, workers overwhelmingly voted against them in several high-profile union recognition votes over the last several years, including the Fuyao Glass America plant in Dayton, Ohio; Volkswagen’s Chattanooga, Tennessee, assembly plant; the Nissan plant in Canton, Mississippi; and the Boeing 787 Dreamliner plant in North Charleston, South Carolina.

The latest unionization figures underscore the need for workers to free themselves from the grip of these right-wing, pro-corporate organizations and establish new, genuinely democratic and militant organizations of struggle—rank-and-file factory and workplace committees.

Apologists for the unions blame the decline in union membership on opposition from the corporations and the Trump administration, as well as state “right to work” laws. It is a matter of historical fact, however, that union membership grew sharply in periods like the 1930s, when union militants had to contend with far greater resistance from the companies and the government, including repression by the National Guard and private gun thugs and the lynching of union organizers.

But that was a period when new mass industrial unions emerged from a break with the old labor organizations of the American Federation of Labor. They were formed in mass struggles, including sit-down strikes, which were led by socialists and left-wing militants.

In a notice sent out last week by the Economic Policy Institute, a think tank closely aligned with the AFL-CIO labor federation and the Democratic Party, Heidi Shierholz, the director of policy at the EPI Policy Center, said that the decline in union membership was “bad news for the middle class of the United States” (emphasis added). Ms. Shierholz said more than she intended.

The waning influence of the unions is certainly “bad news” for the officials who staff these organizations, and they can hardly be described as members or even representatives of the working class. Union officials—including the heads of the American Federation of Teachers, National Education Association, Teamsters, United Food and Commercial Workers and other unions—take in $300,000, $400,000 and $500,000 a year, plus expense accounts and other perks, putting them in the top one or two percent income bracket. They make anywhere between 10 and 15 times what the workers they supposedly represent earn.

The unions have for decades negotiated concessions, which have reduced the wages and benefits of their members, while sanctioning factory closures and mass layoffs that have decimated working class communities. But the union officials have not suffered the same fate. Prospering from their control of multi-billion-dollar pension funds, seats on corporate boards and labor-management slush funds, they inhabit an entirely different world.

Nowhere is this more apparent than in the United Auto Workers, which federal prosecutors labeled a “criminal enterprise” in court proceedings last month. Since 2000, the number of GM, Ford and Chrysler workers has fallen by more than half. Over the same period, top UAW officials embezzled millions of dollars in union assets to fund golf outings, luxury condos, high-priced meals and other indulgences.

In addition, UAW negotiators took millions of dollars in bribes, funneled through labor-management training centers, to sign pro-company contracts that cut the wages of new workers in half, abolished the eight-hour day, and freed the company’s hand to abuse workers under a new “streamlined” grievance procedure.

Fearing a rank-and-file rebellion last summer, the UAW called the strike at GM. Instead of providing workers with adequate strike benefits to sustain a serious fight, the UAW starved them on $250 a week in strike pay. In the decades leading up to the walkout, the UAW transferred hundreds of millions of dollars from the dues-funded strike fund to pay for “administrative” and “organizing” expenses, i.e., to pad the salaries of the approximately 450 executives, office personnel and flunkeys on the payroll of the UAW International.

After isolating the striking workers and starving them into submission, the UAW signed an agreement with GM that sanctioned more plant closures, continued two-tier wages and the expansion of temporary workers, who pay union dues but have no rights.

These are not “workers’ organizations,” but labor syndicates run by and for a corrupt upper-middle class and aspiring capitalist social layer. Hated by the workers, these organizations rely on corporate funding and the sanction of the capitalist state for their existence.

This is a worldwide phenomenon. In France, the unions, which received nearly $96 million from both the government and the employers in 2017, are collaborating with President Emmanuel Macron to suppress a wave of strikes and protests and impose massive pension cuts.

In Germany, where the unions are by law “social partners” with management, IG Metall is colluding in the destruction of hundreds of thousands of auto jobs, including 20,000 at Volkswagen alone.

Various pseudo-left organizations such as the Democratic Socialists of America (DSA) promote the fiction that the unions can be reformed. They do so in large part because their own members are increasingly obtaining lucrative positions within the trade union apparatus, where they join in the dirty work of deceiving and betraying the workers.

The transformation of the unions into instruments of big business is the result of the failure of their nationalist and pro-capitalist program, under conditions of the global integration of production and the internationalization of the conditions of the working class. The right-wing, anti-democratic bastions of corruption that call themselves unions are the product of the decades-long integration of these organizations into the structure of corporate management and the capitalist state.

The interests of the unions and the forces that control them are irreconcilably opposed to those of the working class. They are on the opposite side of the class divide. Their leaders fear the political radicalization of workers and youth and the growing support for socialism no less than their ruling class masters. In response to a challenge from below to the capitalist system, they will resort to gangsterism and state repression.

Over the past two years, there has been a rising tide of class struggle, including mass strikes and protests in Mexico, the United States and countries throughout Europe, the Middle East and Africa. Increasingly, workers have sought to break free of the grip of the unions and unify their struggles across borders.

The formation of new organizations, based on what workers need, not what the capitalist profit system claims it can afford, is the essential prerequisite for mobilizing and uniting the working class. Rank-and-file factory and workplace committees are the form through which workers can advance their own demands—including the rehiring of victimized and laid-off workers, the restoration of all givebacks, the elimination of tiers and the permanent hiring of all temporary workers—and fight for industrial democracy and workers’ control in the workplace.

The workers’ independent committees, freed from the bureaucratic grip of the nationalist trade unions, will create the conditions for unifying workers all over the world in a common struggle.

The World Socialist Web Site and the Socialist Equality Party will do everything in our power to promote and assist in the establishment of independent workers’ organizations, connecting the growth of the class struggle to an international socialist political perspective and program. We urge workers interested in establishing such committees to contact us today.