Advocate (2019): “An angry, optimistic woman” in pursuit of justice for the Palestinians

The documentary Advocate, produced and directed by Rachel Leah Jones and Philippe Bellaiche, tells the story of Lea Tsemel’s life in an unsentimental, sober and engrossing way. 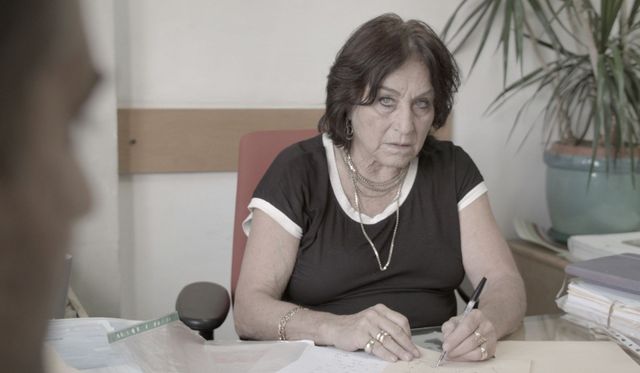 The film premiered at last year’s Sundance Film Festival and screened at the Human Rights Watch Film Festival in New York. It was named best picture in Tel Aviv’s annual Docaviv Film Festival, a decision that met with condemnation from Israel’s Minister of Culture Miri Regev.

It has opened in several cities in the US and UK.

Tsemel, a remarkable Israeli human rights lawyer, has defended Palestinian political prisoners in Israeli courts for nearly 50 years, insisting on their humanity and right to a fair trial. Her untiring work has earned her enormous respect among Palestinians. A staunch critic of Israel’s occupation of the Palestinian territories seized in the 1967 war, she argues that Palestinians who carry out politically motivated violence are freedom fighters, not “terrorists.”

Advocate weaves the story of Tsemel’s life in between her work defending two young Palestinians in two separate and terrible cases, following them through their remand, indictments, pleas, testimonies, plea bargaining negotiations, verdict, punishment proceedings, sentencing and appeals that illustrate the nature of Israeli “justice.”

The daughter of a woman who had emigrated with her mother to Palestine in 1933 and had lost the rest of her family in the Nazi Holocaust, Tsemel was born in 1945 and grew up in Haifa. She was a law student at Jerusalem’s Hebrew University during the 1967 Israeli-Arab War that saw Israel defeat its Arab neighbours and seize land from Jordan, Egypt and Syria. Israel annexed East Jerusalem and still occupies the West Bank, Syria’s Golan Heights and Gaza, which it has subjected to a punishing 12-year blockade. 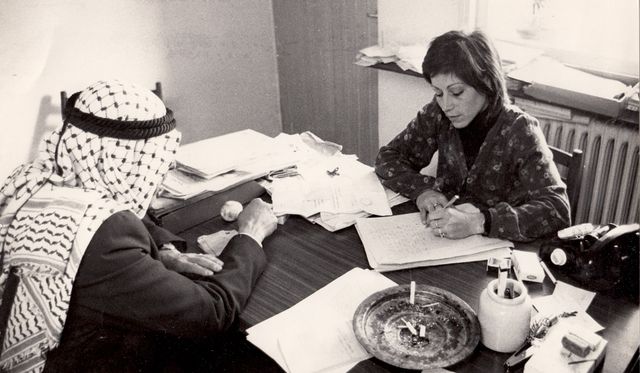 Volunteering for military service, Tsemel was the first Israeli woman to reach the Wailing Wall in East Jerusalem, amid scenes of much Israeli rejoicing. But after the war, as scores of homes were demolished to make way for a large praying plaza, she began to wonder about the people who used to live there and to question the Israeli occupation.

She joined the leftist organization Matzpen, which focuses on the national struggle of the Palestinians, of which she says, “From that moment, I never looked back.” She later met the man who would become her husband and political co-thinker, Michel Warschawski, who was from a religious background.

After the 1967 War, Tsemel began her legal career, defending those who found themselves subject to abuse and violence that was typically dismissed or covered up, property confiscations, collective punishment administered for whole families, neighborhoods and groups of citizens as well as those arrested for committing violent acts for political purposes.

Her first political trial was in 1972 when she represented Daoud Turki and Udi Adiv, members of an Arab-Jewish Underground movement, the Red Front, that emerged out of Matzpen, who were accused of espionage for undertaking a secret trip to Syria to link up with Arabs fighting Zionism and the State of Israel. The defendants described their interrogations during which they had been forced to confess, that included shackling, sleep deprivation, deafening music, interrogations day and night, and beatings, carried out systematically to avoid leaving marks. The judge dismissed this evidence, finding Turki and Adiv guilty and sentencing them to 17 years in prison, and “faulted” Tsemel for identifying with Israel’s “enemies.” 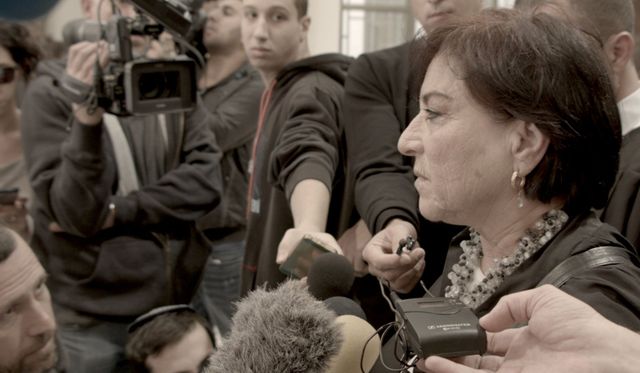 In a later case, she defended her husband, who had set up the Alternative Information Center, an organization of Israeli and Palestinian anti-Zionist activists, in 1984, after his arrest for “providing services for illegal (Palestinian) organizations.”

In 1989, Warschawski was sentenced to 20 months in prison, with a 10-month suspended sentence, for typesetting a booklet that the judges ruled had come from members of the Popular Front for the Liberation of Palestine, which described torture and interrogation techniques allegedly employed by Israel's security apparatus and gave advice on how to withstand them.

The film’s focus, however, is not so much on the Israel-Palestinian conflict as on Tsemel’s daily and dogged struggle for justice for her Palestinian clients.

In the first case, 13-year old Ahmad and his 15-year-old cousin Hassan from Beit Hanina in the occupied West Bank, took very large souvenir knives from their homes to the nearby settlement of Pisgat Zeev, where Hassan stabbed and injured an Israeli man and a boy, and was himself shot by the police. Angry Israelis demanded the police shoot Ahmad as well.

Ahmad, who became Tsemel’s client, did not use his knife and had urged his cousin not to attack another child.

The second case involves Israa Jaabis, a Palestinian woman charged with attempted murder for what Israeli officials assumed was a botched suicide bombing. Jaabis had driven to Jerusalem with two butane tanks in her car, before setting fire to the car and injuring a policeman lightly and herself severely.

Again, the issue was one of intent. Was it murder or an attempted suicide? According to Jaabis’ relatives, she was a depressed woman in an unhappy marriage who had attempted suicide twice before. Tsemel wandered whether she had sought to try “suicide by cop,” by no means an unknown phenomenon among desperate young Palestinians.

Speaking of Ahmad’s case, Tsemel says, “It is as if I live with the illusion that I can do something in the world, make an impact. That there is someone to reason with. It is strange. I am not willing to give up trying.”

She adds, “This is an occupation! And it must be responded to. And everyone does so according to their capabilities. The victims, the vanquished, the children, the women—respond in their own way. The expectation that Palestinians can find justice in Israeli courts may have been buried for good. I hope not. I really hope not. The path to the Supreme Court still lies ahead of us. We will appeal as soon as possible, in pursuit of justice.”

Towards the end of Advocate, Tsemel says of herself, “I am a very angry, optimistic woman.” Yet, as she admits, she has few victories to show for all her hard work. “For us, a victory is one year deducted from a five-year sentence.”

Her only major victory was in 1999, when she won a landmark case in the Supreme Court outlawing the torture of detained Palestinians during interrogations. Yet as the film acknowledges, the security services have ignored the court order.

The valuable and courageous elements in Tsemel’s work need to be distinguished from the bankrupt political perspective of pleading for liberal reform and a national solution to the long-running conflict.

Advocate exposes the bankruptcy of the pursuit of justice for the Palestinians through the Israeli courts. Israel’s legal system has now become a major battle ground in the elections to be held next month, the third in less than a year, with Prime Minister Benjamin Netanyahu complaining of a political coup against him at the behest of the “left” and pro-Arab forces. If he wins, he intends to bring the judiciary under the direct control of the government.

Matzpen, the party Tsemel joined in 1967, and its offshoots, opposed Israel’s occupation of the territories conquered in the 1967 War, and sought to create a popular front in favour of a “de-Zionized” Israel—an early variant of the “two-state solution.”

It rejected the struggle for the unification of the working class across borders and religious and ethnic divisions, against capitalism and for socialism, working instead with petty-bourgeois radical organisations in Europe and Palestinian parties such as the Palestinian Front for the Liberation of Palestine (PFLP) and the Democratic Front for the Liberation of Palestine (DFLP).

The end result has been to disarm the Palestinian masses and to help perpetuate the subordination of the Israeli working class to their own ruling class.

The judicial, economic, social and political conditions in Israel and Palestine are an indictment of the Zionist project and the nation state, as the solution to the oppression of the Jews. The foundation of the Zionist state was presented as the answer to the Nazi Holocaust and broader European persecution of the Jews, but—realised in the form of a religious-based capitalist state created by the dispossession of another people—Israel has instead become synonymous with Palestinian oppression and war crimes.

Moreover, the history of the Palestine Liberation Organization (PLO), the umbrella group that includes both the PFLP and the DFLP, has repeatedly demonstrated that the subjugation of the Palestinian people was made possible not simply by Israeli violence, but by the treachery of the Arab bourgeoisie. The leadership of the PLO, which sought to pressure the Arab regimes and maneuver between them as well relying on the Soviet Union as a counterweight to Israel and the US, itself now grows rich through the exploitation of the Palestinian working class, while acting as de facto Israeli police in the Occupied Territories.