The day-long delay in the reporting of voting results from Monday night’s Iowa Democratic caucuses is an unprecedented event, even by the sordid standards of American capitalist politics.

For some 20 hours after an estimated 175,000 people had participated in caucus meetings, the Iowa Democratic Party refused to report a single vote, claiming technical difficulties in the app used to report the precinct caucus totals to party headquarters.

When partial vote totals were finally released at 4 p.m. Tuesday, local time in Des Moines, it was for only 62 percent of the nearly 1,800 precinct caucuses. State party chairman Troy Price refused to explain how the 62 percent had been selected, or what distinguished these from the 38 percent not yet reported. He brushed aside repeated questions about when a final count would be ready.

Whatever the specific intentions of the Iowa state party leaders, every action they have taken in the caucus crisis has been to the detriment of Vermont Senator Bernie Sanders and to the benefit of former South Bend mayor Pete Buttigieg. The former naval intelligence officer has been declared the winner of the caucuses by the media because, in the results tabulated for 62 percent of precincts, he placed first in the obscure category of “state delegate equivalents,” the metric highlighted by the state party. 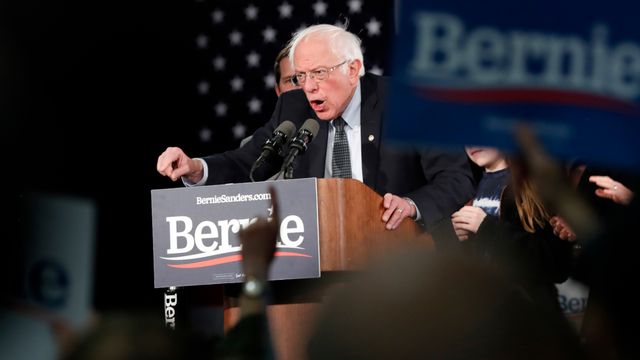 In the same tabulation, Sanders won the most votes, both in the initial count and in the second round after “unviable” candidates—those with less than 15 percent support—had been eliminated. Moreover, much of the unreported vote is from college and factory towns where the Vermont senator posted his best results. It is quite possible that Sanders will also lead in delegate equivalents once a final count is reported.

In previous Iowa caucuses, results were tabulated and made public within two hours of voters arriving at the precinct. The candidates proclaimed the winner in the last four contested Iowa caucuses all went on to win the party’s nomination: Al Gore in 2000, John Kerry in 2004, Barack Obama in 2008 and Hillary Clinton in 2016. But there were no media headlines Monday night and Tuesday morning about Bernie Sanders winning the most votes in Iowa in 2020.

Nor were there blaring headlines about the debacle for former Vice President Joe Biden, once the presumed frontrunner for the Democratic nomination, who finished a poor fourth in the tally reported Tuesday afternoon. Biden may actually finish as low as fifth in the final count, since Senator Amy Klobuchar trailed him by only a small margin.

It is impossible to say at this point exactly what is behind the delay in reporting from Iowa. However, the claim that all that is involved is a “glitch” in a reporting app—produced by a highly-connected Democratic Party technology company—raises more questions than it answers. The media, which readily swallows incredible tales about Russian “meddling” in American politics, was quick to denounce any questioning of the motives for the delay as a “conspiracy theory.”

The whole process is highly suspect and suspicious, ripe for political manipulation. The delay in the Iowa results, moreover, followed by only a couple of days the cancellation of a final poll by the Des Moines Register, after the Buttigieg campaign complained that at least one caller for the telephone survey had omitted their candidate’s name. The highly influential poll was expected to show a sizeable Sanders lead across the state.

It would be naive to separate the alleged “technical glitches” in the Iowa vote reporting from the broader political context. The weeks leading up to the Iowa caucuses were dominated by a concerted campaign against Sanders, which included the intervention of Hillary Clinton, John Kerry and other figures in the party establishment, as well as the corporate media, all claiming that the nomination of a self-proclaimed “democratic socialist” would have disastrous consequences.

This anti-Sanders campaign demonstrates that the Democratic Party establishment is just as hostile as Donald Trump to the rising militancy in the working class and the growing support for socialism among both working people and youth. It is not Sanders himself, but this shift to the left among the broad masses that is a nightmare for all factions of the capitalist ruling elite.

The Democratic primary campaign has seen the formation of two groups of candidates—a left wing headed by Sanders and Senator Elizabeth Warren, and a right wing comprised of Biden, Buttigieg and Klobuchar. Each has drawn the support of about half the party’s prospective voters.

The US ruling class makes use of the two groups of candidates for different purposes. The Sanders-Warren wing is to contain the leftward movement among workers and youth and divert it back within the confines of the two-party system. The Biden-Buttigieg-Klobuchar wing is to wield the real power within the party, take the nomination, and serve as the replacement for Trump if the ruling class determines that such a change is necessary.

The evident crisis of the Biden campaign has led to increasingly heavy-handed efforts to develop some other alternative for the right-wing faction: the huge fundraising for Buttigieg, the media boomlet for Klobuchar, and, most importantly, the entry into the race of billionaire Michael Bloomberg, whose entire campaign is aimed at supplanting Biden and blocking the nomination of Sanders or Warren.

Significantly, after the scale of the Biden debacle in Iowa became clear, Bloomberg, who has already spent more than $300 million on campaign ads, announced that he would double his ad buys and double his paid staff in the run-up to the “Super Tuesday” primaries and caucuses on March 3. Bloomberg could well spend $1 billion of his $58 billion fortune to secure for himself enough delegates to play a major role in the Democratic nominating convention.

The role of Sanders in 2020 is not fundamentally different from the part he played in 2016, when his “insurgent” campaign ended in his endorsement of Hillary Clinton, the chosen candidate of the bankers and the CIA.

His response to the attempt of the Iowa Democratic Party to rig the caucus result was notably low key. He told reporters that it was “not fair” to suggest that the procedure followed by the state party might be suspect.

His closest campaign aide, Jeff Weaver, denounced the Biden campaign for questioning the conduct of the state party. “I do want to urge people in the interest of not discrediting the party, that folks who are just trying to delay the return of this because of their relative positioning in the results, last night, I think that’s a bit disingenuous,” Weaver said. “Those results should be rolled out as we get them.”

The complacency being promoted by the Sanders campaign is staggering. The fact is that on February 4, no one knew the results of the first contest for the Democratic presidential nomination. One can easily envision a situation where on November 4, only nine months from now, the results of the US presidential election as a whole are unknown, or under challenge, or being openly defied by a president who has repeatedly declared his intention to stay in office well beyond the constitutional two-term limit.

What is most significant about the crisis over the Iowa caucuses is what it says about the level of crisis within the state apparatus. The United States seems incapable of running an election. As the Democratic Party primaries begin, the Trump impeachment is about to end, a process that has revealed extraordinary conflicts within the ruling class over foreign policy.

Underlying everything is a level of social antagonism that cannot be adjudicated electorally. Social tensions are so extreme that the traditional mechanisms of democracy are breaking down.

Whatever the outcome, whoever is selected as the Democratic Party nominee, it will resolve nothing. Every effort of the working class to advance its interests within this process is futile.

There is only one campaign in the 2020 elections that seeks to alert the American people to these dangers and mobilize the working class and youth in a political struggle against the capitalist class in defense of jobs, living standards and democratic rights, and in opposition to imperialist war. That is the campaign of the Socialist Equality Party and its candidates Joseph Kishore for president and Norissa Santa Cruz for vice president.