One million public sector bank employees held a two-day national strike on January 31 and February 1 to demand a 20 percent pay rise, a five-day working week and the incorporation of a special allowance into their basic pay. The workers also demanded the Indian government withdraw its plans for bank mergers and privatisation. 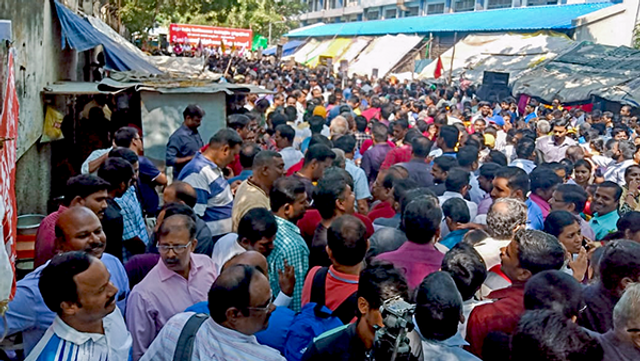 Banking operations were seriously impacted by the walkout in Maharashtra and Gujarat in the west, Tamil Nadu, Andhra Pradesh, Telangana, Karnataka and Kerala in the south, Delhi, Punjab, Uttar Pradesh, Bihar, and Madhya Pradesh in the north and West Bengal in the east.

The strike blocked cash withdrawals and deposits, private bank cheque clearances and money transfers. Bank unions told the media that about 3.1 million cheques worth 230 billion rupees ($US3.22 billion) could not be cleared.

However India’s two major private sector banks, the ICICI and HDFC, functioned normally because the unions restricted the industrial action to the public sector banks.

The UFBU was forced to call the strike in response to workers’ mounting anger over the Indian Banks Association’s (IBA) continued refusal to grant workers’ long-standing demands. In a bid to prevent the strike, the union federation held talks with the IBA to work out a face-saving “solution.” The association rejected all the federation’s demands and only offered a 15 percent pay rise. Public sector bank workers have been demanding a 20 percent pay rise since November 2017.

The two-day national walkout demonstrates public sector bank workers’ determination to fight the austerity and job-cutting policies of Prime Minister Narendra Modi’s Bharatiya Janata Party (BJP)-led government and part of a rising wave of strike action by workers in India and internationally. Tens of thousands of bank workers participated in the multi-million strong January 8 general strike against the Modi government.

Last August, the Modi government announced plans to merge 10 public sector banks into four. Workers fear this will lead to the closure of around 5,000 government bank branches, boost the fortunes of private operators and cut jobs, wages and benefits.

On October 22 last year, some 400,000 public sector bank employees walked out for 24 hours against the government’s mergers plans and a reduction in interest rates on deposits. Confronted with major losses, bank employers are demanding increased workloads and other measures to reduce losses and increase bank assets.

During her budget speech last week Indian Finance Minister Nirmala Sitharaman told parliament that “there is a need for greater private capital” and announced that the government planned to sell 46.5 percent of its holdings in the Industrial Development Bank of India to private, retail and institutional investors on the stock exchange.

Sitharaman’s announcement is directly in line with International Monetary Fund’s (IMF) demands. In December 2017, an IMF “stability report” on India called for “greater participation of the private sector in capitalising the PSBs [Public Sector Banks] and full privatisations.”

As the WSWS noted on January 9: “Since winning re-election last May, with massive big business and corporate media support, the BJP government of Prime Minister Narendra Modi has dramatically escalated its assault on the working class. Through changes to the country’s labour laws, it is promoting the proliferation of precarious contract-labour jobs and further limiting workers’ right to strike and organise. It has also dramatically accelerated the privatisation of public sector enterprises, moving forward with plans to sell off India’s railways, open up the coal industry to private investors, and privatise Air India and Bharat Petroleum. It has also provided big business with another bonanza by slashing the corporate tax rate by 8 percentage points, or more than a quarter.”

The unions are desperately manoeuvring to block any independent mobilisation of the working class against the Modi government, falsely claiming that mass protests and limited strikes will force it to modify its policies. But under conditions of increasing demands by international finance capital and a deepening economic crisis, every Indian government—whether led by the BJP or Congress—will step up its attempts to impose austerity attacks on working people and rural toilers.

The role being played by the unions is directly related to the pro-investor policies of the political parties to which they are affiliated.

These parties are all committed to the same retrogressive neo-liberal economic reforms being implemented by the ruling BJP. Congress, for example, initiated pro-investor economic reforms with the goal of transforming India into a cheap labour platform of global capital in 1991 and aggressively continued those policies whilst in the office at central and state levels. The Stalinist CPM and CPI provided crucial parliamentary support for national governments headed by Congress and carried out the same pro-investor economic policies whilst in power in the Indian states of West Bengal, Tripura and Kerala. The CPM-led administration in Kerala is currently pursuing the same policies.

Indian supporters of the International Committee of the Fourth International (ICFI) spoke with striking bank employees in Chennai on January 31 and circulated hundreds of copies of the WSWS article “Indian workers need a revolutionary socialist program to fight Modi, capitalist austerity and communal reaction.”

Several workers voiced their frustrations with the failure of previous strike action organised by the bank unions to win any gains and said they were interested in further discussion on the revolutionary socialist program outlined in the WSWS article.