On Wednesday, the US Senate voted to acquit President Donald Trump on charges of abuse of power (52-48) and obstruction of Congress (53-47). The largely party-line vote concludes the impeachment process initiated by the Democrats last fall.

The result is a political debacle for the Democratic Party that has only strengthened Trump. 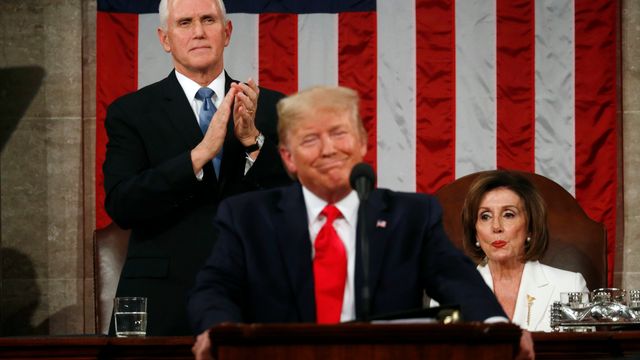 President Donald Trump delivers his State of the Union address to a joint session of Congress in the House Chamber on Capitol Hill in Washington, Tuesday, Feb. 4, 2020, as Vice President Mike Pence and Speaker Nancy Pelosi look on. (Leah Millis/Pool via AP)

Trump has scheduled a national address today at noon. The purpose, as he stated on Twitter, will be to “discuss our Country’s VICTORY on the Impeachment Hoax.” On Wednesday afternoon, Trump retweeted an image of a Time magazine cover showing a series of signs: Trump 2024, Trump 2028, Trump 2032… Trump 4EVA. This is a repetition of his previous threats to remain in office beyond constitutionally mandated limits.

One day before the final vote, the outcome of which was not in doubt, the Democrats gave Trump a platform in Congress to deliver his State of the Union address. Trump used the opportunity to denounce his political opponents, rail against “socialism” and outline a raft of right-wing proposals.

Trump will utilize his acquittal to press forward with his antidemocratic and authoritarian measures. Jonathan Turley, writing in the Washington Post on Tuesday, pointed to the significance of the argument advanced by Alan Dershowitz in defending Trump during the Senate impeachment trial. Dershowitz’s claim that neither “abuse of power” nor “obstruction of Congress” is an impeachable offense became the central axis of Trump’s defense.

“The president’s defense was then tied inextricably to this extreme and chilling argument,” Turley wrote, a defense that has now been endorsed by the Senate.

Another comment in the Post, from David Von Drehle, cited a Gallup poll showing Trump’s approval ratings rising from 39 percent last fall to 49 percent by the end of the impeachment process—”the highest level of his presidency so far and at least three points higher than Barack Obama could claim in early February of his reelection year.”

Citing the same poll, the Wall Street Journal editorial board gloated that the Democrats may have “helped [Trump] win a second term by impeaching him.”

Trump’s inauguration more than three years ago was followed immediately by protests against his attacks on immigrants, his racist policies against refugees, his appointment of fascists to top-level positions in his administration, his pro-corporate policies and tax cuts, his militarist threats, and his attacks on social programs. The day after his inauguration saw the biggest single day of protests across the country in US history, with more than a million people participating.

Popular opposition on each of these issues was suppressed and derailed as the Democrats focused their campaign against Trump exclusively on matters of foreign policy. In particular, they centered their opposition on the concerns within dominant factions of the military and intelligence establishment that Trump was not pursuing the fight against Russia with sufficient vigor.

Even before the election, the Democrats began concocting the narrative that Trump’s election campaign was the focal point of a massive conspiracy directed from the Kremlin and Russian President Vladimir Putin to “undermine our democracy” and “sow divisions” within the United States.

The anti-Russia campaign assumed hysterical dimensions, comparable only to the McCarthyite rants of the 1950s and the anti-Communist conspiracy-mongering of the John Birch Society. The Democrats turned unsubstantiated claims that Russia spent a few hundred thousand dollars on social media advertisements—a tiny fraction of the billions spent by corporations and the rich on the presidential campaigns—into lurid allegations of a “Russian plot” against America, in which Trump served as the puppet of Putin.

Throughout this process, the Democrats’ relation to Trump had a schizophrenic character. While they bitterly opposed the administration on foreign policy matters affecting the strategic interests of American imperialism, they were—and remain—eager to work with him on key elements of ruling-class policy on which they agree, particularly on social and economic policies to continue the enrichment of the financial oligarchy.

This began with President Barack Obama’s declaration immediately after Trump’s election that his “number-one priority” was to “facilitate a transition that ensures our president-elect is successful.” Obama coupled this with the declaration that the election was an “intramural scrimmage” between two sides “on one team.” The Democrats then collaborated with Trump in ensuring passage of his corporate tax cuts, his attacks on immigrants, his record military budgets and his aggressive actions against Venezuela, China and other countries.

Terrified of and opposed to any mass popular movement against Trump, the Democrats sought to pursue their conflict with the White House using the methods of a palace coup—behind-the-scenes maneuvers involving the intelligence agencies and disaffected factions within the state.

The Democrats have utilized the anti-Russia campaign to press their own demands for the suppression of free speech (in the name of combating “fake news”) and to legitimize their persecution of WikiLeaks founder Julian Assange for exposing the crimes of American imperialism.

Following the failure of the investigation into Russian “meddling” led by former FBI director Robert Mueller, the Democrats launched the impeachment campaign to continue their operation. The supposed “quid pro quo” alleged against Trump—the basis of the abuse of power charge—involved temporarily holding up military aid to the Ukrainian government, which is involved in a military conflict with Russian-backed forces in eastern Ukraine.

The methods employed by Trump’s opponents within the state are determined by the social and political interests motivating them. The Democratic Party is a party of Wall Street and the military and intelligence agencies, aligned with privileged sections of the upper-middle class that pursue their interests through the politics of racial and gender identity.

The Democrats’ palace coup has ended in a debacle. Now it is the socialist movement against Trump that must be developed. It is one thing for Trump to prevail against his reactionary and cowardly opponents in the Democratic Party. It is quite another for him to take on the growth of the class struggle.

The Socialist Equality Party launched its presidential campaign to build a revolutionary socialist leadership in the working class. Over the past two years, mass struggles have erupted in the United States and internationally. This is the social power that can bring down the Trump administration, end imperialist war, stop the drive to dictatorship and fascism, and put an end to capitalist exploitation and inequality.

The movement of the working class must be guided by a conscious socialist, revolutionary and internationalist program and perspective. We call on all workers and young people to support the Socialist Equality Party in the 2020 election and make the decision to join the SEP and its sister parties in the International Committee of the Fourth International.

For more information on the SEP election campaign and to sign up, visit socialism2020.org.

The 2020 SEP US Election Campaign