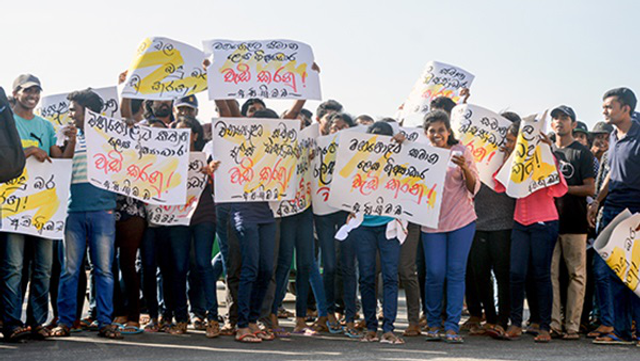 The media published articles on the significance of Independence Day, but cautiously covered up the deplorable record of the more than seven decades of capitalist rule in Sri Lanka.

A one-page article in the Daily Mirror headlined “72 years after independence, where are we now?” noted: “When we gained Independence it was the classic model of moving up towards prosperity. Alas, it did not work out that way…”

Referring to the social inequality between rich and poor, regional economic disparities and corrupt politicians, the columnist insisted, however, that “despite many stresses and strains over the years, [the country] has survived, and even at times, flourished.”

A Sunday Times editorial asked, “Is there much to celebrate?” and disingenuously answered, “Despite the criticism, and some nostalgically yearning for the past, the country’s positives are many.”

Notwithstanding the propagation of these false hopes, there was no semblance of enthusiasm for Independence Day amongst workers and the poor. On the contrary, Colombo’s streets, over the past weeks, have seen thousands of young workers and students demanding their rights. 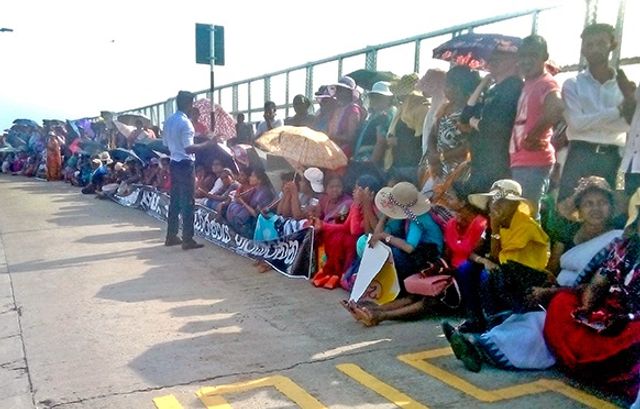 Last week alone, thousands of workers from the Petroleum Corporation, housing and archaeology departments, the dengue eradication campaign and trainee teachers, demonstrated outside the Presidential Secretariat. These workers have been sacked by Rajapakse’s new government over the past two months. A day before the February 4 celebration, and the day after it, thousands of students marched in Colombo demanding job guarantees and decent education facilities.

These demonstrations are a continuation of protests and strikes that began under the previous unity government of President Maithripala Sirisena and Prime Minister Ranil Wickremesinghe. Confronted with this rising social opposition, the discredited government was torn apart.

Rajapakse and the Sri Lanka Podujana Peramuna exploited this popular opposition, whilst at the same time stepping up their communalist propaganda against the Tamil and Muslim communities. Every faction of the Sri Lankan ruling elite uses communalism to try and divide the working class and the poor.

Promising to establish “strong and stable” rule for big business, the Sri Lankan president is militarising his administration, appointing senior officers from the armed forces to key posts, in preparation for intense class war against the working class.

The struggles now erupting, in fact, are an expression of the seething anger of workers, youth and the poor over their lack of basic social and democratic rights, demands that the ruling class has never been able to address. 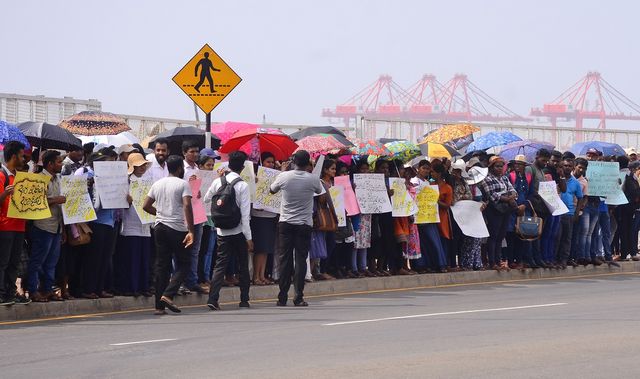 Thousands of petroleum corporation and other workers demonstrating in Colombo

Seventy-two years ago, the Sri Lankan ruling elite did not win independence in a “bloodless struggle” against British imperialism, as it falsely and shamelessly claims.

In 1946, the Sri Lankan elite, organised in the Ceylon National Congress, which later formed the right-wing United National Party (UNP), did not even demand independence, but called for Dominion Status under the British Crown. The political arrangements for transferring power into the hands of the local ruling elite were organised in a conspiracy with the colonial masters in London and against the insurgent Sri Lankan workers.

In 1947, British imperialism, which faced a rising revolutionary upsurge of workers and the poor in India, collaborated with the leaders of the Indian National Congress and the Muslim League to partition the sub-continent and create a Hindu India and a Muslim Pakistan, in the name of “independence.” The partition provoked communal violence, in which millions were killed. The Stalinist Communist Party of India supported this reactionary carve-up.

The Bolshevik Leninist Party of India (BLPI), the then section of the Fourth International on the Indian subcontinent, exposed the fake character of so-called independence in the region, explaining that it was imperialism’s transition from “methods of direct rule to methods of indirect rule.”

In a statement on Sri Lanka issued on February 4, 1948, the BLPI declared: “Will there be anything for the masses of this country to celebrate? The BLPI’s answer to the above question is a clear and unequivocal No! … [T]he new status of [what they obtained] is not ‘independence’ but actually a refashioning of the chains of Ceylon’s slavery to British imperialism.” 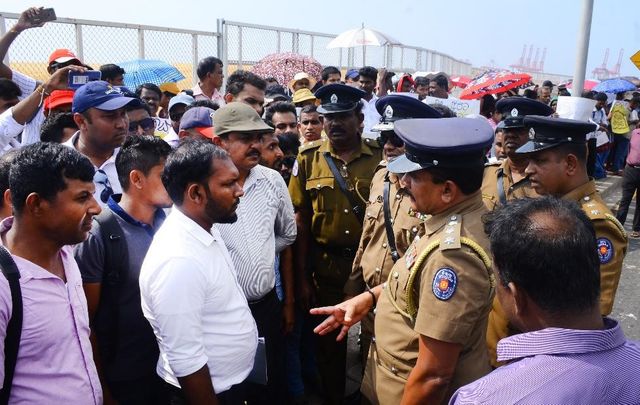 In 1950, although the BLPI entered the Lanka Sama Samaja Party (LSSP), which also claimed to be Trotskyist but had a nationalist orientation, its powerful prognosis was confirmed in the ensuing decades.

The first act of the new UNP government was to abolish the citizenship rights of more than one million Indian-origin Tamil plantation workers. This deliberate act was aimed at whipping up anti-Tamil chauvinism to divide the working class. And, as the crisis of the ruling elite deepened, the poison of Sinhala chauvinism was also intensified.

Immediately after the August 1953 nationwide semi-insurrection of workers, which was supported by the rural poor, the newly-formed Sri Lanka Freedom Party (SLFP) began its reactionary “Sinhala only” campaign, to make Sinhala the country’s official language.

The political degeneration of the LSSP, and its adaptation to the crisis of the Sri Lankan ruling elite, helped the capitalist parties to whip up this chauvinism.

In 1964, as workers rallied, across ethnic lines, around 21 demands, the LSSP betrayed the principles of socialist internationalism and joined the SLFP government of Prime Minister Sirima Bandaranaike. The LSSP’s political betrayal was prepared by the opportunist faction of the Fourth International, led by Michael Pablo and Earnest Mandel, which had broken from Trotskyism.

The LSSP leadership played a prominent role in the 1972 constitution, imposed by the SLFP-LSSP-Stalinist Communist Party coalition government. The constitution further entrenched communalism, conferring Buddhism as the state religion and Sinhala as the official language.

The LSSP’s betrayal helped the emerging Janatha Vimukthi Peramuna (JVP) gain ground among rural youth. Preaching an ideological mixture of Castroism, Maoism and Sinhala patriotism, the JVP diverted rural youth away from the working class. The LSSP’s treachery also dashed the hopes of Tamils in the working class, and paved the way for the Liberation Tigers of Tamil Eelam (LTTE) to win a hearing for separatism among the Tamil population.

The discredited right-wing UNP was able to exploit opposition to the coalition government and the LSSP’s betrayals in order to come to power in 1977.

Maintaining the government’s “free market” policies, Jayawardene systematically whipped up anti-Tamil communalism and, in 1983, provoked the war that devastated the country for nearly three decades.

From 1988 to 1990, President Premadasa’s UNP government responded to the JVP’s fascistic campaign against its political opponents and the working class, by unleashing military, police and death squads to suppress the rural youth. About 60,000 young people were killed during this brutal repression.

The final years of this bloody conflict took place under former President Mahinda Rajapakse, with Gotabhaya Rajapakse as his defence secretary. The war ended in May 2009, with the final weeks, according to UN estimates, claiming the lives of some 40,000 unarmed Tamil civilians.

Today, de-facto military rule and occupation continue in the North and East, where the majority of Tamils live.

According to official data, the richest 20 percent in Sri Lanka hold 52.8 percent of total household income, with the poorest 10 percent receiving only 1.8 percent. Expenditure cuts to public education and health are increasing, while private education institutions and hospitals earn ever-increasing profits.

Above all, imperialism’s grip on the country is tightening, with the connivance of every faction of the ruling elite. In 2015, the US-orchestrated a regime-change operation to oust Sri Lankan President Mahinda Rajapakse and bring Sirisena to power. Washington considered Rajapakse too close to China, and insisted on Sri Lanka lining up behind the US military plans against China.

This political operation was backed by the pseudo-left, the JVP and the Tamil National Alliance (TNA). The TNA has openly declared its readiness to serve US geopolitical interests, in exchange for privileges from the new Rajapakse government.

President Gotabhaya Rajapakse has been served notice by President Donald Trump and Secretary of State Mike Pompeo not to deviate from Sri Lanka’s military integration with the US and its build-up towards war against China. Moreover, India, under both the former Congress government and the current regime of Prime Minister Narendra Modi, has been transformed into a frontline state for Washington’s war plans against Beijing.

On February 4, Prime Minister Mahinda Rajapakse issued a statement declaring that there was “some cause for satisfaction” in Sri Lanka. “We are now on the cusp of a golden era once again.”

This is an outright lie. The new Rajapakse regime, like its counterparts around the world, is rapidly adopting authoritarian methods to take on the increasingly militant working class.

Seventy-two years of brutal rule by the Sri Lankan capitalist class have, once again, confirmed Leon Trotsky’s Theory of Permanent Revolution. The capitalist classes in the countries of belated capitalist development are incapable of freeing themselves from imperialism or addressing and resolving critical social and democratic tasks.

The Socialist Equality Party, Sri Lankan section of the International Committee of the Fourth International, has fought, since its inception in 1968 as the Revolutionary Communist League (RCL), for the political independence of the working class based on an international socialist perspective. On this basis, the SEP fights for a Sri Lankan and Eelam Socialist Republic, as part of a Union of South Asian socialist republics. We urge workers and youth to join this struggle.