Armed and baton-wielding police commandos were deployed on February 6 against sacked Dengue Eradication Campaign workers who were demonstrating outside the presidential secretariat. The young workers were forced by the police into a government-designated “Agitation Site” at nearby Gall Face Green in central Colombo. The operation was a clear exposure of President Gotabhaya Rajapakse’s “freedom” posturing during his Independence Day speech, two days earlier. 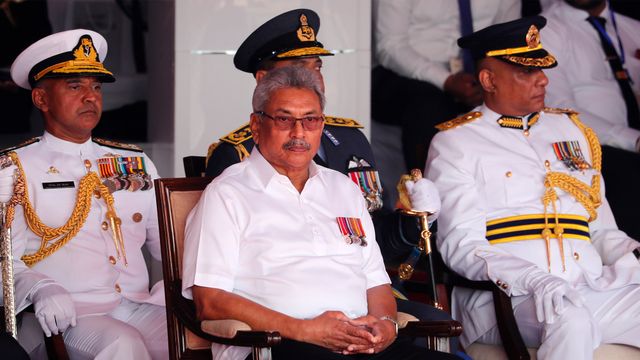 The Dengue Eradication Campaign workers are among 15,000 employees recently sacked by the Rajapakse government, which claims that the previous administration “irregularly” hired them.

Thousands of the sacked workers from the Ceylon Petroleum Corporation, housing and archeological departments and trainee teachers, as well as pensioners and tertiary students, have demonstrated outside the presidential secretariat in the past weeks. Protest leaders have been allowed to meet Rajapakse’s staff but none of their demands have been resolved.

A few days earlier, Rajapakse’s office had issued a statement declaring that the protests were an “inconvenience to the general public” and that demonstrators should wait until their problems were solved by the government. Police then declared that the “Agitation Site” had been established and that all demonstrations should be held at that location.

A day after police forced protestors into the “Agitation Site,” President Rajapakse, surrounded by his security officers in civilian clothes, met with the Dengue Eradication workers at this location. He told them they could apply for a program he has initiated to “solve” unemployment. 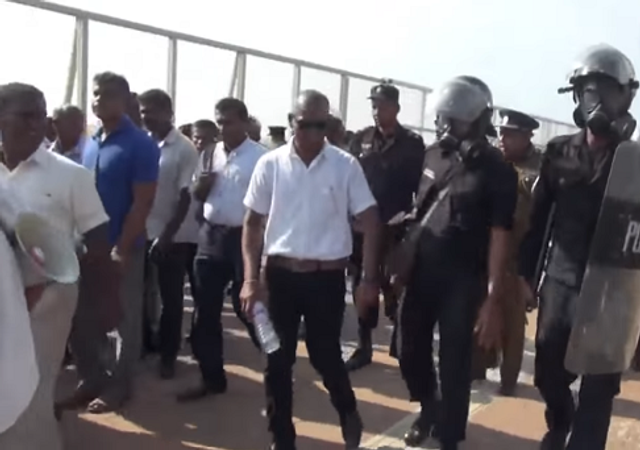 The sacking of the Dengue Eradication workers and other government employees, and the police action against them, is warning that the Sri Lankan president will not tolerate any challenge to his big-business, cost-cutting agenda.

Sri Lanka’s mainstream media lavished praise on Rajapakse’s “Independence Day” speech. A Daily Mirror editorial proclaimed that Rajapakse had “pledged to ensure the rights of all Sri Lankans to think freely, hold independent opinions and express themselves without hindrance.”

Likewise, an editorial in the Island highlighted the same lines from Rajapakse. It claimed that the president wanted to prove wrong those critics who claimed that he would be a “dictator, who would suppress all the democratic rights of the people.”

Even as the Sri Lankan media published these hosannas and approvingly reported the establishment of the government-designated “Agitation Site,” the press barely mentioned the baton-wielding police commandos, who were ready to use their water-cannon equipped vehicles and tear gas if the demonstrators resisted. 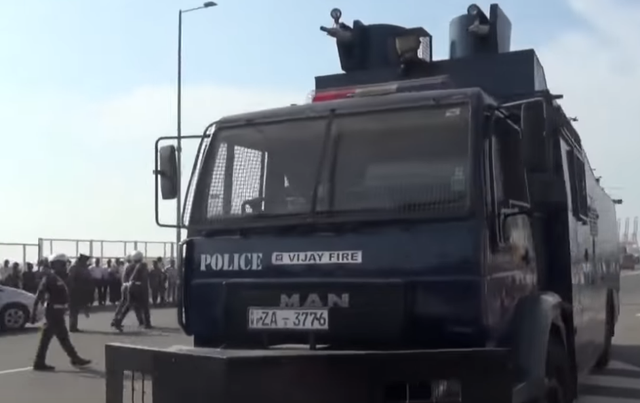 Notwithstanding the media praise for Rajapakse’s speech, the new president made clear that he and his government would not tolerate any mass opposition.

“[I am] working towards fulfilling the needs of the people of this country,” he declared and added, “I do not envisage public officials, lawmakers or the judiciary to impede my implementation of this commitment.” This is a language of autocratic rule.

Gotabhaya Rajapakse was Sri Lankan defense secretary from 2005 to 2014, under his brother and President Mahinda Rajapakse and during the final defeat of the separatist Liberation Tigers of Tamil Eelam (LTTE) in May 2009. According to UN estimates, 40,000 Tamil civilians were killed in the final battles. Ex-colonel Rajapakse, wearing all his medals—including those from the bloody war against the LTTE—saluted a passing parade of marching soldiers and police officers.

Rajapakse also promoted 17 brigadiers to the rank of major general on Independence Day. These included Brigadier Deshapriya Gunawardana, who has been accused of leading a military operation against innocent civilians that killed three young people at Rathupaswala in 2013. Gunawardana is one of several officers who have been indicted by the attorney-general’s department and faces an ongoing court case.

Three weeks ago, Rajapakse made former navy spokesmen, D.K.P. Dassanayake a rear admiral. He is one of the main individuals facing a high court case over accusations of his involvement in the abduction 11 youth for ransom during the war. The youth were tortured and murdered.

During his speech Rajapakse reiterated his commitment to a “unitary state”—the political and legal formulation used by successive Sri Lankan governments over the past 72 years to justify official racist discrimination against Tamils, Muslims and other minority communities.

“I am committed to protecting and nurturing the Buddhist philosophy of this country during my tenure,” he declared. He demagogically claimed that he is “not bound to serve only the interest of the people who voted for him.”

During the last November’s presidential elections Rajapakse, who is hated for his ruthless persecution of the war against LTTE, was rejected by all Tamil constituencies in the country’s North and East.

Rajapakse cynically claimed—no less than seven times—that he would guarantee “freedom to media” and “right to live freely.”

Last December, however, he threateningly told media heads: “I expect all media institutions to fulfill their responsibilities on behalf of the country and engage in media reporting that will enhance the country’s prestige.”

The president’s Independence Day speech also contained a thinly-veiled threat against social media, which Rajapakse’s claimed “creates situations where people are misled by false information.” He threatened to act against “extreme organisations that pave the way for terrorism and further dysfunction in the country.”

In other words, the new president is attempting to create the conditions to crack down on any organisation he defines as “extremist”—i.e., anti-establishment left-wing political formations, workers’ independent organisations and socialist-minded workers.

Rajapakse has maintained the national mobilisation of the military and “anti-terror” emergency regulations established by former President Maithripala Sirisena after last year’s Easter terrorist attacks. He has also appointed retired military officers to oversee ministries and corporations which were normally considered as civilian affairs. He and his government have made clear that it will impose International Monetary Fund’s austerity to slash the fiscal deficit, privatise or commercialise state-owned enterprises and cut subsidies to the poor.

Colombo has already curtailed all government capital expenditure, demanded government bodies implement cost-cutting measures, and cancelled salary and pension rises given by the previous government, claiming these increases were “irregular” and that there are no funds in the treasury.

Having carried out these attacks, Rajapakse cynically declared in his speech that “eradication of poverty” is “the priority of our government.”

Contrary to these claims, Rajapakse and his government are preparing for authoritarian forms of rule and mass repression against the inevitable eruption of working-class struggles against his big-business regime and its austerity measures.