The former chief minister of Sri Lanka’s Northern Provincial Council and the leader of the Tamil People’s Alliance (TPA), C. V. Wigneswaran, has issued a statement on President Gotabhaya Rajapakse’s recent claim that those missing during the war against the separatist Liberation Tigers of Tamil Elam (LTTE) are “actually dead.”

The entire statement is aimed at derailing a campaign by ordinary people who were demanding justice over missing persons, to a futile appeal to Rajapakse, the UN and the major powers, including the United States. 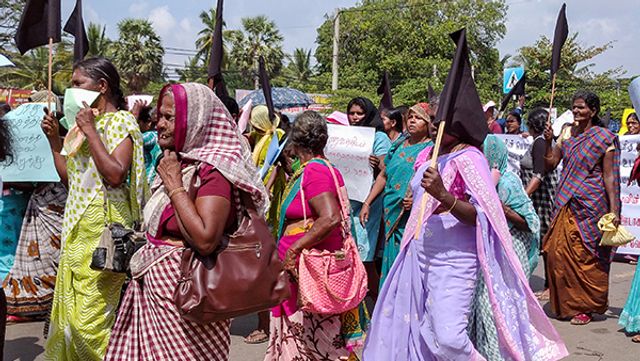 Protest march in Kilinohchi by relatives of missing persons

Wigneswaran’s statement came amidst growing opposition among Tamil people over Rajapakse’s claim, insisting that he reveal what happened to these people.

In a meeting with UN Resident Coordinator Hanaa Singer, on January 17, President Rajapakse made the extraordinary admission that “these missing persons are actually dead.” More than 20,000 went missing during the war.

Most of them were “disappeared” after being arrested, or abducted into white vans, by the security forces and associated death squads. Relatives of these missing persons have been continuously protesting for more than three years, in order to obtain information about their loved ones. Most went missing after mass arrests and either surrendered or were handed over to the security forces after the LTTE’s military defeat in May 2009.

In his statement issued on January 24, Wigneswaran cynically appealed to the very president implicated in these war crimes. He said: “The president must inform the UN, the Human Rights Council, the international community and the people of the country, when and where and by whom these missing people were assassinated.”

Earlier, Rajapakse had denied that anyone had gone missing during the war—and other military officials backed him up.

No-one, however should be surprised at Rajapakse’s claim. He was defense secretary at the time, and presided over the final brutal assaults on the LTTE. His brother, Mahinda Rajapakse, was president, defense minister and commander-in-chief of the armed forces.

Wigneswaran also insists that the Tamil National Alliance (TNA) parliamentarians should “immediately bring the matter to the member states of [UNHRC] and discuss the need to handover our issues to the International Criminal Court.” He was referring to the October 2015 UNHRC resolution on Sri Lanka, co-sponsored by the US and Sri Lanka.

Washington fully backed Rajapakse’s brutal military assault, and only turned against him as relations with Beijing were developing. The US pushed several resolutions in the UNHRC, demanding a Sri Lankan war crimes investigation, in order to pressure Colombo to distance itself from China. Then, in the 2015 presidential elections, Washington organised for Maithripala Sirisena to come to power.

Since the Sirisena and Prime Minster Ranil Wickremesinghe government took office, the US has changed its hypocritical stance on human rights. In September 2015, in a program entitled “Promoting Reconciliation, Accountability and Human Rights in Sri Lanka,” it allowed the Sri Lankan government to hold its own inquiries into the country’s war crimes.

A TNA leader, M.A. Sumanthiran, flew to New York to meet then US deputy envoy to the UN, Michele. J. Sison, to finalise this resolution.

From the outset, the interest of the US—the most dangerous war criminal on the planet— in Sri Lanka’s war crimes was bogus. It was using human rights violations, in this case, to integrate Sri Lanka into its aggressive military preparations against China.

After dragging its feet for two years, the Sirisena-Wickremesinghe government established a so-called Office of Missing Persons (OMP) to collect information about the disappeared. However, protesting relatives of the disappeared rejected the OMP as nothing but a useless exercise.

Wigneswaran failed to accuse Rajapakse for his responsibility in relation to the missing family members. Nor did he demand legal action against the perpetrators. Instead, he absurdly requested that the president “make it clear why he did not call the military and ask what happened to those they took away.” The Tamil leader thus let Rajapakse off the hook regarding his responsibility for the disappeared.

He has also recommended that an inquiry by Rajapakse would “bring peace of mind” to the relatives of the missing people, and that such “an act of accountability would lead to reconciliation.”

The reconciliation suggested by Wigneswaran is an appeal to the Colombo political establishment for more administrative powers to be granted in the north and east to the Tamil bourgeoisie. Wigneswaran, like the leaders of other Tamil parties, including the TNA, is using the plight of Sri Lanka’s war victims to gain sops from Colombo. Their appeal to the major powers is aimed at winning backing to bargain with Colombo for the devolution of powers, in order to jointly exploit the Sri Lankan working class.

Wigneswaran utters not a word about Rajapakse’s steps to militarize the administration. Along with other Tamil parties his TPA makes no demands for the withdrawal of the military from the north and east, which has occupied the region for nearly four decades.

Wigneswaran is a retired Supreme Court judge who has been absorbed into the reactionary political establishment. Although he was not even a member of the party, the TNA appointed him as a chief ministerial candidate in the 2013 provincial council elections as a respectable man, who could deal with both the Colombo government and international powers.

As the hostility towards the TNA deepened among the Tamil masses after it had functioned as a de-facto partner of the pro-US Sirisena-Wickremesinghe government, Wigneswaran formed his own party—the TPA—as another Tamil communal party, claiming to offer an alternative.

The differences between Wigneswaran and the TNA, however, are purely tactical, not fundamental. Both parties have been exploiting the plight of the Tamil war victims and give their support to the geopolitical drive by Washington and India against China.

Over the past several years he has increasingly been whipping up Tamil communalism. Together with several other communal parties, he organised the rabidly nationalist “Rise up Tamils,” Eluka Tamil, movement.

This communal campaign is a response to the deepening unrest among workers and the poor, who have been demanding justice, and against any further deterioration of social conditions as the Colombo government unleashes the International Monetary Fund’s austerity program.

Workers in the north and east have participated jointly in strikes and protests, along with Sinhala and Muslim workers. Like the Colombo establishment, the TPA, TNA and the other Tamil groups are terrified by these united struggles, as they open avenues for the independent mobilisation of working class.

Like the disappearance of Tamils during the war, the 1988-1990 terror, unleashed by the United National Party government to suppress growing rural unrest, the Sri Lankan security forces and death-squads dragged Sinhala youth from their homes, murdering around 60,000.

The Tamil masses cannot rely on the US and its drive to war around the world. Nor can they rely on the US’s regional “ally,” New Delhi, which has unleashed brutal repression against Muslims in Kashmir, after a lockdown throughout the region imposed direct rule by the central government. The United Nations has been the centre of such political conspiracies by the major powers.

The population in Sri Lanka’s north and ease should reject Tamil nationalism and unite with the Sinhala and Muslim workers to overthrow capitalism, the root cause of war and oppression. This can be only achieved in the struggle for a Socialist Republic of Sri Lanka and Eelam as part of the struggle for socialism in South Asia and internationally. Only the Socialist Equality Party fights for this perspective.