More than 3,000 Tongans, including members of the Pacific country’s royal family, attended the state funeral of Prime Minister ‘Akilisi Pohiva in the capital Nuku‘alofa last September. Another 2,000 attended a memorial service in Auckland, New Zealand. Pohiva, aged 78, died in Auckland Hospital after suffering pneumonia. He had been in poor health for some time. 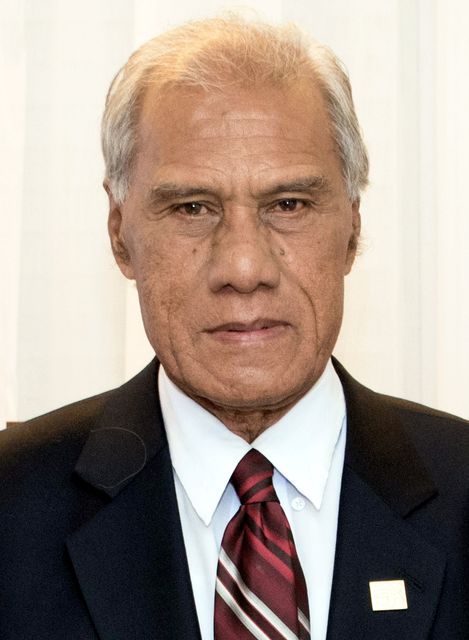 Pohiva, who had served as prime minister from 2014, was a significant figure in Pacific politics for several decades. A former school teacher, he led Tonga’s so-called pro-democracy movement, which aimed to establish a more representative parliament within the tiny kingdom’s authoritarian feudal monarchy.

New Zealand Prime Minister Jacinda Ardern said Pohiva would be remembered for his “lifelong commitment to championing democracy.” Other tributes came from Frank Bainimarama, Fiji’s prime minister and former military coup leader, who praised Pohiva’s recognition of “the urgency of climate action,” and the NZ pseudo-left group Organise Aotearoa, which hailed him as a “powerful progressive leader.”

In fact, Pohiva’s successive governments represented a privileged layer of business owners and the upper middle class, and proved totally incapable of meeting both the democratic aspirations and basic social needs of the vast majority of the population, which numbers 108,000.

The indigenous Tongan monarchy is said to date back 1,000 years. The ruling family claims its heritage from King George Tupou I who converted to Christianity under the influence of Wesleyan missionaries and united Tonga’s 170 islands in 1845. In 1900, a “treaty of friendship” with Britain was signed, which gave Britain control of foreign affairs, and kept out other predatory powers. 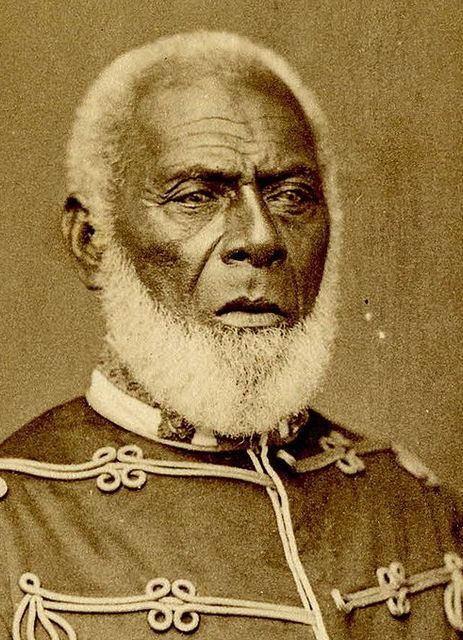 The treaty remained until 1970, when Tonga became formally independent. Throughout its 175-year modern history, the royal family, supported by a layer of chiefly “nobles” and the churches, has ruled Tonga in a dictatorial manner, maintaining a lavish lifestyle while overseeing the impoverished and disenfranchised population.

There was no “reform” under Pohiva that made any positive difference to ordinary Tongans. Today the monarchy remains firmly in charge, despite constitutional changes in 2010 that made a majority of parliamentarians elected, rather than appointed by the King and 33 chiefly “nobles.” A feudal land system still sees land ownership allotted by the nobles to selected families, and women barred from owning land.

Since riots in 2006 decimated central Nuku‘alofa, followed by the 2008 global financial crisis, the Tongan economy has continuously deteriorated, with entrenched poverty and social crisis, including a methamphetamine epidemic and high levels of non-communicable diseases. 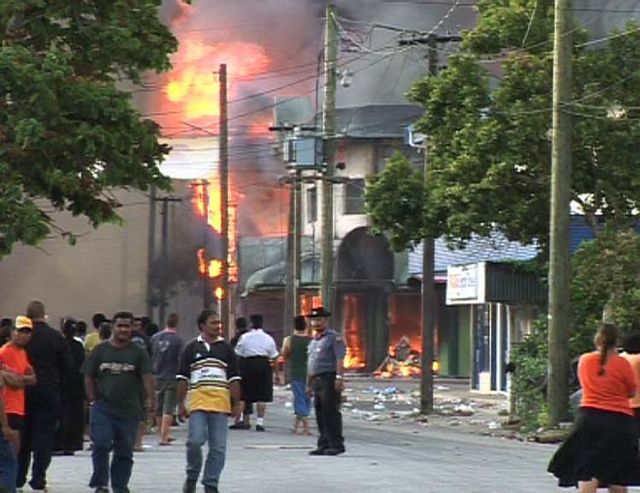 The start of the major fires due to the 2006 Tonga riots in Nukuʻalofa [Source: Wikimedia Commons]

Three decades of Pohiva’s “pro-democracy” movement confirms that the working class and rural poor, both in Tonga and across the Pacific, can achieve democratic rights and decent living standards only armed with a socialist program.

The “pro-democracy” movement emerged in the mid-1980s, supported by sections of the state bureaucracy and businesses. As historian Ian Campbell noted, “demands for reform were modest—the typical requests of a new elite for less hereditary privilege and a sharing of power.” Pohiva and others concentrated on criticising corrupt practices, like the sale of Tongan passports to foreigners and wasteful spending on ministerial travel. [1]

Pohiva’s role as a protest organiser saw him fired from the public service. Posturing as an opponent of the privileged elite, he gained a popular following and was first elected into parliament in 1987. He told Radio NZ that year: “The existing system is very much like a dictatorship... People have no voice in the present government and we need more representatives of the people.” 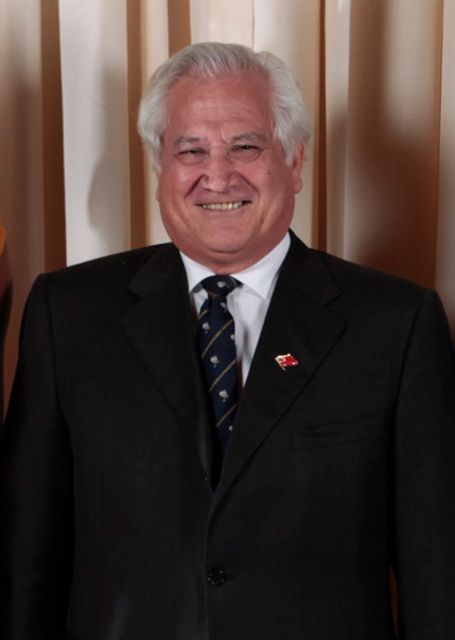 However, there were never proposals to abolish the monarchy and nobility. Feleti Sevele, a key figure in the “pro-democracy” movement, wrote in 1987 that to do so “would be tantamount to stripping off some of the most fundamental and stabilising elements of Tongan society.”

Reflecting the aspirations of the growing entrepreneurial class, Sevele called for “a greater proportion of aid” from New Zealand and Australia to be directed to “the private sector,” including fruit exporters and light manufacturing, “rather than to government and quasi-government agencies.” [2]

In 2005, after decades of stagnation and rising inequality, the government was shaken by a public service strike over low wages, which escalated into a demonstration by 10,000 people demanding democracy. In response, the monarchy promised reform and Sevele was appointed the first non-noble prime minister in 2006 after becoming a close friend of Prince Tupouto’a, later King George Tupou V.

Pohiva initially supported Sevele, but soon grew frustrated with the government’s refusal to include him and other “pro-democracy” leaders in decision-making. According to journalist Kalafi Moala, Pohiva formed alliances with “people who used to be supporters of the royal family and government but had been embittered for one reason or another,” including former Police Minister Clive Edwards, former Superintendent of Prisons Semisi Tapueluelu, and businessman Uliti ‘Uata. [3]

The November 2006 riot, which followed speeches delivered to a rally by Pohiva and his right-wing allies, destroyed businesses owned by Sevele, and the royal family, as well as Chinese-owned businesses which sections of the Tongan petty bourgeoisie viewed as rivals. Australia and New Zealand dispatched armed forces to restore “order” and protect business interests. Pohiva was charged with sedition over the riot, but the charges were dropped in 2009.

Moving to defuse deepening opposition to the entire ruling set-up, Sevele and King George V promised more democratic elections in 2010: for the first time the majority of the legislature, 17 out of 26 seats, would be elected by the people, a move which was hailed internationally as a democratic transition. The nobles, however, retained 9 seats, while their Privy Council exercised extraordinary veto powers over legislation.

Significantly, New Zealand and Australia helped fund the “reform” process. The two regional imperialist powers, Tonga’s main source of foreign aid, had supported the absolute monarchy for decades but became increasingly concerned about popular unrest. Canberra and Wellington also demanded pro-business measures, including the withdrawal of the royal family from business ventures, government spending cuts and the privatisation of assets.

After a term in opposition, Pohiva was finally elected prime minister by MPs following the 2014 election. In 2017 however, King George VI showed the monarchy’s entrenched power by dissolving parliament, triggering a new election. The nobles opposed the government’s decision to ratify a United Nations women’s rights treaty, changes to the education system, and the dismissal of three cabinet ministers, including one who was convicted of bribery.

Pohiva benefited from ongoing disgust with the monarchy and was re-elected in 2017. Among the population, however, there was growing disenchantment. In August 2016 Moala, the journalist who had been a media advisor to Pohiva, said the government was “failing to live up to expectations,” in particular promises to reduce poverty.

While the royal family, nobility and a small business elite has continued to live in luxury, youth unemployment is estimated at 40 percent and most families rely on subsistence agriculture and remittances from family members working abroad. Manufacturing, mainly small-scale industry and handicrafts, contributes only 3 percent of GDP. Tourism is the major source of hard currency. The monarchy and nobles have either owned or had interests in telecommunications companies, satellite services, and energy generation and distribution. Wages remain extremely low. A labourer earns just 20.97 pa’anga per day, about $US9.00. In November 2018, the Statistics Department estimated that 23 percent of adults and 33 percent of children live in poverty.

The Pohiva government continued attacks on freedom of speech, which had previously been a central issue for the “pro-democracy” movement. Pohiva had been imprisoned in 1997 for 26 days for leaking information about ministerial expenses to the Taimi o Tonga. The newspaper, Tonga’s major daily, was briefly banned in 2003 and 2004 for criticising the government. Last August, however, Pohiva himself threatened to block Facebook, as anger toward the monarchy erupted when his government abandoned further proposed constitutional reforms. This followed the forced resignation or sacking of senior journalists at the Tongan Broadcasting Commission in 2017, in apparent retaliation for criticism of Pohiva’s administration.

The government also tried to shut down ‘Atenisi University, founded in 1975 by the late Dr. Futa Helu, a supporter of the pro-democracy movement, to teach philosophy, literature, history and other courses. The institute was long seen by the monarchy as a threat for its emphasis on secularism and critical thinking. Last year the government banned ‘Atenisi from recruiting students, claiming it was not properly accredited. Following a legal battle, in November 2019 a court lifted the ban, finding that the government had no legal justification.

Notwithstanding the “pro-democracy” leaders’ quarrels with the monarchy and the nobles over the division of power and privileges, they proved to be just as fearful and hostile toward the poor and working people, and just as tied to imperialist powers. Pohiva displayed contempt for the poor, telling parliament in June 2019 that “the main cause of hardship in Tonga includes slothfulness and dependent lifestyles.” 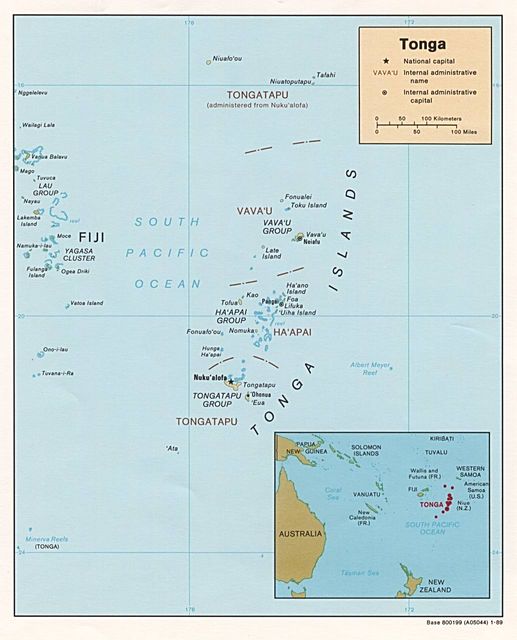 A map of the South Pacific, showing the location of the Tongan islands [Source: Wikimedia Commons]

Tonga is increasingly caught up in global geo-political tensions and rivalries. Canberra, Wellington and Washington are all seeking to confront China’s influence in the Pacific, including Tonga. Incapable of pursuing an independent path, Pohiva’s government turned to Beijing for financial aid, and joined Beijing’s international Belt and Road infrastructure initiative, while at the same time maintaining ties with Australia and New Zealand, which control much of the judicial system and carry out regular military exercises with Tonga.

In December 2017, the International Monetary Fund increased Tonga’s debt distress rating from moderate to high risk, citing its vulnerability to natural disasters and noting that upcoming loan repayments to China would reduce Tonga’s foreign exchange reserves, double its debt-servicing costs, and could force the country to borrow yet more money.

The experience of Pohiva’s movement confirms the key tenets of Leon Trotsky’s Theory of Permanent Revolution: including that in countries of belated capitalist development the bourgeoisie is incapable of carrying out a democratic revolution. Trotsky, the leader alongside Vladimir Lenin of the Russian Revolution in 1917, explained that only a socialist and internationalist revolution led by the working class and supported by the peasantry can bring about genuine democracy.

The Tongan working class and rural poor can achieve democratic rights and decent living standards only with a program to abolish the monarchy and the capitalist profit system and reorganise society along socialist lines. New organisations must be built to fight for the complete political independence of the working class from all the parties and representatives of the ruling elite.

This requires a movement that is international in scope—none of Tonga’s urgent problems can be resolved within Tonga alone. Only through a unified struggle with workers throughout the Pacific, Australia, New Zealand and other countries can the working class in Tonga end neo-colonial oppression and gain control over the productive capacity and resources it requires to answer its social needs and those of the rural poor.

The way forward in Tonga and across the Pacific is the establishment of sections of the International Committee of the Fourth International, the world Trotskyist party and publisher of the World Socialist Web Site.