After Transport Workers Union sell out of contract struggle

New York’s Metropolitan Transportation Authority (MTA) issued nearly $1.5 billion in new bonds in the first three weeks of 2020. The issue of the bonds was necessary to fund the MTA’s capital plan for maintenance and expansion of the largest mass transit system in the US. 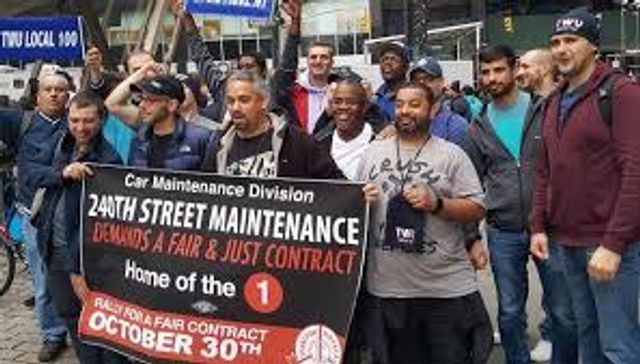 The issuing of the bonds highlights the crisis the transit system is in. They add to the already massive $44 billion debt that the authority has racked up to pay for the repairs and modernization to what is, in many cases, a 116-year old infrastructure. Some of the transit system is on the verge of collapse and constitutes a danger to commuters on the subways, buses and two suburban commuter lines. MTA subways and buses carry an average of 8 million passengers each weekday.

In December, the transit authority approved a $17 billion 2020 budget for day-to-day operating expenses, which will run a deficit of at least $1 billion by 2022.

The MTA issued the bonds immediately after Transport Workers Union (TWU) Local 100 imposed a concession-ridden contract on 37,000 transit workers. The union agreed to givebacks in medical benefits, sick time and the use of contractors. In addition, TWU will play a central role in enforcing transit workers’ productivity. MTA officials felt secure to issue the bonds after the TWU had agreed to a series of cost-cutting measures designed to ensure the flow of payments to the Wall Street investment firms that hold the transit system’s bonds.

Cuts in federal and state funding have forced the MTA to become ever-more dependent on the bond market. Bonds are essentially loans from Wall Street financial institutions that allow bondholders to collect tax-free interest or dividend payments before getting the principal back after a select number of years.

In 2018, Moody’s Investors Service changed the outlook on the MTA’s A1 rating to negative, complaining that the system faced “relatively inflexible labor costs, high leverage, large capital needs and growing public pressure to improve service and limit fare increases.” The new labor agreement, along with planned fare hikes, are aimed at bolstering the confidence of investors that they will be paid on time and in full.

From 2008 to 2018, the agency’s debt has increased from $26 billion to over $40 billion. The MTA bosses have forecast that at least $50 billion more will be needed in the next decade to conduct necessary infrastructure repairs and improvements. In 2018, debt service (the amount set aside to cover returns to investors on issued bonds) amounted to over 16 percent (or $2.6 billion) of the MTA’s annual expenditure.

Democratic Governor Andrew Cuomo’s congestion pricing plan adds a surtax to commuters who drive their cars into Manhattan, in what amounts to a regressive tax to fund the MTA and reduce debt. Many, if not most of these commuters, are not wealthy. This plan will raise approximately $1 billion in revenue annually. Cuomo and the MTA are counting on raising at least $15 billion in additional bond debt, raising the total debt to $60 billion or more by 2025.

In the last few years, the bond market has been concentrated into fewer and fewer hands. “A larger-than-ever share of municipal bonds is being managed by professionals, shaking up a market that has traditionally been the domain of mom-and-pop investors,” the Wall Street Journal noted last year.

Pointing to the speculative bubble in the bond market, a Citibank report recently noted, “The ongoing intense, prolonged rally, has led to gluttonous demand for tax-exempt paper, which has engendered strong performance, and is leading to more gluttonous demand.”

In municipalities across the US, debt functions as the lever by which the financial aristocracy enriches itself and prepares for even greater profits by privatizing public assets. According to a new report issued by Truth in Accounting (TIA) this month, New York City holds the largest debt of any municipality in the US, at $186 billion, followed by Chicago at $34 billion, Philadelphia at $14 billion and Honolulu at $3 billion. All these cities were given a debt grade of F by TIA.

Governors, state legislatures and city governments, no matter what their political party, justify their endless attacks on the wages, healthcare and pension benefits of public employees by pointing to the omnipresent rising bond-debt. In reality, this is only a direct transfer of wealth from workers and public assets into the pockets of wealthy investors.

As the World Socialist Web Site noted during the 2013 Detroit bankruptcy, “The biggest bondholders have assumed enormous power over public decisions. The appointment of an emergency manager in Detroit—an unelected official with unprecedented powers to slash the wages and pensions of city workers, gut essential services and sell off public assets—is in reality the imposition of a bankers’ dictatorship over the city.”

As a 2019 Bloomberg report noted, “The MTA is one of the most prolific issuers in the $3.8 trillion municipal-bond market. Its bonds can be found in most portfolios, especially in New York where taxes are high and there’s plenty of wealthy people looking for tax havens.”

The largest holder of MTA debt is the huge investment firm of BlackRock. The firm oversees $7 trillion in assets—more than the GDP of Japan—and runs the Municipal Opportunities Fund. This fund’s value has trebled in the last 20 years; a $10,000 investment in 1999 would have returned over $27,000 in 2019. The municipal funds’ three largest holdings are MTA-issued bond debts. The largest is the Hudson Yards Infrastructure Corporation, which is the not-for-profit that oversaw the extension of the 7-subway line.

BlackRock is one of the powerhouses of the financial aristocracy globally and plays a leading role in demanding cuts to workers’ pensions, which have been the source of mass protests throughout France for months. As the WSWS has noted, “French President Emmanuel Macron made this clear by awarding Jean-François Cirelli, the head of asset management firm BlackRock’s French operations, the Legion of Honor on January 1. By some calculations, BlackRock stands to reap over €70 billion (US $76 billion) in profits from private retirement accounts in France.” The firm plays a similar role against the German working class.

In the US, BlackRock’s political influence is widespread but particularly concentrated in the Democratic Party. CEO Laurence Fink is well known for his close ties to the Clintons. In 2016, it was widely believed he would become the treasury secretary in a Hillary Clinton administration. After Trump’s victory, he took a role in the new administration as an economic adviser. On BlackRock’s board of directors are also such Democratic Party operatives as Cheryl Mills, Hillary Clinton’s right-hand woman at the State Department when Clinton was Obama’s secretary of state.

The big investors keep a close eye on their assets. In 2018, Standard & Poor’s downgraded the MTA’s credit from A to A- meaning that the rating is now only one level above a low-grade rating. Typically, this means that investors will expect more return as compensation for lack of security. As bonds with higher returns are issued, year-on-year debt service will become a higher and higher proportion of the agency’s expenditure. The downgrading reflects growing alarm over the MTA’s ability to repay.

In the world of highly diverse investment portfolios, these funds’ concentration on the transit system signifies huge investor confidence, which appears to contradict the MTA’s subprime credit rating. However, they rely on the Democratic Party, working with the compliant and bought-off TWU, to act as its debt collector.

New York City transit workers, like millions of teachers and state and local public employees across the US are in the same situation that Detroit city workers faced in 2013, when state and city officials, backed by the Obama administration, threw Detroit into the largest municipal bankruptcy in US history. The federal bankruptcy court was used to override state constitutional prohibitions against the “impairment” of public pension benefits, leading to a precedent-setting attack on city workers.

The current TWU contract includes raises that are barely above inflation, higher out-of-pocket healthcare costs for workers and new joint labor-management schemes to pay off the TWU to increase productivity. But this is only a foretaste of what is coming.

That is why transit workers need new organizations of struggle, rank-and-file committees, which are committed to defending the interests of workers, not the profits of wealthy bondholders. These committees must fight to launch a counteroffensive to mobilize the multi-million working class in the city to oppose the diktats of Wall Street and fight for the social rights of all workers, including secure and good-paying jobs, safe working conditions, and an affordable and high quality public transit system.

This is inseparable from a political fight to expropriate the private fortunes of the super-rich and redistribute the wealth to meet human needs. To fight for this, we urge transit workers to support the Socialist Equality Party candidates, Joseph Kishore for president and Norissa Santa Cruz, in the 2020 elections and get involved in the campaign.