An audio recording was released Tuesday in which the billionaire Democratic Party presidential candidate Michael Bloomberg boasts that the “stop-and-frisk” policy he championed as mayor of New York deliberately targeted minority youth.

In the openly racist comments, made before an audience of fellow oligarchs at the Aspen Institute in 2015, Bloomberg declares that “ninety-five percent” of murderers are young minority males. 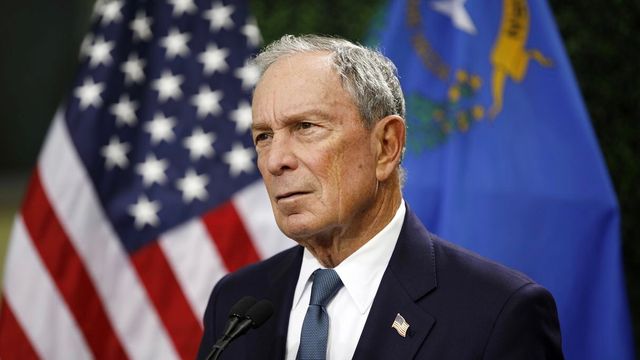 “You can just take a description, Xerox it, and pass it out to all the cops… That’s true in New York, that’s true in virtually every city,” he says. In order to bring crime rates down it is therefore necessary, Bloomberg concludes, to “put a lot of cops where the crime is, which means in minority neighborhoods.”

He adds that the best way to “get the guns out of the kids’ hands” is to “throw ’em against the wall and frisk ’em.”

These remarks are little different than the fascistic views of President Donald Trump, who has counseled the police that they should not be “too nice” to suspects when they are arresting them.

“Stop-and-frisk” empowers New York Police Department officers to stop anyone on the street without suspicion of a crime and search and interrogate the individual in public view. Under Bloomberg, the police on patrol operated as armed roving gangs, who assaulted millions of working-class New Yorkers, mostly targeting black and Hispanic men simply for walking down the street.

During Bloomberg’s time in office the number of “stop-and-frisks” rose from 92,000 in 2002 to a peak of 685,724 in 2011. All told, there were more than five million such stops during his tenure, which ended in 2013. While at a much-reduced level, in response to popular protests against the policy and lawsuits filed on behalf of victims by the ACLU, “stop-and-frisk” continues under Democratic Mayor Bill de Blasio.

The immediate response from a number of elected African-American Democrats to the exposure of Bloomberg’s racist boasts was not to call for him to bow out of the race for the White House, but rather to endorse the former Republican and Independent and boost him as the only Democratic candidate who can defeat President Donald Trump in November.

On Wednesday, Bloomberg announced the endorsement of three members of the Congressional Black Caucus: Georgia Congresswoman Lucy McBath, Congressman Gregory Meeks of New York and Delegate Stacey Plaskett of the US Virgin Islands. This was preceded by an endorsement from Illinois Congressman Bobby Rush, a former member of the Black Panthers, who had been backing California Senator Kamala Harris until she dropped out of the race in December.

Meeks, the chair of the Queens County Democratic Party, will serve as co-chair of the Mike for Black America National Leadership Council, heading up the Bloomberg campaign’s efforts to win African-American votes. “For the African-American community, it’s two things: one, beating Trump, and, two, progress and success—that we do admire people who are successful,” Meeks told City & State. Meeks added that while he didn’t “like the words that came out” in the leaked audio recording, he had been reassured by Bloomberg’s recent apologies over “stop-and-frisk.”

McBath’s support follows a $4.5 million donation from Bloomberg’s advocacy group Everytown for Gun Safety during her bid for Congress in 2018. Plaskett noted in her endorsement that Bloomberg had given generously to the US Virgin Islands in recent years and she promised that his presidency would bring “wealth creation to communities of color.”

Already the endorsements from prominent African American politicians have had their intended effect. The latest Quinnipiac poll shows that Bloomberg has risen to second place among black Democratic primary voters, with 22 percent support to Joe Biden’s 27 percent, despite not having yet appeared in a debate.

What accounts for these Democrats rallying around a candidate even as he is exposed for espousing racist views? Any other candidate caught making such clearly racist remarks would likely be forced out of the race and no apology would suffice to save his or her campaign.

While these figures claim to speak for the “black community,” they in fact represent the affluent upper-middle class, which has no empathy for the working class and poor, black or white, and is at best indifferent to the abuse minority workers and youth suffer at the hands of the police.

Aspiring, self-centered and devoid of principles, they live in awe and envy of Bloomberg and his fellow oligarchs. Determined to hold on to the wealth they have accumulated by defending the capitalist system and its ruling aristocracy, and fearful of the potential for revolt from below, they are more or less openly in support of throwing poor working-class youth “up against the wall.”

How else to deal with the howling injustices and inequities in cities such as New York, where obscene levels of wealth exist alongside grinding poverty, and ensure the safety and comfort of “people who are successful” like themselves?

Exemplifying the views of this ex-liberal layer, Harvard historian Henry Louis Gates Jr. told the New York Times Magazine earlier this month that he thought Bloomberg “could stand toe-to-toe, strongest and longest, with Donald Trump.” Noting that he attends a dinner with Bloomberg every summer in the elite vacation playground of Martha’s Vineyard, Gates declared, “I think black people want [Bloomberg], because he is smart, sensitive, strong.”

“If you want a Democrat to win, they have to know how to fight like a Republican,” MSNBC anchor Joy Ann Reid said on Tuesday, touting Bloomberg’s past political affiliation as a positive mark on his record. “He is a Republican, or used to be anyway.”

With his criminally deep pockets in mind—Bloomberg has an estimated net worth of $61 billion—Democrats are perfectly content to sweep his record under the rug. He gave millions to Democratic Congressional campaigns in 2018, has handed out grants to cities and given generous donations to local charities and churches in order to buy a base of support.

So far this cycle, Bloomberg, who is not taking individual donations, has put more than $300 million of his own money into his campaign. Attendees at his campaign events are treated to complimentary wine and canapés, while low-level campaign staffers are pulling in $6,000 a month, nearly double what the campaigns of Elizabeth Warren, Bernie Sanders and Pete Buttigieg are paying.

The growing crisis within the Democratic Party over the popularity of Sanders, a self-proclaimed “democratic socialist” who attacks the “billionaire class” and promises Medicare for All, and who won the popular vote in both Iowa and New Hampshire, together with the free-fall of the Biden campaign, has pushed many wealthy Democrats into the camp of Bloomberg. While both Klobuchar and Buttigieg have been promoted in the media as the “moderate” alternatives to Sanders, neither has the financial clout of Bloomberg.

Philip Levine, a former mayor of Miami Beach, Florida, and leading Bloomberg supporter, told the Wall Street Journal that donors are seeking ways to help the campaign and that elected officials are asking for advice on how to “tactfully retract” their endorsements of Biden and move behind Bloomberg.

The Democratic Party, virulently anti-socialist and capitalist to the bone, sees Bloomberg as the “great rich hope” who can save them from a Sanders’ nomination and suppress a growing wave of socialist sentiment, which is finding an initial and limited expression in the Vermont senator’s campaign. This includes African American Democratic officials no less than their white counterparts.

Just as the basic class issues are bringing together workers of all races and nationalities in a common struggle against international capitalism, so too are common class interests uniting, despite the relentless promotion of racial and gender politics as a weapon to divide the working class, the wealthy beneficiaries of the impoverishment of working people.

Moreover, the “stop-and-frisk” technique Bloomberg employed as mayor of one of the most unequal cities in the world is seen as a critical tool in suppressing the growing wave of social opposition and class struggle in the United States.