The BBC’s documentary flagship Panorama, “Britain’s Killer Motorways?” revealed that 38 people have been killed on “smart motorways” in the last five years. This is the case although smart motorways account for just 200 miles of the British motorway system. 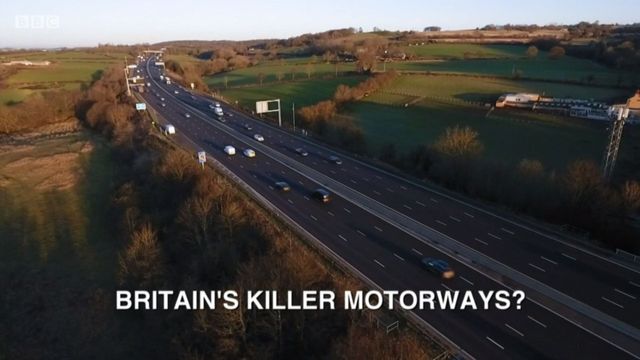 This is the first time the death toll has been revealed, giving the lie to Highways England’s claim that smart motorways are as safe as conventional motorways.

In the words of Edmund King, President of the AA (Automobile Association) breakdown and rescue service, “Smart motorways are a scandal because, as we’ve been saying from the outset, they are dangerous, they’re not fit for purpose.”

“Britain’s Killer Motorways?” which aired on January 27, reported a huge rise in near miss incidents on smart motorways. A Freedom of Information request for information on a section of the M25—a major road encircling almost all of Greater London and one of the busiest motorways in the UK—revealed that there had been 72 such incidents in the five years before it was converted to a smart motorway. The five years after that conversion saw 1,485 near misses, a more than twentyfold rise.

A “near miss” is categorised as an incident with “the potential to cause injury or ill health.” Some of the near miss footage shown by Panorama in this section of the film was horrifying to watch as to the carnage that smart motorways are responsible for. Any one of these misses could have resulted in a tragic loss of life.

Smart motorways were introduced in a cost-cutting measure, as a means of easing congestion without expanding the existing road network—by turning the hard shoulder of conventional motorways into a live traffic lane.

The scheme was piloted by the Labour government in 2006 on the M42 near Birmingham. Following this test, the plan was signed off by the Conservative-led coalition government in 2010. Smart motorways have been introduced across 200 miles of motorway so far. However, Highways England, the government company “charged with operating, maintaining and improving England’s motorways and major A roads” plans to add more than 4,000 miles of extra capacity through smart motorways.

Without the emergency refuge of the hard shoulder, smart motorways depend solely on live control and monitoring technology to identify broken-down vehicles and close the affected lane. In the absence of a hard shoulder, drivers also need access to an Emergency Refuge Area (ERA) so they can get urgently get off the live motorway.

Provision of both is catastrophically inadequate, and many people are dying as a result.

The police say they were told the technology would be so advanced as to be instantaneous. In fact, as Panorama reveals, one M25 warning sign was out of action for 336 days, while the radar Stopped Vehicle Detection (SVD) technology promised for smart motorways has only been installed on about 6 percent of the smart motorway network—two sections of the M25. The response of Highways England to any criticism has been one of murderous complacency: they now pledge that radar will be installed “within three years.”

Highway England’s chief executive Jim O’Sullivan has acknowledged that radar technology could have saved lives. The organisation told a transport committee in 2016 that they would adopt it for subsequent schemes, but nothing has been done.

A Highways England report has admitted that CCTV operators take an average of 17 minutes to spot stranded vehicles and then another three minutes before the lane closure sign is activated. It then takes on average another 17 minutes for the vehicle to be recovered. Drivers, as Panorama stated, are left a “sitting duck for more than half an hour.”

The same report also found that drivers were three times more likely to break down in a live lane if there was no hard shoulder.

On the M42 test area, ERAs were around 600 metres apart. As the network has been rolled out, ERAs have been up to two-and-a-half miles apart. According to documents seen by the Times, greater distances between ERAs were adopted as a savings measure. The Department of Transport raised concerns that this might result in corporate manslaughter charges.

The hard shoulder is generally not as wide as a live lane in any case. In the process of conversion smart motorways gain an extra live lane by reducing the width of all lanes.

In the event of a breakdown, therefore, drivers and their passengers confront the terrifying and dangerous alternatives of staying in their vehicle in the hope that the obstruction will be recognised and the lane closed quickly enough to protect them, or of ending up in a narrow band of live motorway lane.

Both are extremely dangerous for those stranded and all motorway users. Panorama broadcast a harrowing 999 call made in December 2017 from a driver who had broken down on the M6 with his family in the vehicle. He is explaining that they are stranded in a lane of traffic when we hear him say, “Shit,” and then the terrible sound of a collision. BBC reporter and programme narrator Richard Bilton shows photographs of the crumpled vehicle that had been hit by a lorry at 50 mph. Miraculously, there were no fatalities.

Many others have died. In June last year, Jason Mercer, aged 44 and Alexandru Murgeanu, 22, were involved in a minor collision on a smart motorway section of the M1 between junctions 34 and 35, near Sheffield. They stopped to exchange the legally required insurance details, but there was no ERA for a mile.

Jason and Alexandru were trapped on the inside lane of an All Lanes Running (ALR) motorway. These have had the hard shoulder permanently removed and changed into a live lane.

Smart motorways depend on the flawed notion that stopped vehicles are noticed immediately and that lane closure follows instantaneously. Jason and Alexandru’s stopped vehicles were not noticed for more than six minutes. In Bilton’s words, “There was nowhere for them to go … all they could do was stay in this lane.”

The lane was only closed after the two men had been hit and killed by a lorry.

The deaths of Jason and Alexandru meant that four people had died just on that stretch of motorway within the space of a year.

Claire Mercer, the widow of Jason, is interviewed by Bilson and says of smart motorways, “They don’t look that different. There is still that lane there. It’s still there. It’s just that nobody knows how to use it.” 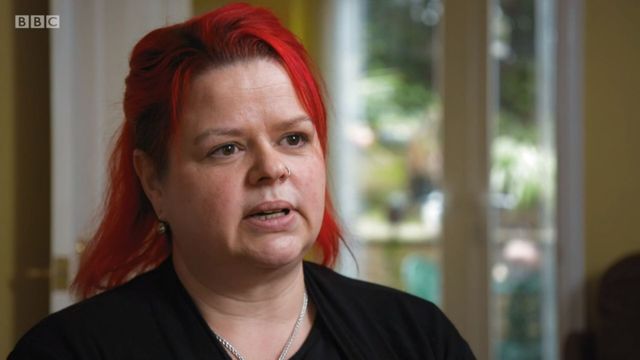 The government’s own guidelines reflect the chaotic situation facing motorists as they advise using an emergency area “if you can reach one safely.” If it is possible to “leave your vehicle safely” they advise contacting Highways England via roadside emergency telephones. If you cannot reach an ERA but the vehicle can still be driven, “move it to the hard shoulder (where available) or as close as possible to the nearside (left hand) verge or other nearside boundary or slip road.”

Transport Minister Grant Shapps confirms to Bilton that the breakdown advice is “stay put,” but this, as the needless loss of life proves, is enormously dangerous if the lane remains open or emergency vehicles cannot access the site because there is no hard shoulder to use. The emergency vehicles sent after Jason Mercer and Alexandru Murgeanu were killed were delayed by lengthy traffic queues.

Meera Naran’s eight-year-old son Dev was killed on the M6 in May 2018 outside Birmingham. The car, driven by his grandfather, got into trouble on an elevated section of motorway where the hard shoulder was a live lane. The car had only been stopped 45 seconds when it was hit by a lorry.

The lorry driver, speaking anonymously on Panorama, and explaining that he had had no time to stop, said the accident happened because there was no hard shoulder. His pain at going back to the car and finding Dev was evident.

The Sunday Telegraph learned of an earlier fatality at the same spot. Jamil Ahmed’s broken-down car was not spotted, the lane was not closed, and he was hit and killed by a lorry. The coroner in that case announced a fear of future deaths report, but this was not issued owing to “administrative error.”

Sir Mike Penning, the Tory Transport Minister responsible for agreeing the scheme in 2010, now heads an all-party parliamentary group on roadside rescue and recovery. This group has just called for further rollout of smart motorways to be halted. On screen Bilton tells Penning he “signed off on something that wasn’t delivered, and what was delivered is dangerous.” Penning responds that the present scheme “should never have happened.”

Highways England deny responsibility by shrugging that it had been “signed off by ministers.” The body have been criticised for their disingenuous presentation of statistics, blandly maintain that smart motorways are as safe as conventional motorways.

In calling for a suspension of further rollout, Penning accused Highways England of “a shocking degree of carelessness.” In an admission of government callousness that has cost dozens of lives, Penning insists ERAs must be built every 800 metres, in line with the M42 pilot: “smart motorways today do not resemble the designs I signed off.”

Last October, due to growing concern and media coverage of the number of deaths, the government was forced to launch a review into smart motorways. Shapps is seen squirming on Panorama as he tries to defend the indefensible—the continued existence of growing sections of the motorway network that are inherently unsafe.

A major weakness of the Panorama film is that it says nothing about the determined fightback underway against smart motorways. Claire Mercer, with the assistance of her family, launched the “Smart Motorways Kill” website and campaign last September which in a few months has done much to alert the public to how dangerous smart motorways are. The website publishes news and information regularly exposing the danger of smart motorways. It has also served to connect bereaved families together.

A leaflet produced by the campaign explains the three types of smart motorways. It states that “‘Budget restrictions’ mean these motorways have been forced on unsuspecting road users with no education on how to use them, with disastrous results. We have to settle for this option (i.e. unsafe roads) while the same government department has managed to increase the number of highly paid executives by 10 fold in just 6 years.”

The campaign has launched legal action in pursuit of a judicial review of the decision to allow smart motorways to be brought in. It has raised, through a crowdfunding appeal, £9,000 of the required £20,000 needed to take the case to court. Claire is also suing Highways England for corporate manslaughter with the aim of bringing criminal prosecutions against individuals.

The Facebook page for the Smart Motorways Kill campaign is here and the Twitter page here. Donations to support the judicial review can be made here. 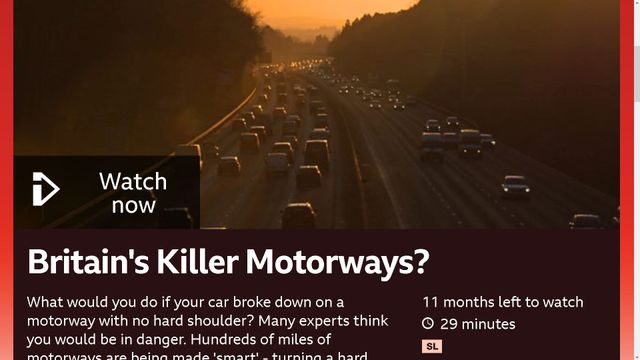 “Britain’s Killer Motorways?” can be viewed by UK residents here. It will be available online via the BBC iPlayer for another 11 months.